Brands are posting more organic content, and paid budgets are likely being frozen, according to a new report.

As the Covid-19 pandemic begins to take a stranglehold over marketing budgets worldwide, social media spending is coming into sharp focus. A new study from Socialbakers reveals that demand for paid ads on Facebook is decreasing as brands respond to the uncertain economic situation.

Overall, the study found that paid ads are decreasing, as is cost-per-click, while organic content is picking up. When comparing paid to organic, Socialbakers found that across all regions brands have been posting more organic content since the start of the year, as paid budgets are likely being frozen because of economic uncertainty. This correlates with the data the agency is seeing on CPC too. 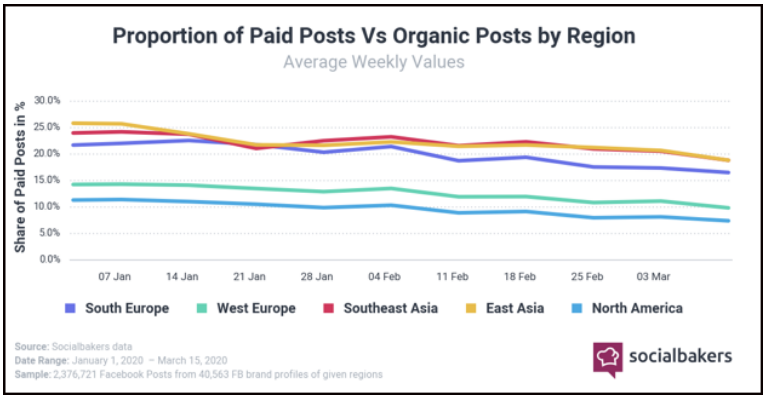 The report is based on more than 2.3 million Facebook posts from 40,563 brand profiles across multiple global regions from January 1 through March 15.

However, the data also show some variance by region. In North America, CPC halved in mid-March to $0.32 compared to $0.64 in December 2019. In Western Europe too, similar metrics are visible; in December 2019, CPC was around $0.43 and by mid-March it was $0.20. In contrast, beginning in March, adspend quickly started picking up in East Asia as business started to resume. 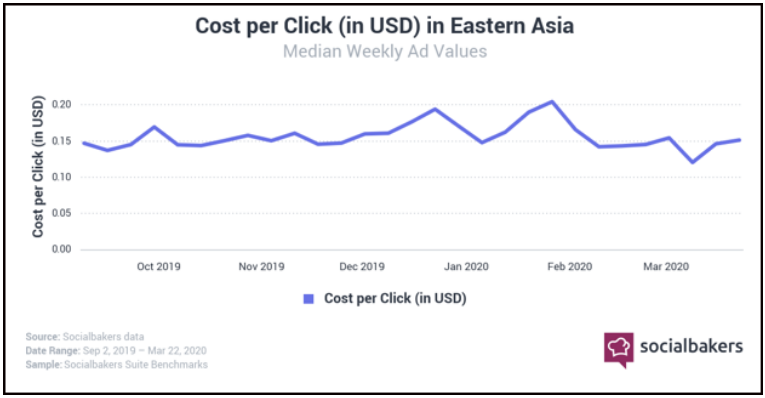 According to Socialbakers chief executive Yuval Ben-Itzhak, brands face tough choices in these troubled times. While crimped budgets may compel them to cut back on social media spending, this is also the time consumers want to hear clear messaging from them.

"(Since) customers want to hear from the brands they follow, cutting back on social media investment could be a mistake on the part of the brands," Ben-Itzhak said. "Brand marketers need to be mindful that, faced with the prospect of social distancing and more time at home, their audiences will be looking to the digital world to keep them feeling connected, updated and entertained."

While Western Europe, South Europe and Southeast Asia all saw spending start to drop from March, North America has seen the steepest declines.