Although the company says pandemic pains have eased slightly, a cost-cutting cull aims to reduce the international agency roster from 160 to just six.

Dentsu is seeing some signs of business recovery from the depths of the Covid-19 pandemic, yet it posted a weak set of numbers for the third quarter of its financial year.

The network, which counts Carat, Dentsumcgarrybowen and Isobar in its stable, reported that for this period, its revenue less cost of sales was ¥193.1bn ($1.8bn, £1.4m), representing a year-on-year decline of 14.2%, even as its operating profit dropped 24.4% to ¥23.1bn.

The Japanese corporation's performance made it the worst performing of the big ad networks for the quarter, behind Omnicom, which posted an 11.7% decline. For Dentsu, which dropped the word "Aegis" from its international unit's name and renamed it Dentsu International, overseas businesses continued to weigh its performance down. 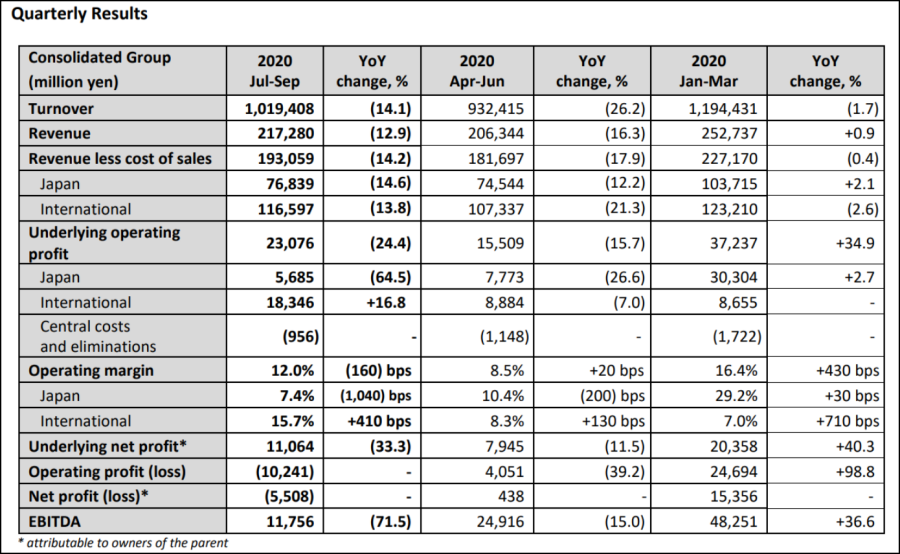 A look at the nine-month performance also gives us some sense of the pandemic pain easing at Denstu. Revenue less cost of sales declined 10.7% (9.3% in constant currency), even as operating profit was nearly flat. The group is tracking ahead of its targeted 7% cost reductions against the planned full-year 2020 consolidated cost base.

“Client confidence has steadily returned through Q3, with a pick-up in new pitch activity in both Japan and internationally," Toshihiro Yamamoto, president and CEO of Dentsu Group, noted in a media release.

"We have won a number of new clients and significantly expanded many of our existing relationships, including Kraft Heinz, American Express and Heineken."

The group has seen "a number of new client wins" in the quarter, but remains cautious on Q4 performance and expects FY2020 organic revenue to fall within the range of 12% to 12.5%, with operating margin around 13% to 13.5%.

As Dentsu considers how to manage the full force of the Covid-19 pandemic, a full-scale agency and brand cull appears to be looming. In the results annoucement, Dentsu noted that some work has already commenced on a planned agency recast. This includes simplifying the Japanese business into four operating pillars and shifting the international business from having more than 160 agency brands to a portfolio of six entities.

"In August this year, the Group announced a comprehensive review and accelerated transformation program involving every region," the network noted. "The final outcome of the review will be presented, as planned, as part of Dentsu Group’s mid-term plan, in February 2021."

Yamamoto said that the network simply had too many brands in its current structure to be viable and a cut was essential to return the group to a path to profitability.

"This radical new structure will be more logical and transparent for our clients, enabling us to serve them better," he added. "It will also enable us to reduce costs significantly as our operations become simpler with more common systems and processes, increasing our use of shared service centres, rationalising office space and reviewing property ownership globally."

Candid in Cannes: How to unleash the power of creative optimisation

Candid in Cannes: Marketers and media reimagine the future of TV advertising