Dentsu Aegis Network has halved its UK adspend growth forecast for 2018, citing the Brexit process and a squeeze on household spending causing marketing budgets to be cut.

In 2016, the year in which the UK voted in a referendum to leave the European Union, adspend grew by 6.1%. DAN has also downgraded its forecast for 2017 adspend to 3.2% from 4% previously.

The report said: "The Brexit process has done little to boost economic confidence and there are concerns that a squeeze on household spending may result in cuts to marketing spend."

Since the Brexit vote, the UK government has begun negotiations with the EU over withdrawal ahead of a proposed leaving date of March 2019. DAN’s report said adspend is expected to grow by 2.9% next year. 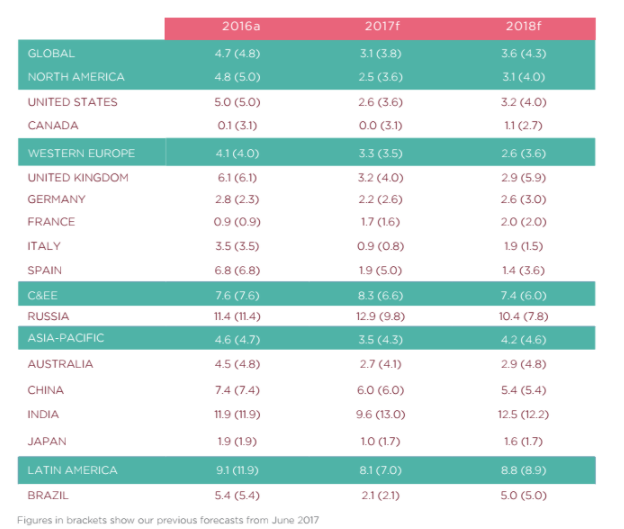 However, Jerry Buhlmann, DAN’s chief executive, said the forecasts show a market in "transformation, but not recession."

He said: "The challenge for brands is to navigate an uneven economic outlook alongside a rapidly evolving tech & innovation landscape. In many markets, disruptive innovation - from mobile, voice activation and new ad tech players – is still providing new sources of growth and we forecast this trend will continue into 2018.

"Succeeding in this environment requires global consistency through appropriate platforms and systems, while also the flexibility and agility to work with a wider ecosystem of tech-enabled solutions. It demands a relentless focus on understanding the consumer, using data to reach real people, driving relevance, addressability and business growth."