While the Japan business has recovered strongly, its international unit, especially APAC was a drag on third-quarter metrics, while customer experience business drove growth in Europe.

Dentsu reported a strong set of numbers for the third quarter of its financial year, as improved business sentiment helped boost performance of both its Japan and international businesses in this period. For Q3, the world's fifth largest ad network reported its revenue increased by 29.7% year on year and operating profit by almost 161%.

As part of its business transformation, the network announced that, after five years as chief executive, Toshihiro Yamamoto will retire from the role, effective on 1 January, 2022. He will be succeeded as chief of the Japanese-based holding company by Hiroshi Igarashi, current president and CEO of Dentsu Inc, the company responsible for Dentsu's domestic operations in Japan. 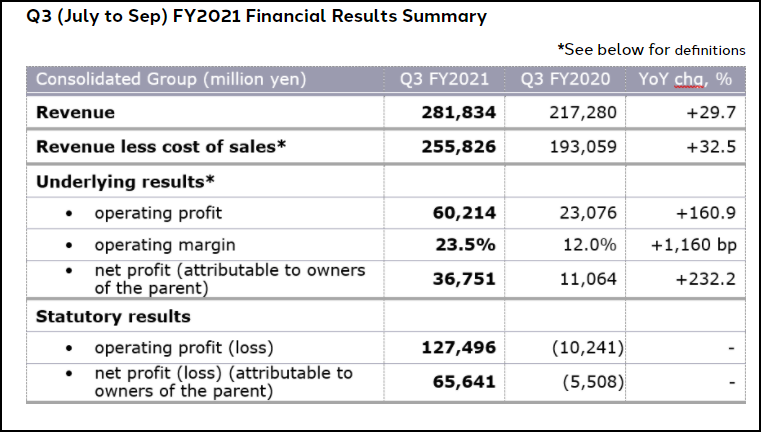 Dentsu Japan posted a recovery across all advertising mediums, with particular improvement in in television and digital solutions, the firm reported. Dentsu International's growth was driven by the continued recovery in media, even as CXM also recorded double-digit organic growth. Strength in the structural growth areas of commerce and experience continued, with demand strong for technology implementation, data services and activation, through creative and media.

In Japan, spend across all advertising mediums continued to recover, with Dentsu Japan Network posting an improvement driven by internet sales, up 35.6%. Content services (up 355.5% year on year), TV (up 35.3% year on year) and creative (up 14.7% year on year) also showed substantial increases. On 28 October, the group announced that it would make Septeni Group a consolidated subsidiary on 4 January 2022, expanding Dentsu Japan Network’s market share to become the largest digital marketing company in Japan.

For its international business, the US market's growth was driven by media, which reported more than 25% organic growth in the quarter, CXM drove growth in Europe, where creative was hit, and in APAC, too, the network reported higher than expected growth in CXM. APAC's geographic performance was mixed, with Australia, Singapore and Indonesia faring well, even as China struggled.

For the third quarter, in terms of organic growth, Dentsu overall grew by 27.8%, with Japan growing at nearly 50% and International more muted at 14% growth. The International business' more muted performance was dragged down by the APAC business, which was up just 7.6% this quarter, compared with 16.3% for the Americas and 12.9% for EMEA. 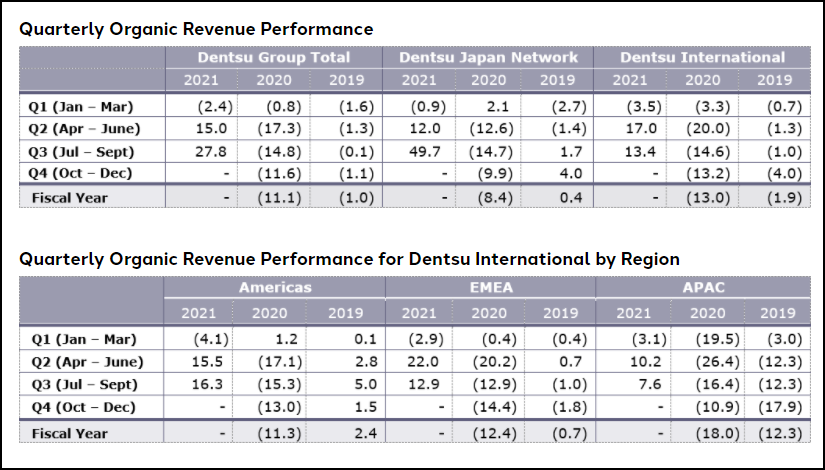 Buoyed by this performance, the group has increased its FY2021 guidance. Dentsu expects to deliver about 12% organic growth for FY2021. Growth in the fourth quarter in Japan is, however, expected to be more modest, leading to guidance of 17% organic growth FY2021, with guidance for Dentsu International at high single digit for FY2021. The cost of business transformation has been reduced from 28 billion Japanese yen, to 16 billion, as of August 2021, on a consolidated basis.

For this same period, the group's underlying operating profit increased by 73.9% (71.7% on a constant currency basis) year on year to 131.8 billion Japanese yen. Operating margin improved by 630 basis points (650 basis points on a constant currency basis) to 18.9%, due to an increase in revenue and effects of cost-cutting. Of this, Dentsu Japan's underlying operating profit was up by 87.4% year on year and operating margin increased nearly 10% to 26.9%. At Dentsu International, profit rose nearly 50% and margin by 3.5%.

A version of this article first appeared on Campaign Asia

Dentsu’s global sustainability lead: ‘We have to address our role in driving consumption’