‘Don’t sweat it’, founders were told by Unilever CEO Alan Jope after sending him an enormous olive branch.

Matt Kennedy and Eddie Fisher found themselves in a bit of hot water after making contentious comparisons between Fussy, the refillable deodorant brand they founded last year, and some of the products sold by FMCG giant Unilever.

But the pair have made good with the owner of Dove, Lynx and Sure after writing a contrite letter to Unilever’s chief executive, Alan Jope, and delivering something of an olive branch – actually more of a tree – to the company’s London HQ. 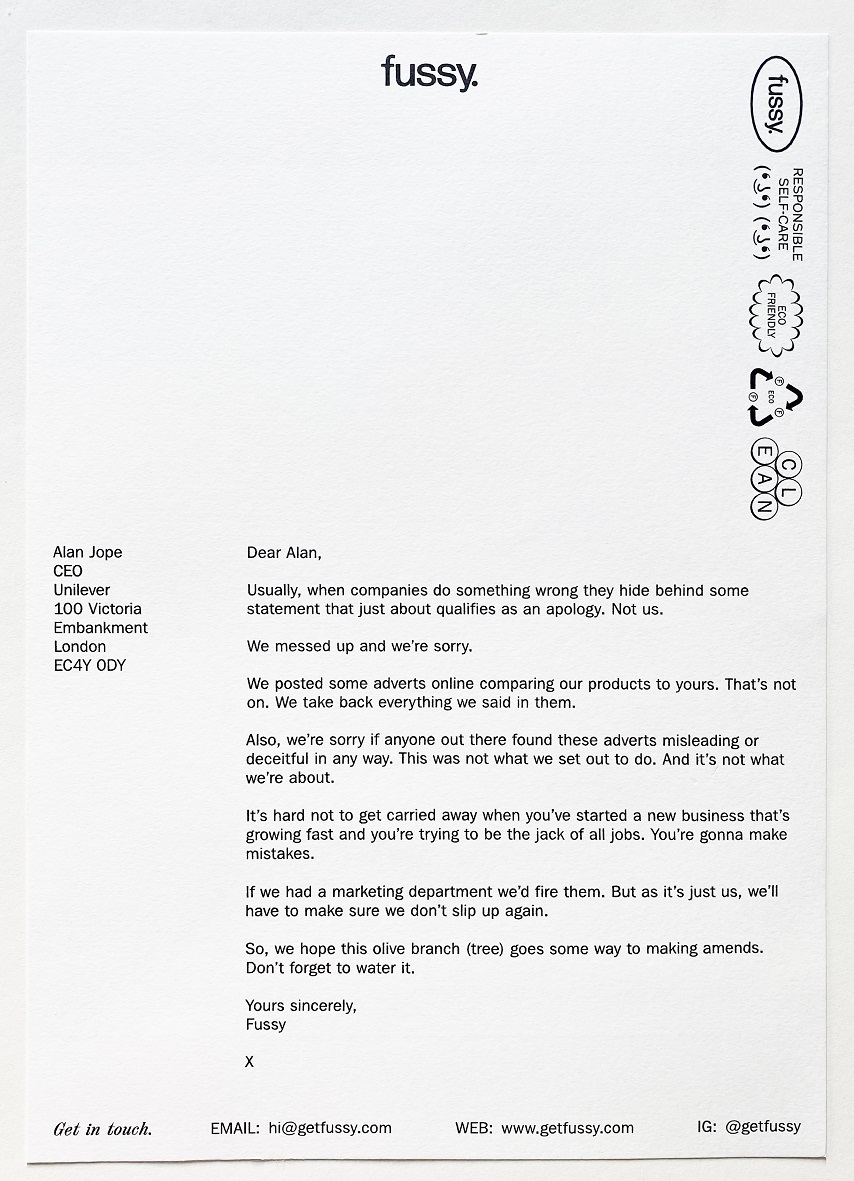 Fussy received a complaint from Unilever’s lawyers over two ads it ran on Facebook and Instagram. In one, a video ad, the camera pans across a series of major deodorant brands, including Unilever’s Dove, Vaseline and Simple, before arriving at Fussy’s product, which features an Apple-esque design (this is Campaign’s opinion, for any Apple lawyers reading).

According to Kennedy, the ad was intended to show “the evolution of deodorant”, but Unilever regarded it as “curtailing the reputation of their brand[s]”.

The second ad, a still, featured a side-by-side comparison of Fussy with Dove deodorant, listing some of the claimed benefits of Fussy: that it is natural, non-toxic and single-use-plastic-free. Kennedy admitted he “regretted” running this ad and agreed with Unilever’s objection that this implied Dove did not have these qualities.

Kennedy told Campaign the ads, which were created and managed in-house, were the result of naivety. The company has only four employees at present, with Kennedy and Fisher handling most operations themselves. “We dropped the ball,” he said. “We’re learning, wearing multiple hats.”

“If we had a marketing department we’d fire them,” they wrote in their letter to Jope. “But as it’s just us, we’ll have to make sure we don’t slip up again”.

This week, they filmed themselves arriving at Unilever’s HQ on Victoria Embankment with the olive tree, bearing a large sign that read “Our bad”.

After Kennedy posted on LinkedIn about the stunt, Jope responded: “Thanks Matt Kennedy for the olive tree. We'll take good care of it. And don't sweat it.”

The duo launched Fussy last October with a Kickstarter campaign, and later raised £500,000 in equity funding. They left their jobs in December to run the start-up business full-time.

Kennedy described their aspiration as “to do for deodorant what Oatly did for milk”. He praised Oatly’s “smart” in-house marketing by saying: “They appear like your mate but actually they are about to IPO.”

He also admitted he could be open to the idea of selling Fussy to Unilever – a common move in recent years for personal care start-ups with an ethical dimension given the FMCG’s own commitment to sustainability.

“Maybe me and Alan will meet at a future date,” he speculated. “We want to make sure whoever we work with aligns with our goals. For all the flack Unilever get, they’ve got some ambitious targets.”

He added: “Alan has my number now.”

The story of a start-up making online ad buying ethical