The build-up to May's General Election could redefine the relationship between the political parties and the mainstream media, with the outcome far from predictable, writes Ben Bold.

If supremacy is in part defined by a party’s war chest, the Conservatives have a distinct advantage.

The UK’s political parties are preparing for battle as 7 May’s General Election approaches. The propaganda machines are rumbling into action, soundbites are being crafted, posters unveiled, strategies planned and tactics devised.

It’s likely to get nasty, and many observers are keenly anticipating it.

Labour on one side, Conservatives on the other

While the Liberal Democrats form one half of the current coalition government, commentators have been quick to dismiss their relevance. It is expected that the Conservatives will be entrenched on one side and Labour on the other, notwithstanding a few peripheral factions mounting guerrilla-style incursions.

Beyond this, if supremacy is in part defined by a party’s war chest, the Conservatives have a distinct advantage.

Their party is expected to outspend Labour 3:1, opting for traditional media, while Labour leader Ed Miliband has said he wants to have 4 million face-to-face conversations with voters, placing an emphasis on door-to-door canvassing.

Labour will spend more on digital and social

"What that probably means is that Labour will spend more on digital and social, and the Tories will spend more on traditional poster advertising," says Will Harris, chief executive of PR agency Mission Media and a former Conservative Party marketing director.

Since the 2010 election, digital has moved up the political agenda, with David Cameron clearly no longer feeling one need be a "twat" to engage with social media, having taken to the world of Twitter and selfies with aplomb.

Social media is massively overrated - it’s great at preaching to the converted and distributing leaders’ speeches or policy points, but political messaging rarely escapes its bubble, unless it’s very amusing.

So 2015 could be the UK’s first truly digital and social-media-led general election.

"User-generated content will play a big part," predicts Labour candidate David Prescott, director at PR agency Commucan. Having worked alongside his father John Prescott, the former deputy prime minister, and Alastair Campbell, Tony Blair’s former director of communications and strategy, on Labour’s 2010 Go Fourth campaign website, Prescott is no stranger to digital campaigning. "‘Photoshops’ and Vines from politicians and the public will be lapped up by mainstream media and rolling news channels," he says.

Richard Huntington, group chief strategy officer at Saatchi & Saatchi, which has worked with both the Conservatives and Labour in the past, disagrees. "Social media is massively overrated," he argues. "It’s great at preaching to the converted and distributing leaders’ speeches or policy points, but political messaging rarely escapes its bubble, unless it’s very amusing." 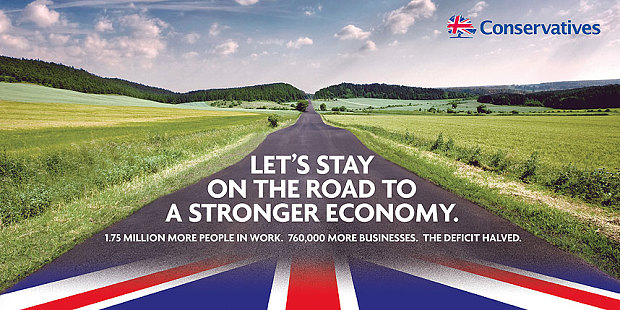 The potential for crossover between traditional and digital media has already been highlighted by an early hiccup for the Tories.

The magnifying power of social media was brought to bear on a Conservative Party poster declaring, "Let’s stay on the road to a stronger economy" (pictured above).

It was much pilloried on Twitter, with users declaring that the image depicted a "road to nowhere" and the road looked "a bit French"; it transpired that the stock photo was of a road in Germany.

The importance of using agencies

For Huntington, the debâcle underlines the importance of parties using ad agencies to deliver strong, strategic messages. "It’s important, because political parties need agencies and make huge mistakes when ads are done in-house. Politicians, by and large, are not good visual communicators."

He adds that the sway of the minority parties should not be ignored. UKIP, for example, has been stealing the limelight of late; its impact on political debate and some marginal seats should not be underestimated.

For Huntington, the behaviour on the fringes will be as deserving of attention as the action on the main field. "It will be interesting to keep an eye on unions, pressure groups, the Taxpayers’ Alliance, Operation Black Vote, Stonewall – the skirmishing round the edges," he says. "A lot of interesting stuff will come out of those organisations and galvanise the LGBT, black [or] Asian vote."

The messages will become more positive as we go into the final weeks. If you stick to negative campaigning, people get sick of it

This inevitable plethora of activity means voters will be bombarded by messages across multiple media. To avoid voter confusion, observers agree that it is essential that parties have an agenda and stick to it, favouring a strategic over a tactical approach.

As Harris contends: "If you only ever react, on the one hand if you’re disrupting your opponent, that’s brilliant, but every day you don’t get [your] story over, it’s good for the other side."

Prescott predicts: "The messages will become more positive as we go into the final weeks. If you stick to negative campaigning, people get sick of it."

However, while this general election campaign may be more digitally driven than 2010, it could still fall to traditional media to tip the balance in the mind of the voter.

"I love the political poster," says Hunt­ington. "Even if, as a paid-for medium, it’s in decline, as a discipline it’s profoundly valuable – it frames the election for the electorate."

Labour's pink bandwagon: the message is the real issue, not the colour

McDonald's, Coca-Cola and Wonga: brands in the Election 2015 firing-line