Director behind Bodyform's latest ad explains how she attempted to represent women's complicated and diverse experiences on screen.

Bodyform’s latest campaign, by Abbott Mead Vickers BBDO, chronicles "womb stories" that often go unseen, including miscarriage, endometriosis, the menopause and deciding not to have children. Director Nisha Ganatra (pictured, below) took on the task of bringing those tales to screen and representing the myriad and complex experiences of living with periods, vulvas and wombs. She spoke to Campaign about how she made the ad and what needs to change to achieve more equal representation in film.

Why did you want to direct this ad?

This campaign is legendary and to be a part of it is a dream. The script and concept was completely unique, like nothing I’ve seen before. The breadth of women’s experiences that this one ad was communicating really inspired me. Plus, to be able to carry on the incredible artistic and taboo-breaking storytelling that had come before in this campaign was at the same time intimidating and inspiring. 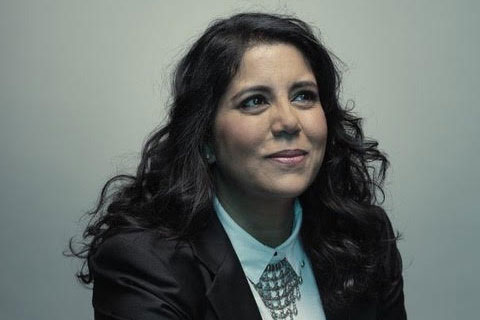 What was your vision for '#Wombstories' and what did you hope to achieve?

I wanted to make something really visceral and honest and to do justice to the beautiful and complicated stories our collective uteri hold. The final film is an expression of all of our stories. I hope that when you watch the piece, you reflect on your own experience and those of women around you, and hopefully feel seen and heard and most importantly represented.

Why did you mix live action with various forms of animation? What effect does this have on the storytelling?

I have to give credit to AMV BBDO – Nadja [Lossott], Nick [Hulley] and Edwina [Dennison] brought the best animators together with this one goal in mind. They always pushed us to go further, take bigger risks and to make sure we were grounded in truth. I hope the effect on the storytelling is that it allows for heightened experience for the internal stories, whether they are pain, heartache, acceptance or joy.

Can you explain the music choice?

I love the song and I love Pumarosa – such honest and intimate music with a very cool and catchy beat. As for why this was the right choice for "#Wombstories", the mood of the song had a big swing of tone and emotion, just like I hope our film does. It goes from hurt to strength, frustration to joy. We tried so many songs and ultimately kept coming back to this track, because it could travel through the emotions with us without pushing them and without overshadowing or leading the audience as well.

The cast in the ad is quite diverse. Sometimes when brands attempt this it can come across as tokenistic, so what approach do you take to casting in an authentic way?

I tried to tell a story that is universal but at the same time very personal and unique to every woman. So of course it was important that I represented women who came from different backgrounds, because all women come from different backgrounds. We were fortunate to find great representation with really talented actors to bring these stories to life. Even though the full cast is not in every version of the ad, it is something we thought a lot about and were attentive to making sure it wasn’t tokenistic.

How did you find the 'womb stories' featured in the ad? Was there any story that particularly resonated with you?

There is a lot of me and my experience in this – as someone who sought fertility treatments, gave birth and was shocked at how little I knew about what was going on with me and what would happen during pregnancy, but especially after giving birth. No-one tells you about the mesh underwear or that you will bleed for a month. I got to bring a lot of that to the story.

I also had watched my mom and other women I know experiencing menopause and hot flashes as hilarious and I had never seen them depicted with that sort of comedy before. Hot flashes and menopause are usually shown as a depressing end of the story – for us, it was just the end of reproduction, but the beginning of an entirely new exciting phase of life. So it was important for me to bring some comedy and levity to an experience we all will go through at some point in our lives.

The Black Lives Matter movement has shone the spotlight (again) on the lack of diversity in industries including film. What needs to change to ensure this isn't just a trending topic that fades away and real progress is made?

People need to hire women and people of colour, even if they haven’t done the job before. Rather than just keeping up the status quo, it’s the responsibility of the people with power to lift up those without. It would have been easy to say: "Nisha has never done this, so let’s not hire her." Lucky for me, the people in charge of this campaign are brave and also committed to doing the right thing. See if someone has the experience to do the job and then hire them to do it. If you keep giving the work to the same small group of people who have done it over and over, then nothing will ever change.

Pick of the Week: Bodyform's '#Wombstories' is an intimate look at women's experiences

Bodyform chronicles 'womb stories' in all their emotional complexities