In the run-up to the New Thinking Awards, in partnership with Sky Media, Campaign will be publishing case studies from a selection of the categories. First up is the Big Idea, over the coming weeks we will publish all the shortlisted entries in this category.

With the organising thought "Lost for words", we were able to make the inexpressible taste of Domino’s expressible for Social Snackers – our young, mobile-first, internet-native audience.

We took the language of the internet to TV and radio, creating executions reflective of the social phenomenon that is face-swapping. A Snapchat filter allowed Domino’s-lovers to express their "tastebud-tinglin’" emotions for their pizza.

We launched a GIPHY channel, bursting with a "mouth-boggling" collection of "GIFEELINGs", where fans could finally pinpoint the exact way Domino’s makes them feel. Facebook, Instagram, YouTube, Twitter and influencer partnerships were also used to further spread the "mouth-bogglin’" feeling.

This campaign disrupted the category norms; it disrupted audiences in their homes, on their desktops and on their phones. "Lost for words" didn’t just drive sales, reach and engagement; it broke into UK culture.

Through a better understanding of our audience from social research, we were able to create a "mouth-boggling" idea that seamlessly transcended from broadcast media to Snapchat and GIPHY, as well as more traditional digital channels. The strength of the core idea allowed us to disrupt across different media and for our digital audience to join in by creating their own "boggling" content.

How we measured its success

We measured the success of the campaign throughout its 10-week run, breaking it down into three key areas: business performance, participation and brand effectiveness.

Snapchat and Giphy provided us with our performance data, along with KPIs – which we doubled. More traditional digital channels (YouTube, Facebook, Twitter and Instagram) were measured in-house and against our Domino’s social tracker to identify performance – again, KPIs that were well-beaten.

As the campaign has only just concluded, we have not yet measured the campaign on our quarterly brand tracker. However, using quantitative and qualitative surveys at early campaign stage, we are able to confirm a positive impact and cut-through.

Domino’s is officially the biggest pizza company in the UK – and, unofficially, the tastiest. Every food brand talks about having great taste, but without hard facts or stats, it’s tough to stand out.

From our ongoing brand tracker, we knew taste was the key purchase-driver in the market, but with the rise of aggregators such as Just Eat and Deliveroo, it became more important than ever to play back to consumers just how tasty our food is – something delivery services can’t do. It was time that Domino’s owned "taste" within the market. Therefore, we were seeking a disruptive way of communicating this in the key spring campaign window. A generic "taste" ad listing our credentials wouldn’t provide the front-of-mind availability; nor would it fit with our "POP" tone of voice and #Greatness brand strategy.

So, we asked ourselves: how do you describe the delicious taste of Domino’s pizza? The answer: we didn’t know – but figured our customers would be able to tell us.

We developed a bespoke piece of social research to unearth the language and emotions used by Social Snackers. By analysing more than a year’s worth of Domino’s (and competitors') social data (Facebook, Twitter, Instagram, blogs and forums, plus 60,000 Domino’s feedback surveys) we were able to identify the overriding emotions related to each brand on each platform – from anger to joy, and anticipation to trust.

The outputs allowed us to:

a) Understand how our customers felt about the taste of Domino’s pizza.

b) Discover the emotional opportunity in the market.

c) Ultimately develop a strategy based on insight, not product RTBs.

It was clear from the research that Domino’s pizza occupies the emotional territory ‘joy’, but just as interesting was the language our consumers used to communicate this feeling when it came to taste. In fact our fans couldn’t, and didn’t, put it into words: more so than for any other brand, they used the emerging emotional language of the internet: GIFs, memes, emojis and CAPSLOCK. Domino’s is clearly so overwhelmingly tasty, people simply can’t find the words. 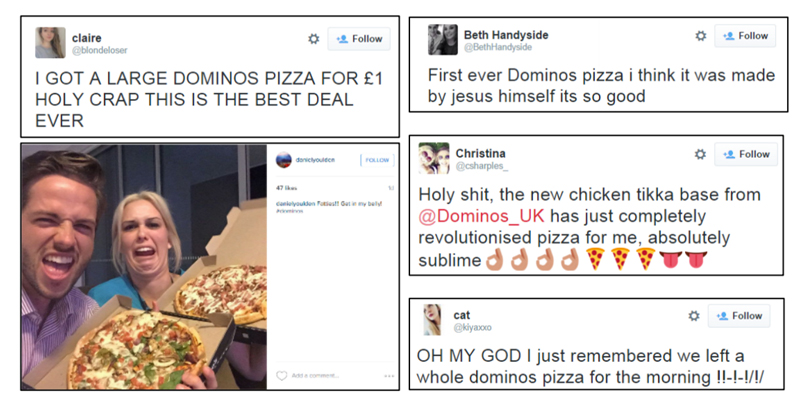 We saw this as an amazing opportunity to connect with pizza fans and all-round Internet natives in an entirely new way – or, in fact, their way. And with this, our central idea was born, as was our way of expressing it.

Using the strategic platform "Lost for words", we were able to land our taste credentials with pizza-lovers everywhere and anywhere.

The idea was simple but distinctive: highlight the "mouth-boggling" effect of Domino’s. Then give our fans the tools they need to express their feelings for Domino’s pizza. Our creative ambition became to "express the inexpressible". Starting online, we took the language of the internet to TV and radio, creating executions reflective of the social phenomenon that is face-swapping.

Purposely disruptive and unconventional, the ads cut through the clutter and got Social Snackers chatting online.

We built on this by driving engagement in channels where our audience could have fun with the idea. We fanned the flames for face-swapping fanatics through the creation of a bespoke Snapchat lens, which allowed Domino’s-lovers to express their "tastebud-tinglin’" emotions for their pizza. And they took to it in their droves, with 8.5 million plays and more than 10 million views (double Snapchat’s benchmarks).

We even launched a GIPHY channel; bursting with a "mouth-boggling" collection of "GIFEELINGs", where fans could finally pinpoint the exact way Domino’s makes them feel. Influencers, including comedian and internet-video star Cian Twomey and Liverpool FC player Roberto Firmino, created their own "mouth-boggling" renditions, to our audience’s pure delight. And Channel 4’s Comedy Gala even selected the TV spot to be memed by Alan Carr during its infamous ad breaks.

Mission accomplished – we expressed the inexpressible for Domino’s fans everywhere.

And we had managed to come full circle, from a rich social insight to a whole new batch of ecstatic social interactions – ready to inform our next campaign.

This campaign disrupted the category norms; it disrupted audiences in their homes, on their desktops and on their phones. "Lost for words" didn’t just drive sales, reach and engagement; it broke into UK culture.

Domino's signs sponsorship deal for The Voice on ITV