Campaign was created by Havas London.

Durex has launched a TV ad promoting safe sex as lockdown measures continue to ease across the UK, in light of staggering statistics on the spread of STIs.

Created by Havas London and quoting Durex’s "manifesto" on safe sex, "Let’s not go back to normal" functions as a "call to arms, legs, bums and private parts" to wear a condom when it's time to "get back out on the streets and jump back in the sheets".

With reference to "rubbish excuses" from men to not wear a condom and "shaming women for even carrying one", the spot urges people to practise safe sex in an attempt to reduce the spread of "needless STIs", which one million people contract every day worldwide.

The film characterises 2020 as "pretty weird" yet "really important" as a result of the coronavirus, with the narrator claiming: "The world has never been so ready for change, so let’s all change it for the better."

Launched alongside social media activity, the work was written by Greg Ormrod, art directed by Thomas Worthington and directed by Ben Tubby and Dan Tubby through Tubby Brother Films. 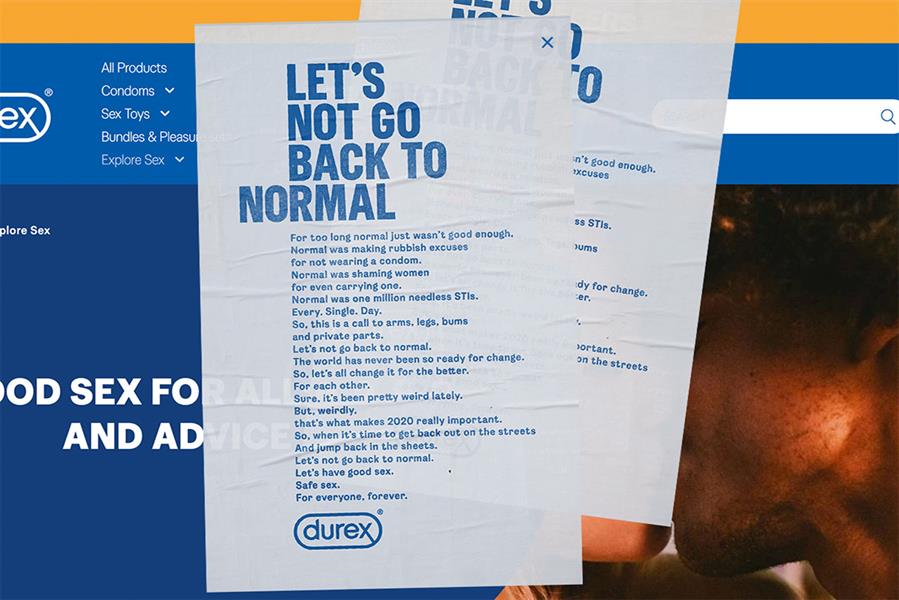 Durex’s "Let’s not go back to normal" campaign kicked off with out-of-home activity in May that featured the brand’s manifesto in full.

This follows a brand relaunch that coincided with Valentine’s Day and saw Durex quash sexual taboos and stigmas in favour of more positive views about sex.

Durex "Let's not go back to normal" by Havas London