Durex’s latest ad campaign centres on one of the most-hated words in the English language: moist.

The ad, by Havas London, continues Durex’s “Ladies let’s lube” campaign, which launched in 2019 and aims to destigmatise female sexual discomfort and promote a solution to it – lubrication.

In the film, a series of diverse women say the word “moist” directly to camera and grow progressively more comfortable with it the more they say it. Out-of-home executions, which will run at locations such as Westfield Square at Westfield London, feature the word “moist” in large, bold type. 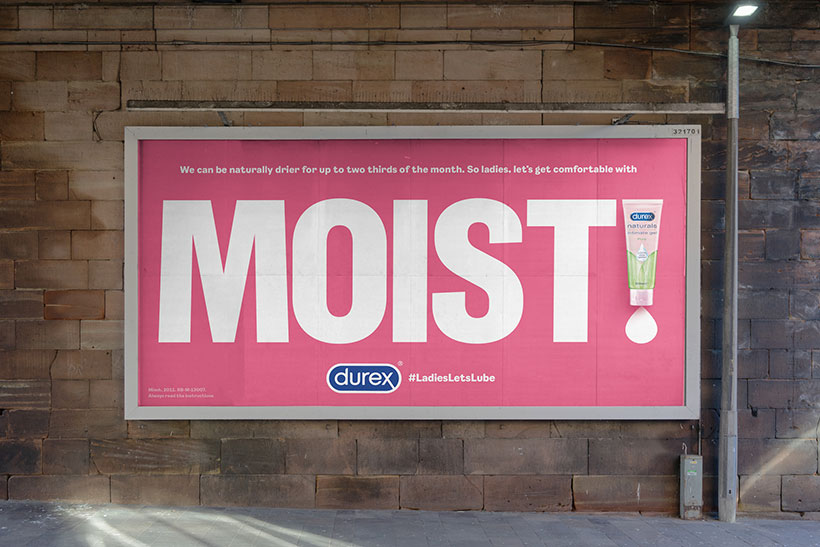 The campaign will also comprise social media, video on demand, PR, influencer partnerships and the sponsorship of podcasts including No Holes Barred, Loose Lips, Dear Joan and Jericha, The Girls Bathroom and The Emma Guns Show.

Moist is commonly known as an unpopular word. There are Facebook groups dedicated to its derision – including one called “I HATE the word MOIST!”, with nearly 3,000 members – and even scientific studies have found that large parts of the population dislike the word.

But moistness is also key to comfortable sex for many women, Durex says in its campaign. Women can naturally experience dryness for up to two-thirds of their cycle and seven out of 10 have reported feeling discomfort during sex, according to the brand’s study.

Vicki Maguire, chief creative officer of Havas London, said: “Moist. It’s the shortest script we’ve ever written, and yet the most uncomfortable. It’s the one word above all others guaranteed to provoke a visceral reaction. Thing is, it’s taboo just like female pleasure is taboo.

“Our ambition is to make ‘moist’ just another word – because once we’re comfortable with that, we can start getting comfortable talking about ladies’ satisfaction in the bedroom.”

The work was created by Greg Ormrod and Thomas Worthington and directed by Kate Cox through HunkyDory. Zenith is the media agency.

Lindsay Forbes, category manager at Durex, added: “Our aim at Durex is to liberate good sex for all. For women, who can be naturally drier down there for up to two-thirds of the month, that may well involve lube. Indeed, nine out of 10 women say sex feels better with it. Yet it remains disproportionately stigmatised – in part, because we’re uncomfortable even talking about the problem, much less doing anything about it.

The changing rules of sex in advertising