Blu has undergone a major transformation recently in regards to its digital strategy, but has it's vigorous social-media activities had a positive impact following its May rebrand?

The burgeoning UK electronic cigarette market welcomed a new brand to the sector and said goodbye to another in May. After acquiring Skycig, US e-cig company Lorillard decided to rebrand it to Blu, already a major brand across the pond, and committed to spending £20m on marketing.

Since then, Blu has wasted no time getting stuck into building notable social followings. Over the summer, it has amassed more than 19,000 Facebook "likes" and 2900 Twitter followers. Its approach neatly translates across its presences and its focus on a youthful market is evident through its online content.

One of Blu's standout digital campaigns, which kicked off in August, is an eight-part online electronic-music series aimed at showcasing the lifestyle, history and evolution of the DJ.

Some of the e-cig players have produced gimmicky marketing of questionable taste, but with its clear youth-market focus, Blu's strategy looks like it will work in the long term.

29% of commentary on Blu was about the standard of the product. Build quality came in for criticism from the majority of those commenting on this aspect (60%). The positive remainder complimented the battery life of Blu products compared with other brands.

38% of commentary about Vapestick centred on the recent hiring of actress Mischa Barton as its brand ambassador. A number of commenters felt negatively toward the campaign. 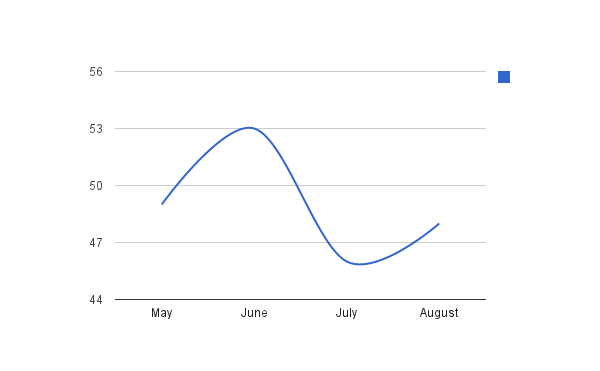 49 - MAY - Blu threw a launch party on 8 May to mark its rebrand from Skycig. Celebrity couple Professor Green and Made in Chelsea star Millie Mackintosh were in attendance. Neither tweeted about it, but the brand was left with a host of images it shared across its social presences. It launched blucigsuk on Instagram.

53 - JUNE - Blu made its debut on TV with "Freedom for the taking", an ad showing how a derelict space is turned into a party venue. The ad was supported across digital, as the Blu Music Tour got under way and was promoted through Facebook and Twitter.

46 - JULY - Toward the end of June, Blu's chief executive, Jacob Fuller, told The Daily Telegraph that the brand was partnering Lady Gaga for a product placement. The news spread across the world of social, but Blu's US PR agency denied the story. Forbes then ran a story on the CEO's mishap, which was read more than 2600 times.

48 - AUGUST - Blu announced a partnership with Academy Music Group and Live Nation Entertainment, opening opportunities for exclusive advertising. The partnership has already created engagement on social, with Blu offering its fans the chance to win tickets to O2 Academy gigs throughout the month.

Social Tracker is powered by Yomego and Human Digital.

E-cigarettes can be shown on TV under new rules