The easyJet chief executive wants the carrier's repositioning to highlight its value proposition and assign its spats with competitors to history.

It is on an easyJet flight, wedged between chief executive Carolyn McCall and the carrier's marketing director, Peter Duffy, that Marketing witnesses first-hand the boss' dedication to the business.

McCall endeavours to speak to every crew member during the flight, and before our interview she walks up and down the aisle with a bin bag, collecting passengers' rubbish. It is a task that she carries out every time she flies on one of her planes.

Almost two years into the role, which she took following a turbulent four-year stint as chief executive of Guardian Media Group (GMG), McCall is bedding in a strategy to elevate easyJet from its budget no-frills base.

For McCall – an OBE, no less – staff satisfaction is key to the business. Indeed, she likens the cabin crew to a sales and marketing team. 'They're incredibly energised and give me a lot of energy – they are our ambassadors,' she adds, settling into the two-hour flight from Nice to Gatwick.

It was not always that way, however. 'When I started, I had so many negative emails from pilots and cabin crew, all saying "this is wrong, that is wrong, no one listens to us". It was a constant barrage,' recalls McCall.

She received so many emails in the first six months that she took to addressing her inbox at night, as there was not enough time in the working day. Then came a shift. 'It was Easter 2011 and I was on the first day of a holiday. I saw an email from a pilot and groaned, but, of course, opened it – you can never really be on holiday in this job.'

Instead of the kind of email to which she was now accustomed, McCall was relieved to read a message from a pilot thanking her for his stable roster, which meant he could spend Easter with his family for the first time in five years. 'This was the turning point for me,' says McCall – confiding, however, that he concluded his email with: 'PS Crew food is still shit.'

The numbers back up this anecdotal evidence. In 2010, the airline's average punctuality rate was just 51.3%, to the dismay of pilots, cabin crew and passengers alike. The airline was known for its larger-than-life founder Sir Stelios Haji-Ioannou, but, more than that, for its unreliability.

At the time, easyJet and Ryanair were still trading blows in a tit-for-tat press-ad war, and the latter was quick to label its rival's performance as worse than Air Zimbabwe. According to Duffy, 'that was the one that hurt'. Indeed, the image used in Ryanair's ads – of Zimbabwean president Robert Mugabe, under the headline 'Here's easyJet's new head of punctuality' – is hard to forget.

Today, easyJet's display boards at the airport gates remind passengers: 'If you're late, we won't wait.' Last month it recorded a 94.2% average for on-time performance, with a 79% average for the full 2011 financial year. It has introduced 'speedy boarding', is trialling allocated seating and pushing its business-traveller model.

While her lengthy career at GMG was marred by criticism of spending £100m on relaunching The Guardian in a Berliner format, which failed to stem its circulation bleed – not to mention the £143,000 bonus she received as she departed the loss-making group – McCall's record at easyJet is robust.

The carrier's pre-tax profits jumped from £154m to £248m for the year to September 2011, an increase of 16% – despite fuel hikes reaching £100m in overall costs and thanks, in part, to higher baggage charges. The airline now flies more than 580 routes across 29 countries, and has ground down its expected pre-tax losses for the six months to March 2012 – traditionally a loss-making part of the year for airlines – from between £140m and £160m to between £110m and £120m.

These numbers are, perhaps, under no greater scrutiny than that from easyJet's outspoken founder. When the airline's executive pay and bonuses were revealed in February, McCall's £1.5m salary and bonus angered Haji-Ioannou, who has publicly accused management of using the company as their 'personal piggy bank', describing them as 'easy to replace'.

He retains a 37.2% stake in the business, and cannot be ignored. So how does McCall deal with his constant threats of legal action and lobbying of other shareholders – all of which never fail to make national headlines?

'It is important for us to have an open, constructive relationship with Stelios as our biggest shareholder,' she says, diplomatically. A strong component of that, however, is ensuring that the management team is not distracted by his activities. 'They have their heads down, they deliver the results. We drive returns for our shareholders: that's how we deal with it. My role is to run and keep the airline on track. It is that performance upon which we are judged.'

This is not the first time McCall has had high-profile corporate politics to deal with. While at The Guardian she also held a non-executive directorship of Tesco. When it sued The Guardian for libel, McCall initially tried to avoid potential conflict by removing herself from any discussions. However, she was forced to resign her Tesco role.

Nonetheless, McCall learned valuable lessons working with the retailer. 'I got a lot out of it in terms of operating thinking, low-cost philosophy and simplicity. "Keep it simple" was the mantra there and has worked for Tesco for a long time,' she says.

Equally, she learned from The Guardian's 'masterful PR and communications' strategy, where 'the brand always came first and you would never compromise brand integrity, regardless of who headed marketing'.

Certainly, lessons from both businesses can be seen in her approach at easyJet, where 'the brand and business go hand-in-hand'.

The airline is still built on a low-cost operating model, but McCall now wants the easyJet brand to stand for value for money – a marketing challenge that touches all parts of the business, from customer experience to big-budget advertising.

Duffy, who describes McCall as having 'a very distinct style and a personality that permeates through the airline', worked closely with her on the new strategy to ensure that consumers see the value proposition within easyJet's marketing. Its £50m pan-European campaign, launched in October, signalled the shift to a value focus, using the strapline 'Where are you going?' (see below).

According to Duffy, the idea is that easyJet helps people capture those 'great moments that they remember as they travel across Europe, not just those stereotypical pictures of the Eiffel Tower or other landmarks'.

McCall is not letting easyJet shy away from its roots, though. 'We'll never move away from price – it is the cornerstone of what we do. But now we communicate destination and service.'

Behind the scenes, she has worked to put the right leadership in place to make it 'a hell of a lot more manageable'. This led to her poaching Duffy from Audi as a key member of her management team.

McCall has been careful, too, to ensure that the new ethos is felt beyond head office. She has included the airline's top 100 managers in her 'strong team', ensuring that staff live and breathe the strategy. These people, she says, all contribute to how the carrier recovers cost and drives revenue.

She has also sought to transform easyJet into a more potent pan-European brand, by appointing country directors for each market. As a board member, Duffy then works with each of them to ensure the brand architecture is developed for their needs.

McCall believes this strategy deals with a key image-perception issue. Consumers, she claims, now see 'that there is a lot of blue water between us and Ryanair, and very little between us and British Airways'.

While it might seem counterintuitive to move away from price-first marketing in the current climate, McCall says the downturn has, in fact, sped up the process. 'People are more likely to sample and reappraise us when things are very tough than they would when things are buoyant,' she explains.

Now viewing BA, Air France and KLM as the competition, the days of easyJet's ad clashes with Ryanair are over. The feeling is not mutual, however. Speaking to Marketing last week, Ryanair's famously combative chief executive, Michael O'Leary, declared: 'EasyJet is not even one of our competitors, their on-time performance is still awful.'

McCall's team now saves its energy for what she describes as the 'competitive battles that are live and meaningful'. So far, this has played out in a cheeky press ad parodying BA's brand campaign, with the strapline 'To fly. To save.' Duffy is unable to hide a smile, saying: 'It's irresistible, isn't it?'

McCall's focus is firmly on how to keep the carrier competitive in an industry being weighed down by taxes and surcharges.

Her strategy focuses on delivering its 'lean' business plan, which is centred on containing costs, while increasing revenue per seat. This is where the targeting of business travellers comes in, offering speedy boarding, flexi-fares and waiving the weight limit on hand luggage, among other perks.

For now, McCall's main challenge is to improve the customer journey for everyone through ground operations, creating consistency. 'When dealing with 56m passengers a year, you have to be completely black-and-white with policies you implement,' she says, as she resumes her chat with the cabin crew.

On her appointment in 2010, easyJet chairman Sir Michael Rake said that McCall had the strategic ability, operational capability and passion to drive easyJet through the next stage of its development. Nonetheless, piloting the orange airline from budget to a more aspirational positioning could be her biggest challenge to date. 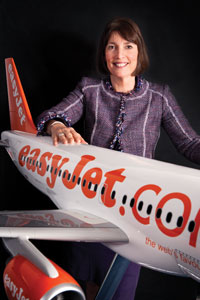 'Where are you going?'

The airline launched its £50m pan-European brand campaign in October last year, asking: 'Where are you going?'

The ads marked a significant shift in the brand's advertising, demonstrating a subtler tone of voice and shift away from price-led press ads.

In easyJet's latest brand work, it targets its business customers in an outdoor and below-the-line push, using the strapline 'Business sense, not business class.'

EasyJet plays on England woes with ads for European flights

Helen Edwards: Get personal with your brand