The Economist became a victim of its own success. As circulation plateaued and conversion declined, it was time for a radical change.

It sounds like a contradiction to say that we were a victim of our own success – but we were. A steady gain of millions of new readers that began in 2015 was preceded by a dip in 2013.

The dip was the unintended consequence of a brilliant marketing campaign that ran from the late 1980s to the early 2000s.

For decades, The Economist’s iconic out-of-home work cemented its reputation as the publication for the man who wants to get ahead, with posters such as: "I never read The Economist – Management Trainee. Aged 42." Unfortunately, they worked so well that the traditional prospect base was tapped and those who saw themselves outside that group felt distanced – the publication was not relevant to them.

Circulation plateaued and conversion declined. It was time for a radical change. Our brand response work started in the second half of 2014 when we began to surface our content in surprising, but contextually relevant, places – aiming to give those who engaged with it their own "Economist epiphany" in which they realised the publication was absolutely relevant to them.

The strategy came from an insight that underpins the whole product: "There is nothing more provocative than the truth." We realised that it was our content that best sold the publication, and we needed to serve it to our potential readers where they were already grazing for similar material. In short, our research concluded that people would subscribe if they only took the time to have a look at our content – so we took it to them.

To lure our globally curious audience, we did three things. First, provoke them – using, in our creative treatment, enticing questions and provocative insights with humour, simplicity and a breadth of topics.

Second, we found these prospects where they were already engaging with relevant topics and directly linked them to our inclusive truths and relevant articles. Lastly, having made them curious, we let them read the related article and nudged them toward more content, knowing it can take exposure to four or five articles before undertaking subscription.

We also devised an algorithm that developed content in sequence, gradually learning which topics generated the warmest prospects.

How did it work? We ran a banner on associated editorial – for example, an article in The Guardian with a headline that read: "NSA surveillance reform bill pushed forward for vote in Senate." Our own banner read: "This ad knows who you are. How do you feel?" And when the reader voted, they were directed to an article in The Economist on internet privacy and data tracking.

Going beyond the news of the day, we created an ad with a visual consisting of prison bars and the line: "There are plenty of gay bars in Africa." Once clicked, this provocative ad led through to our article on why gay rights are human rights around the world, including Africa. 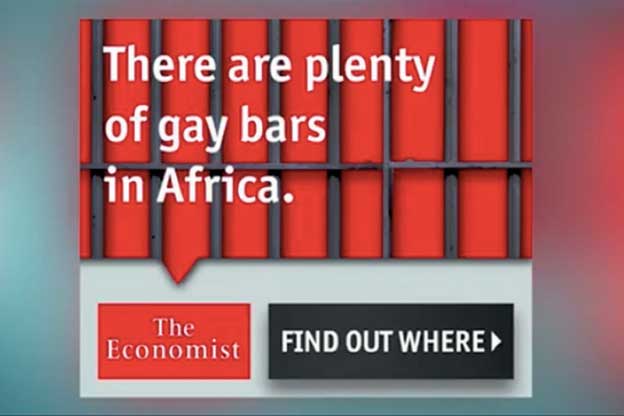 We repeated this for hundreds of our articles based both on the news of the day and social issues that The Economist advocates for, including gay marriage, migrant rights, gene editing, meritocracy, drug legalisation and more.

We also extended the central thought (surfacing content) by distributing our content for free during the most recent UK general election so that readers could make an informed decision with their vote.

From the page to the pavement

For example, we’d published an article on "Why eating insects makes sense", where we argued that an expected global population of 11 billion in 2100 could be fed high-protein insects as a sustainable alternative to meat.

What did we do? We sent out tricycles to large metropolitan hubs across London to hand out insect ice-cream, such as the Choc Hopper that was laced with grasshopper pieces. The youthful crowd who engaged with us were then directed to the associated editorial and offered a "12 weeks for £12" introductory subscription. In just two weeks, the UK campaign amassed 467 new subscribers. 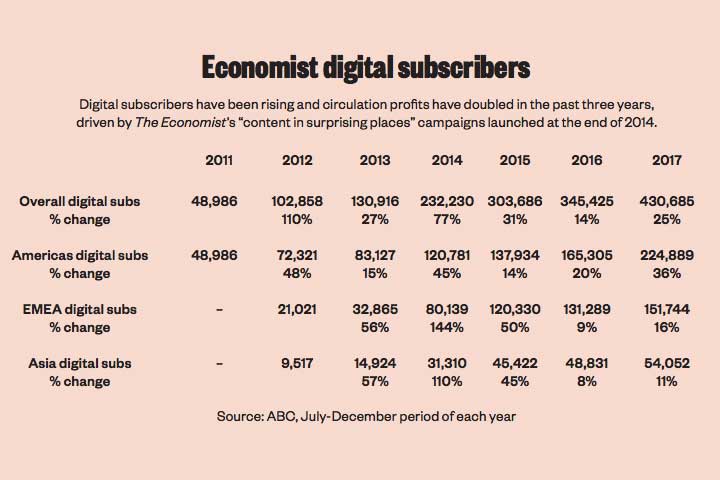 In another experiential campaign, people were issued with free cups of coffee and taught how one tonne of waste coffee grounds could produce 200 litres of biodiesel – enough to fill the average car engine four times over.

We’re now treating marketing as a service, refocusing the strategy to ensure the way we present the content offers utility to the reader

The experience was linked to editorial about more eco-friendly energy resources and increased visibility for The Economist on social media with the hashtag #feedingthefuture.

An Open Future Whether digital or real world, all of our marketing activity aims to communicate that we are a brand whose values lie at the heart of classical British liberalism. These values are under threat now more than ever, which is why we recently launched the Open Future initiative. It aims to remake the case for classical British liberalism at a time when it is being challenged from all sides by political populism and authoritarianism.

In addition to surfacing existing and specially commissioned content from our editorial staff to spark the Open Future global conversation, we are running videos, social, debates and competitions to bring it to life. Our digital and real-life marketing is giving our audience the chance to join the conversation.

Getting content in front of people and in the right context is a no-brainer. Now that we have gained those millions of new readers, we’re treating marketing as a service, refocusing the strategy to ensure the way we present the content offers utility to the reader. Moving forward, we’ll integrate the out-of-home experience using advanced technology and mobile phones.

Because a phone knows where you are in the world, we can deliver useful, location-specific content. You’ve just flown from London Gatwick to Nice, and we know it’s the Cannes Film Festival. Perhaps we pose a provoking question such as: "Are you ready for the money shot?" That takes you to just-published editorial on new legislation that tackles the gender pay gap in the entertainment industry.

With access to a current and archived wealth of quality content, we can be full of surprises. Next time you see raised eyebrows on the morning commute, you can check for coffee foam on your top lip – or just relax, The Economist is probably to blame.

Mark Cripps is the chief marketing officer at The Economist

How The Economist's experience marketing brought its content to life