The Black Farmer is challenging the underrepresentation of black people in the food industry in a campaign for Black History Month.

Debuting tomorrow (1 October), an ad celebrates the achievements of black people throughout history. It was written by Neil A Dawson & Company and narrated by The Black Farmer founder Wilfred Emmanuel-Jones.

The food brand has also launched a special range of sausages with Caribbean flavours, jerk pork and jerk chicken, and a pack design that celebrates black contributions to British society.

Marks & Spencer, Tesco, Sainsbury’s, Asda, Morrisons, Co-op, Aldi, Lidl, Waitrose & Partners, Budgens and Ocado are supporting the campaign by donating in-store promotional space and a share of profits from the sausages to benefit the Black Cultural Archives and The Mary Seacole Trust. 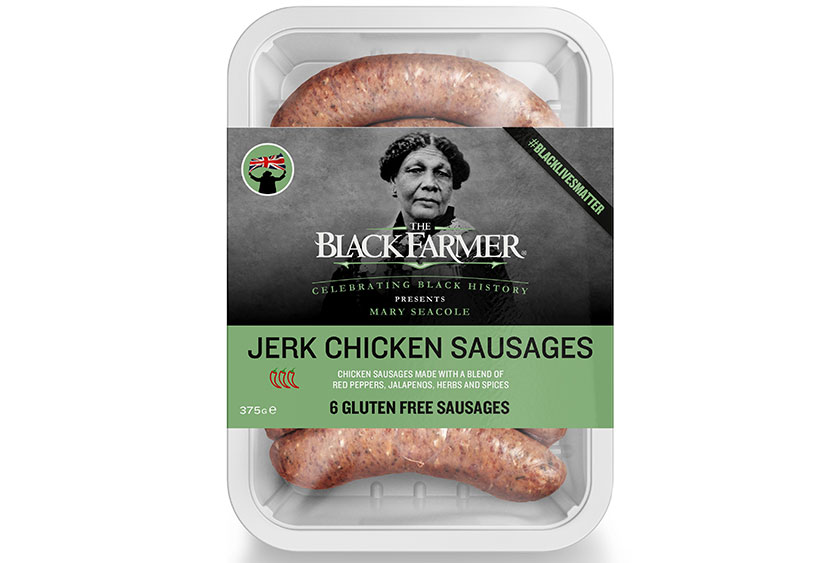 The Black Farmer has also set up a GoFundMe campaign to raise funds for the organisations.

'An agency would not have come up with that ad'

Emmanuel-Jones said he persuaded the supermarkets to back his campaign because black people have long been underrepresented and underserved by the food industry.

“The food industry is only accommodating white, mainstream Britain. Supermarkets have ethnic aisles for the sake of it but they’re not really doing anything,” he said. “We need products that represent all customers and more suppliers from black and ethnic minority backgrounds.”

The food industry is also guilty of perpetuating negative stereotypes of black people, with brands such as Uncle Ben’s rice and US pancake syrup Aunt Jemima only recently retiring their long-criticised mascots.

The resurgence of the Black Lives Matter movement earlier this year has brought such issues into the spotlight and prompted a re-examination of inequities across industries. Emmanuel-Jones said he hopes his initiative is just the start of widespread change across supermarkets as well as advertising.

“My ad is pretty assertive and in your face. It’s not like how people make ads conventionally,” he said. “An agency would not have come up with that ad. Everyone works with the stereotype of what blackness is. I’m always having to challenge those people who are coming up with creative to see black in a totally different light than the stereotype.”

Later this year, The Black Farmer will also launch a fundraising drive and a campaign aiming to redefine Black Friday and celebrate diversity in business.

“Every company should use Black History to celebrate black success, creativity and innovation,” he added.

Emmanuel-Jones said he is Britain’s only black farmer and was awarded an MBE for services to farming in the 2020 Queen’s Honours List. He was born in Jamaica and arrived in Britain at age four as part of the Windrush generation.

Watch: The Black Farmer's new ad to be shown after the Queen's Speech