All were present (in some form) at Campaign Underground's The Economics of Emotion event where the HERDmeister Mark Earls led 250 people dancing to Viva Las Vegas, delegates tried dead-insect snacks and top speakers from John Lewis, The AA, The Empathy Business and VICE explored the value of mood-based ads...

But that was the fringe. The main event was The Economics of Emotion, an exploration of the power of emotion-driven advertising and media targeting. Together with event sponsor Total Media, the behavioural planning agency, Campaign explored the role of emotions. Here’s what we learned…1. Cheryl Calverley, head of marketing, The AA
Who says irrational isn’t board-proof? 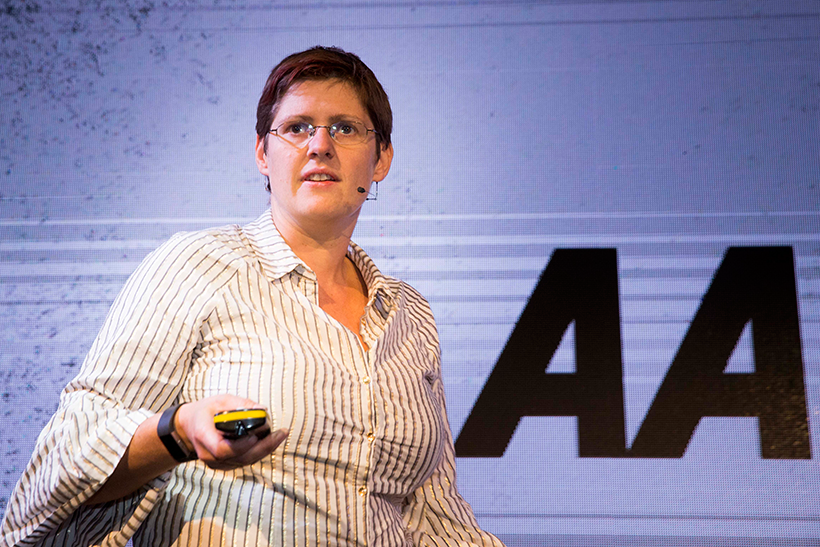 The AA provides breakdown cover, insurance and even loans – but people don’t really care about that according to its marketing chief. "We thought we were selling expertise and rescue patrols. And we thought we were selling it to damsels in distress." said Cheryl Calverley, the AA. In fact, she added, she thought they were wrong.Calverley launched a research piece to support her instincts and convince the board to change their approach: "I said that I need to get to the heart and soul of what people think and feel. Who sells things which are more about words and feelings and less about things? Who sells hope, dreams and promises? I think we sell hope."The research showed that if you are fearful and anxious you’re less likely to be a member of the AA, whereas if you’re confident, you are more likely to be a member. This gave Calverly the business case to change their approach. Out went the ‘damsels in distress’ and in came a value-based strategy. Calverley said: " "‘The AA shares my values’ is a stronger predictor [of brand engagement] than if you’re already a member. It’s the most important shift. You start to see an emotional story. We need to sell them something that they care about in a way that talks to their emotions."The AA’s latest ad – which features a baby singing and smiling while her father drives, breaks down and gets back on the road – sells the feeling of ‘never missing a beat’. "Within four weeks, we saw a huge shift in intent to purchase. The ad has nothing to do with the rational message of our brand – and we’ve shifted metrics already." 2. Tom Laranjo and William Hanmer-Lloyd, Total Media
If you do anything, surprise people 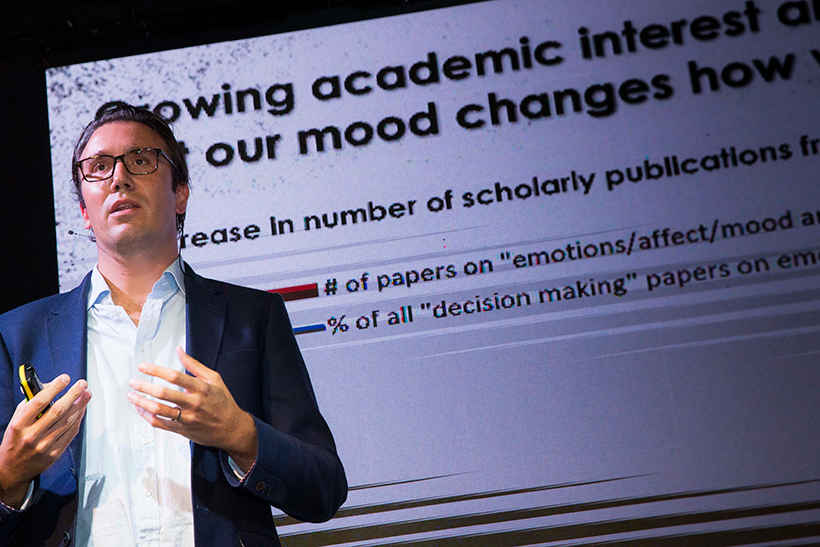 "There’s been an explosion in interest – there’s [evidence that] proves emotions have a huge impact in the way we make decisions," said Total Media managing director Tom Laranjo on advertisers targeting existing moods.

What emotions are most profitable? It depends according to William Hanmer-Lloyd, behavioural planning director at Total Media.

"There’s a benefit to targeting emotions to different people. Our recall is better when the tone of the content matches our emotion. People induced into sadness could remember far more details."

Total Media have found that sadness is particularly interesting when it comes to financial decisions: "when we’re sad we’re more likely to think about the short-term reward than the long-term reward. People focus on the immediate benefits – even if it’s at the detriment of the long-term package".

But if they only pick one emotion to focus on, it wouldn’t be sadness – or happiness. Laranjo said: "If you’re going to elicit one emotion from your campaign… I’d say surprise.

"Surprise releases noradrenalin in the brain which is responsible for concentration and focus, and it also releases dopamine, which stimulates desire and pleasure. Concentration and desire – what two other reactions could a brand want from an audience viewing its ad?"

There are two ways to gauge emotion according to Sensum’s co-founder and CEO Gawain Morrison: "As well as communication, autonomics can be used to measure emotion from the body, including physiological changes. We can sense and process emotional data by tracking internal sensations from the body."

Sensum have worked with brands such as Red Bull and Jaguar to explore what high-adrenaline activities do to the body. They created a VR experience with Red Bull to digitally reproduce the emotions felt when biking. 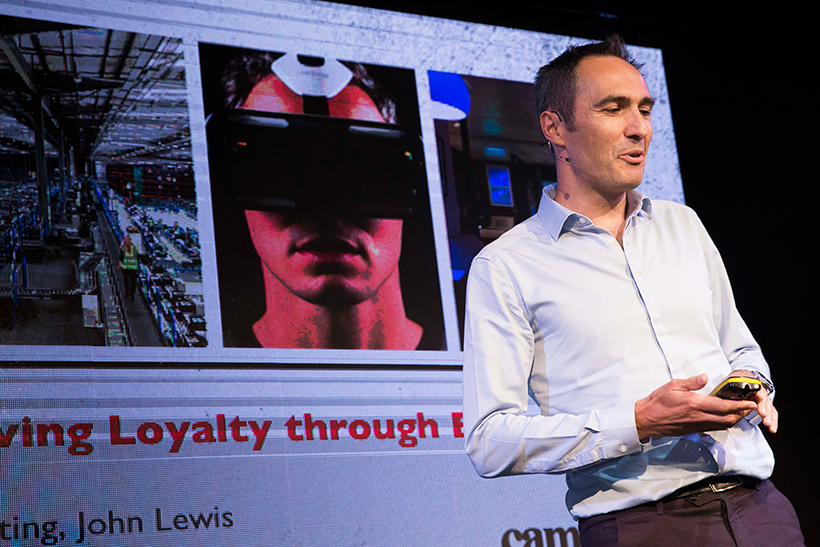 When they saw John Lewis talking about emotion, Undergrounders expected to hear about the heart-tugging Christmas TV ads.

This was all part of the strategy to shed its image of a department store only for special moments and be a place "to shop on a normal Saturday afternoon" said Chris Bates,  John Lewis' head of CRM and digital. "We wanted something that would build out from the love and trust – and give an identity to the brand."

John Lewis teamed up with experiential and content agency PrettyGreen to lift members’ moods with immersive live events. PrettyGreen helped John Lewis tell people what they’re about in an authentic – and entertaining – way.

"Three years ago we created the ON Blackheath event which communicated to a new, young audience that John Lewis is for them. It has quality food experiences, entertainment and lots of little surprise and delight factors to build up the experience more."

The strategy based on building love and trust has paid off, Bates explained: "Our primary objective was driving customer visibility – which has shot up. It’s looking at low-cost-to-do things for high-perceived value. Tea and cake are low cost but have high emotional value."

5. Jane Bloomfield, Kantar Millward Brown
People remember how you make them feel, not what you say

The world of content is cluttered and competitive – which advertisers can’t ignore. According to Jane Bloomfield, head of marketing at Kantar Millward Brown, it’s more important than ever to "leave a lasting impression".

"Marketers often opt for ‘in the moment’ strategies but research shows that’s when we’re least receptive to advertising and most distrustful of claims."

Bloomfield cited Amazon’s 2016 ‘Imam and Priest’ ad as one that focusses on an emotional, irrational story that leaves behind feelings rather than a rational sales-driven message. "The ad engaged people emotionally. There are very few brand cues but you instantly know who it’s for."

6. Mikhel Jaatma, CEO and founder, Realeyes and Thomas Webster, strategic innovation lead, Virtue Worldwide/ VICE Media
Emotions are a universal language – use it, track it and develop it

Emotions often run high and that’s why Realeyes CEO and founder Mikhel Jaatma has built an "emotion machine" to test engagement and help brands and publishers evolve their content.

"Content that produces a high emotional response in audiences has also been found to directly impact on sales outcomes and general effectiveness of activity," said Jaatma.

The ability to track the emotional effectiveness of its content is key for agency Virtue’s strategic innovation lead Thomas Webster.

He said: "We want to know what’s working, and how to optimise the total effect. We’re a content business and we’re less focussed on media reach and we’re more interested on the emotional outcome of the story we’re telling.

7. Belinda Parmar, author and activist, The Empathy Business
Tuning into emotion isn’t just for ads, it’s in everything we do… 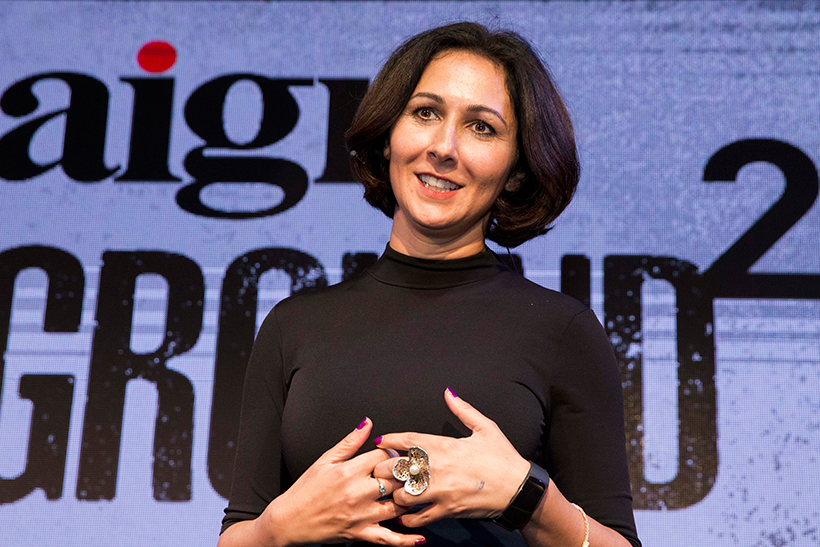 Advertisers should understand, share and talk to the emotions of others – but so should everyone. According to Belinda Parmar, everyone should be more empathetic – and businesses have more responsibility than most.

And one of the biggest threats might surprise you.

"Technology, for all its promises, is actually fuelling the empathy deficit. There’s a real opportunity for businesses to step up and create an empathetic world. And the most empathetic companies in the world outperform the least – they make more money and deliver more shareholder value."

"I’ve never seen so many sweets in my adult life"

"I’ve just been in solitary confinement for half an hour. I feel weird"

"I really like the space here. It’s better than the usual ‘bollocks’" 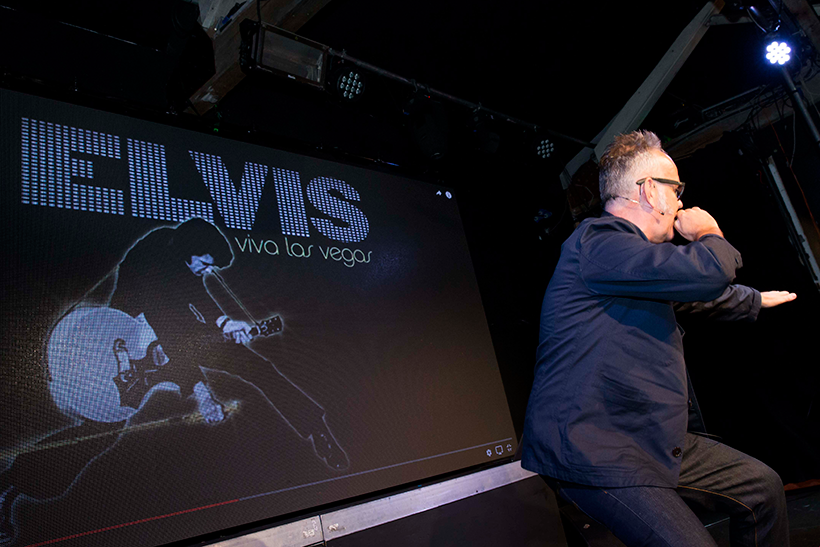