Thirty years ago, Britain was divided along class lines - yet the seeds of today's modern mass market were being sown. The emergence of Modal Britain, the new mainstream, has totally reshaped the British class system - so why haven't advertisers caught up? Tony Regan from Trinity Mirror Solutions explores.

But it’s also a chance to look all the way back to 1985 and see – beyond the recent history of the digital revolution – the origins of broad social changes that our industry is inclined to overlook.

Britain in 1985 was in the midst of an earlier revolution – a dysfunctional, pessimistic and declining industrial Britain being replaced by a modern, deregulated and market-driven economy. It was a painful transition that left its scars on many communities that had depended on industrial employment in mining and manufacturing.

March 1985 saw the end of the miners’ strike – the country’s longest-running industrial dispute – the failure of which paved the way for accelerated changes to the shape of the British economy and society. And now that time of strikes and class warfare seems like distant history, the 80s can be seen as the time when the foundations of today’s Britain were laid.

'In the middle of society, there’s a new mainstream, a modern mass market'

The new mainstream Trinity Mirror Solutions has a unique perspective on the emerging reality of Britain today, with more than 2,000 journalists the length and breadth of the country, gathering and reporting news, campaigning on issues locally, regionally and nationally across print, online, tablets and mobile.

Over the past few months, we have been busy with an extensive programme of original research to understand more deeply the modern mass market: what we call "Modal Britain" – the people there are "most of" in society; the middle 50 per cent as defined by household income.

What we’ve uncovered is that Britain in 2015 has a modern mass market that’s located in the middle of society, not at the bottom. Sadly, there is huge and accelerating inequality between an ever-wealthier elite and the disadvantaged poor.

But in the middle of society, there’s a new mainstream, a modern mass market, whose values, lifestyles and attitudes are shared between families that would have lived in different worlds and different classes just a generation ago.

The social mobility that allowed this modern mass market to emerge was very much accelerated by the 80s policy of "right to buy" – stimulating unprecedented levels of home ownership and new aspirations for people whose lives had previously seemed pre-determined by their class identity.

People began to see that their future was in their own hands, and pursued their own aspirations and goals more as individuals and less as union-members or voters for whichever party.

The traditional class boundaries that still lingered in the fading industrial era of the 80s have now blurred or simply faded away as a result. And yet the C1/C2 divide, representing separate worlds of white collar and blue collar, continues to hold sway in marketing and media – separating desirable C1s from undesirable C2s.

Our research shows that a modern mass market has formed in accelerated fashion in the past five to ten years, driven by powerful forces:

- Recession This has been the first "white-collar recession", so that now it’s not unusual to see premium cars parked outside Aldi and Lidl.

- The graduate majority Expansion of universities since the early 90s has populated the working population with an empowered and educated mass market enjoying a sense of entitlement unknown to their parents and grandparents.

- Regional regeneration Cities and towns transformed from their industrial pasts are enjoying a resurgence as hubs of retail, leisure and employment in the service economy and knowledge-based industries. As a result, the mainstream of British society is a blend of people who would previously have been on opposite sides of the class divide, but who now form what Future Foundation calls the "homogenised middle", with shared values that transcend the old class boundaries. 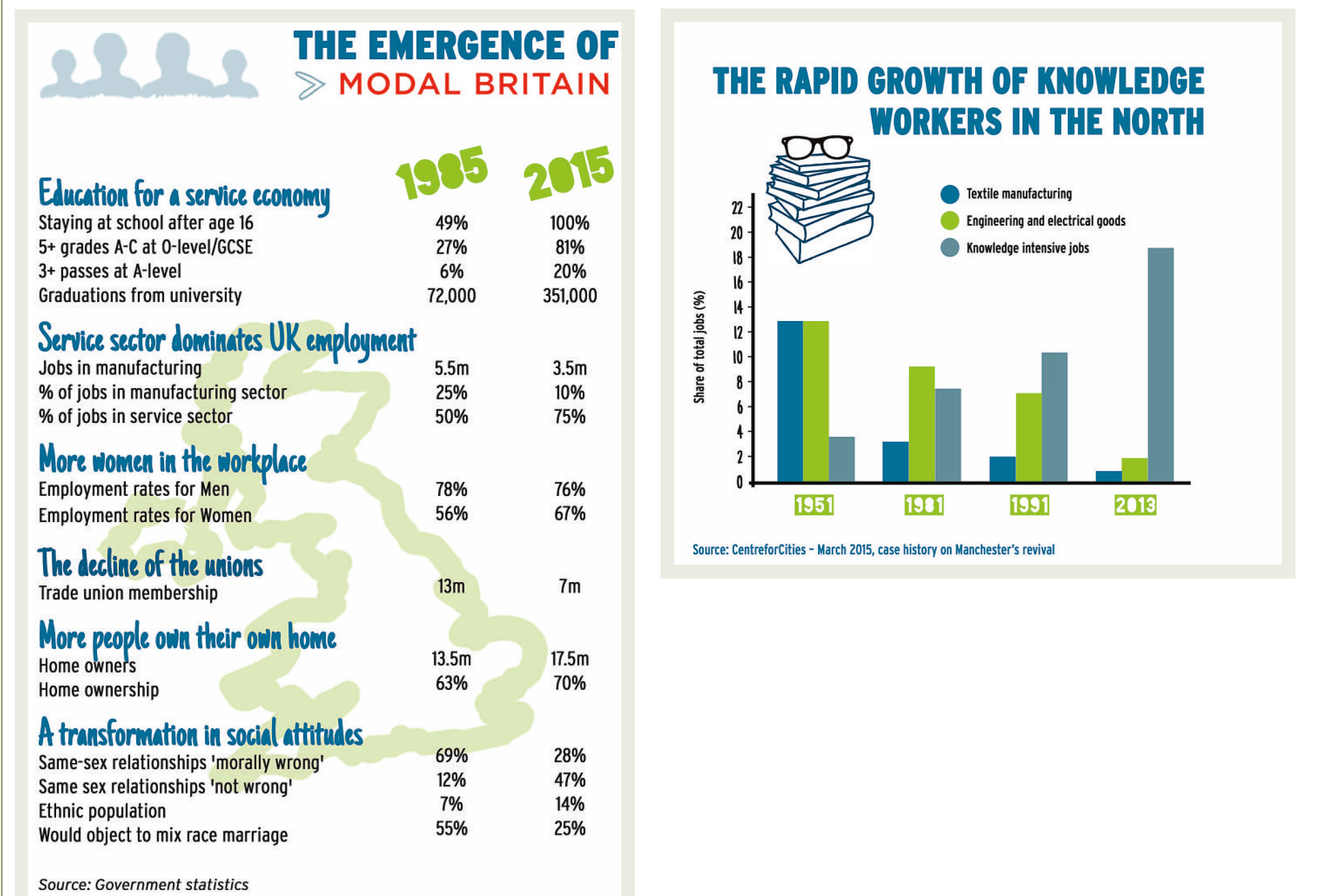 Beliefs, betterment and belonging They are the people who make Britain tick and keep it ticking over. They work in call centres, drive the trains, teach our children and are the beating heart of the NHS.

But they’re joyaholics, not workaholics – with balanced lives, not all-work-and-no-play, enjoying Saturday-night pizza with the kids, or nights out with the lads, laughing at the same old jokes and holidays with the extended family. They are happy participants in tight networks, turning to each other for advice, inspiration and support.

Modal Britons may not be fiercely ambitious and career-driven in the same way we are, but they have a much broader set of interests. Their goals and hopes can be thought of as achievable aspirations, and they are actively looking for opportunities to improve their lives in many small bite-sized chunks.

'We define the values of Modal Britain as ‘Beliefs, Betterment and Belonging’, and
the many iconic titles we represent cater for the vibrant lifestyles of our Modal Britain audience'

Our research highlighted the importance of inherited values and a strong social conscience that continue to guide Modal Britons’ everyday thinking. They are active participants in their local com­munities, be that washing the five-a-side team’s kit or taking time to chat to an elderly regular in their local.

We define the values of Modal Britain as "Beliefs, Betterment and Belonging", and the many iconic titles we represent cater for the vibrant lifestyles of our Modal Britain audience, understanding that they no longer define themselves by the class they may have been born into.

Our network of news brands across the country helps us to challenge a London-centric view that pays insufficient attention to the 80 per cent of the country that lives outside the M25.

Modal Britain is the new normal: the majority, the modern mass market. It didn’t exist in the class-bound Britain of the 80s, but now it wields enormous influence over the success or failure of brands.