A study that measured viewers' emotions by tracking their facial expressions has found that Coca-Cola's Channel 4 Gogglebox families ad was the most engaging.

The ad, which featured the families reacting to Coke's "Holidays are coming" ad, beat 54 other ads and scored better than 96% of the thousands of ads ever tested by Realeyes and Lucid.

It scored better than 96% of the thousands of ads ever tested and narrowly beat Vodafone’s six-part Christmas love story, featuring actor Martin Freeman, and McDonald’s ad about a little girl saving her carrot sticks for the reindeer.

The study involved Realeyes measuring the emotional reactions of 3,300 people, drawn from Lucid’s audience platform. It then used AI algorithms to track and interpret the subject's facial expressions as they watched via their webcams. The technology was originally developed at Oxford University.

Last year's winner John Lewis only placed at number 17 this year with Moz the Monster, its second-lowest performing Christmas ad of the last seven years," Naturally, it’s difficult for John Lewis to keep hitting such high standards with the same formula so they could consider changing tack next year," Mihkel Jäätma, Realeyes’ chief executive, noted.

Romance played a big role this year as a key theme in four of the ten most engaging ads. H Samuel, Heathrow and Pandora joined Vodafone in trying to capture people’s hearts. 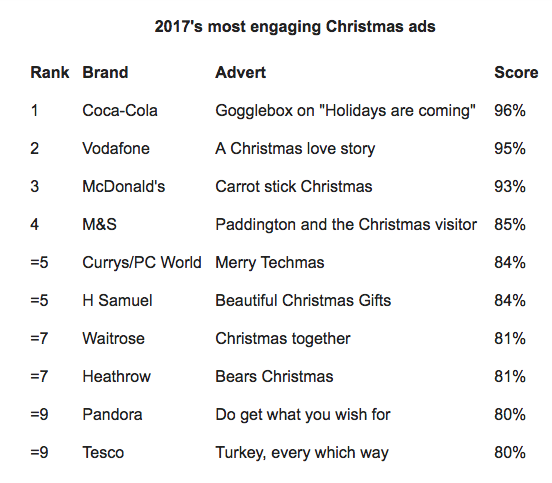 In contrast, many lower-performing ads involved a prolonged focus on showing a product. This suggests that a "shopping window" approach is far less effective at connecting with people at Christmas than a storytelling one, Jäätma said.

"Whilst the hype around Christmas ads has now become a national pastime, it’s sometimes forgotten that their job is to help sell more products and people’s emotional response plays a big part in where they decide to shop," he added. "This year saw advertisers trying to be more authentic by using real-life situations, humour and romance to relate to people, which could be seen as a way to cheer them up via universal themes after what’s been another divisive and turbulent year."

Mulberry’s "Win Christmas" from 2014 remains the most engaging Christmas ad ever, scoring 99.5%.

The great Christmas ad review of 2017

Pick of the week: Heathrow's bears are a Christmas treat

Turkey of the week: TouchNote's Christmas ad manages to both confuse and annoy

The great Christmas ad review of 2017