Facebook has dropped its appeal and has agreed to pay a £500,000 fine issued by UK regulators investigating the misuse of personal data in political campaigns.

The announcement this morning (Wednesday) comes a day after MPs voted to run a general election on 12 December. Facebook, the world's biggest social media platform, has become a key tool in election campaigning due to its reach as a highly popular platform and a tool of "microtargeting" for political ads.

The UK Information Commissioner's Office fined Facebook on 24 October 2018 for "serious breaches of data protection law" following the Cambridge Analytica privacy scandal, with £500,000 the maximum fine the ICO is able to levy.

The ICO ruled that Facebook failed to keep the personal information of users secure because it did not undertake suitable checks on apps and developers using its platform. The security failures meant that developer Aleksandr Kogan and his company GSR were able to harvest data of up to 87 million Facebook users without their knowledge.

This data was then shared with Cambridge Analytica’s parent SCL Group. The company was heavily involved in political campaigning for Donald Trump in the US presidential election and, as then chief executive Alexander Nix wrote in Campaign, had teamed up with Leave.EU and helped to "supercharge" the Brexit campaign in the 2016 referendum.

As part of today's agreement, Facebook and the ICO have agreed to withdraw their respective appeals. Despite agreeing to pay the fine, Facebook has made no admission of liability and each side will pay their own legal costs.

The agreement also enables Facebook to retain documents disclosed by the ICO during the appeal for other purposes, including furthering its own investigation into issues around Cambridge Analytica. Parts of this investigation had previously been put on hold at the ICO's direction and can now resume.

James Dipple-Johnstone, deputy information commissioner, said: "The ICO’s main concern was that UK citizen data was exposed to a serious risk of harm. Protection of personal information and personal privacy is of fundamental importance, not only for the rights of individuals but also, as we now know, for the preservation of a strong democracy.

"We are pleased to hear that Facebook has taken, and will continue to take, significant steps to comply with the fundamental principles of data protection. With this strong commitment to protecting people’s personal information and privacy, we expect that Facebook will be able to move forward and learn from the events of this case."

Facebook's controversial policy of not fact-checking political ads is being put to the test by political activists and has provoked dismay among some of the company's employees. A California protestor has registered as a candidate for governor for the sole purpose of running ads containing disinformation. Earlier this month, presidential candidate Elizabeth Warren deliberately ran a false ad about Facebook boss Mark Zuckerberg, claiming that he is endorsing Trump in next year's election. 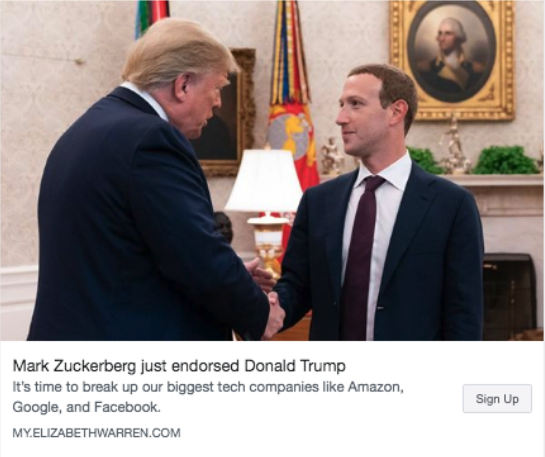 Harry Kinmonth, director and associate general counsel at Facebook, added: "We are pleased to have reached a settlement with the ICO. As we have said before, we wish we had done more to investigate claims about Cambridge Analytica in 2015. We made major changes to our platform back then, significantly restricting the information which app developers could access.

"Protecting people’s information and privacy is a top priority for Facebook and we are continuing to build new controls to help people protect and manage their information. The ICO has stated that it has not discovered evidence that the data of Facebook users in the EU was transferred to Cambridge Analytica by Dr Kogan. However, we look forward to continuing to co-operate with the ICO’s wider and ongoing investigation into the use of data analytics for political purposes."

​The politics of optimism

Less than quarter of online ads being measured for brand uplift

Inside ad fraud: what it takes to dismantle a $5.8bn enterprise

MediaMonks expands with $150m acquisition of US digital agency Firewood