After years of buccaneering expansion, the red-hot growth of Facebook now seems to be slowing.

The company failed to report sales growth higher than 30% for the first time in a financial year, even as expenses went up 51% in the last quarter of the fiscal year. Gnawing concerns over Facebook’s attitude to user privacy won’t be helped by a $550m fine it paid to settle a privacy case in the US state of Illinois. 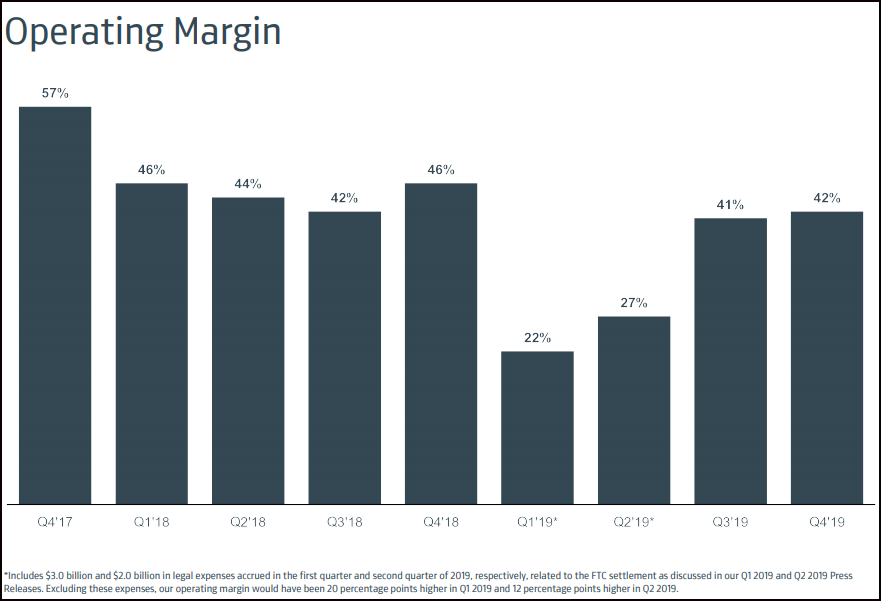 Besides revenue from its core social media business, founder and chief executive Mark Zuckerberg made a strong push for the company's fledgling commerce and payments offerings during the results announcement.

Even as Facebook faces continuing pressure from regulators and users, Zuckerberg says the company is doing more and better on dealing with this issue.

"We're very focused on election integrity – and this is an area where I'm proud of the progress we've made preventing foreign interference," he told analysts on a post-results call. "We were behind in 2016… we think our systems are now more advanced than any other company and we're often alerting law enforcement and intelligence about threats we identify." Debra Aho Williamson, principal analyst with eMarketer, expects Facebook’s Instagram division to drive advertising growth. "Advertisers are expected to increase spending on Facebook (including Instagram) by 22% this year," she said. "Separating Instagram out, we expect that property to increase its ad revenue by 54% this year, as advertisers continue to flock to Instagram for feed advertising, Story advertising and also the potential for ad placements in the Explore tab."

With growing privacy regulations (and regulators keen to enforce these stringent standards), Facebook expects strong headwinds for its advertising push, executives on the post-results call admitted. Three changes – regulations such as Europe's General Data Protection Regulation and the California Consumer Privacy Act, changes in mobile browsers and the company’s own privacy modifications – will all hit ad revenue going forward.

In the media space, Facebook seems to be sending out mixed signals about its plans. While on the one hand it splashed out for digital rights in sports such as cricket, other reports suggest the company is having a change of heart. Despite increasing the budget for its Facebook Watch video service, the business is focusing less on original content and more on licensed material.

While Zuckerberg was keen to push ahead with payments on WhatsApp in India (where the company ran a closed pilot on a million users), the company’s plans have been hobbled by regulatory pushback in the country.

But, with north of 400 million users for WhatsApp, it is hard for Facebook to ignore this opportunity. "We got approval to test this… back in 2018, and when so many of the people kept using it week after week, we knew it was going to be big when we get to launch," Zuckerberg said in a statement. "I expect this to start rolling out in a number of countries and for us to make a lot of progress here in the next six months."

Beyond WhatsApp, the company is also working on other efforts to expand its commerce initiatives, including Facebook Marketplace, Instagram Shopping, Facebook Pay and Libra, its contentious cryptocurrency push.

Even as it has fought to fight growing concerns over its handling of disinformation, from India to China to the US, Facebook reported that Asia drove ad revenue growth in the fourth quarter. On a regional basis, ad revenue growth was strongest in Asia-Pacific and rest of world, which grew 33% and 28% respectively, even as Europe and North America grew more slowly at a respective 24% and 22%.

Facebook's growing user base in Asia is expected to shore up anaemic growth in core markets such as North America, where it added just one million new users. In Asia-Pacific, it added 14 million.

Does Facebook's Libra currency have a future?

Twitter is taking a risk with political ads ban