Parent company Meta under pressure from Apple and TikTok.

Facebook’s record of unbroken quarter-on-quarter daily user growth has finally ended, with Q4 2021 bringing a decrease of a million people. 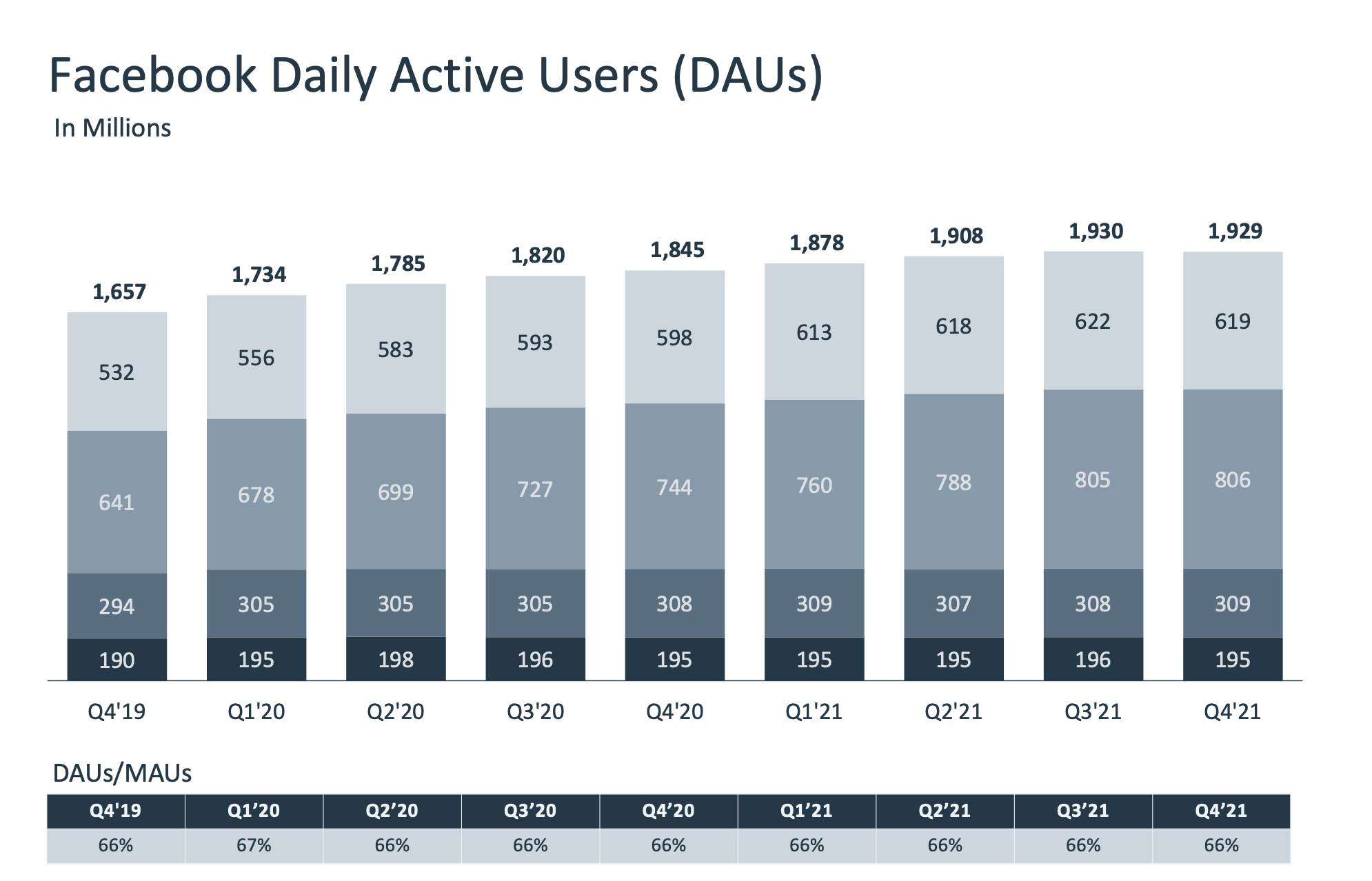 The percentage drop was minuscule, from 1.93 billion daily users in Q3 to 1.929 billion, but the reversal added to the problems currently confronting the social network’s parent company, Meta.

The news sparked a share price crash of 26.4%, with Meta losing $230bn in value, in the biggest one-day stock plummet ever.

Executives conceded that Facebook was losing out to the rising popularity of rival social network TikTok, particularly among younger audiences.

They also highlighted pressure on their ad-focused business model from Apple’s move to allow users to opt out of app tracking.

Chief financial officer Dave Wehner described this as a “pretty significant headwind” to the business in 2022 that could cost about $10bn.

Addressing the rise of short-form video, which is TikTok’s raison d’être, Meta founder Mark Zuckerberg conceded that it was becoming the “primary” way that people consume content online.

“Over the time that I've been running this company, 18 years this week, basically, we've gone from text being the primary way that people share and consume content online at the beginning of the early 2000s to... cameras on our phones and photos [becoming] the primary thing,” he said.

“And now that mobile networks are starting to get... gotten... really good, video is really becoming the primary thing, and it is a lot more natural and engaging. This is partially, by the way, why I think that an even more immersive format around virtual reality and augmented reality is going to be the kind of next step after video and why we're so invested there.”

Meta has addressed the pull of video with the introducing of Reels on Instagram and Facebook, and Zuckerberg said this produced notable engagement.

“But definitely, what we're seeing with short-form video is it's the next step from the kind of visual feeds that we have and the amount of engagement and content that people want to share and interact with and whether it's taking it and sending it to a friend in messaging or commenting online or just having fun watching it themselves... In general, we're seeing people spend a lot more time on this than what we've seen from apps so far.

“And that's also reflected in the success that other apps like TikTok have had. So there's a lot more to go here. We think we will have competitors across the industry. But as we've seen with some of these other formats, too, it will feel different, depending on the context in which it's implemented and the content from your friends.”