Facebook has placed ads in national newspapers today that explain how to spot fake news as part of continuing efforts to address concerns about its role in the spread of false information. 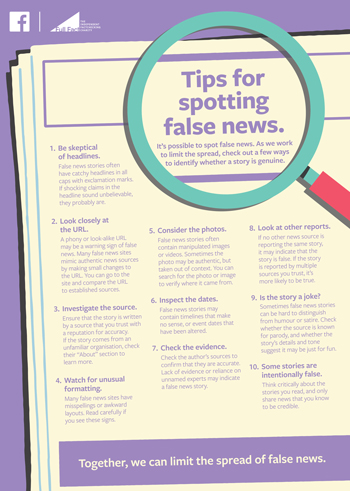 The press ad, created by the social media giant, gives ten tips on how to spot a bogus news item, such as "Watch for unusual formatting" and "Is the story a joke?"

It follows educational notices about spotting fake news that appeared on the top of Facebook users’ news feeds last month.

Facebook said it is also taking action against about 10,000 fake accounts it has identified in the UK, through a mixture of disabling the users or sending warning messages.

A spokeswoman said Facebook had made "improvements" to the way it recognises inauthenitic accounts by identifying patterns of activity, such as repeated posting of the same content.

Facebook has also introduced "informed sharing" into its internal measurement tools to help it rank where shared news stories go into the news feed.

"We’ve found that if reading an article makes people significantly less likely to share it, that may be a sign that a story has misled people in some way," the spokeswoman added.

In December, Facebook started to test "informed sharing", specifically for articles that are outliers, and is now bringing that test to the UK.

Facebook has been heavily criticised for not doing enough to prevent the spread of false information on its platform during last year’s US presidential campaign.

The fake news fiasco, as well as the company’s failures over video measurements, prompted Campaign to declare there had been "no winner" of its 2016 Medium of the Year award. Although Facebook was the dominant medium of last year, this magazine judged it did not merit the accolade.

Facebook is also entering into a "fact-checking partnership" with Google during the UK general election campaign. The two online giants are supporting Full Fact and First Draft to work with newsrooms to address rumours and misinformation spreading online ahead of the election on 8 June. Facebook said details of the project will be announced in due course.

Simon Milner, Facebook's director of policy for the UK, said: "People want to see accurate information on Facebook and so do we. That is why we are doing everything we can to tackle the problem of false news. We have developed new ways to identify and remove fake accounts that might be spreading false news so that we get to the root of the problem.

"To help people spot false news we are showing tips to everyone on Facebook on how to identify if something they see is false. We can't solve this problem alone so we are supporting third party fact checkers during the election in their work with news organisations, so they can independently assess facts and stories."

Facebook to focus on transparency, measurement and stories in mobile

Facebook will permit self-harm to be livestreamed, documents suggest

Turkey of the week: Facebook "Tips for spotting fake news"

Online ad fraud is a game of whack-a-mole