With a global advertising boycott against his platform gathering steam, Facebook founder and chief executive Mark Zuckerberg has pledged new steps to deal with misinformation and hateful content, particularly around issues related to the upcoming US elections.

Zuckerberg's intervention on Friday (26 June) was unable to prevent three more major global brands from joining an advertising boycott of the social media titan over the weekend: Diageo, Starbucks and Levi's.

In a statement yesterday (Sunday), Starbucks said it would payse advertising on all social platforms while it discussed internally with its media partners and civil-rights organistions over stopping the spread of hate speech.

Diageo, along with Coca-Cola last week, also said it would pause paid advertising on "major social media platforms", meaning even smaller players such as Twitter, Snapchat and TikTok are being affected.

In a Facebook post and town hall speech broadcast live (see below), Zuckerberg outlined steps to counter some forms of voter suppression, set a higher standard for hateful content in ads and promised more labelling around newsworthy posts, especially by politicians that may violate Facebook policies.

The video and blog post did not directly reference the rapidly growing advertising boycott of his platform over Facebook's inability to suppress hateful content. Last week major advertisers such as Unilever, and Verizon announced a pause of their advertising on Facebook and, in some cases, also Twitter and other social media. These pauses have varied from 30 days to "at least" the end of 2020, in Unilever's case. Facebook shares on Friday closed down more than 8% in response to the Unilever announcement.

In a rare move last week, Zuckerberg attended a client council meeting, flanked by chief operating officer Sheryl Sandberg and vice-president of global marketing solutions Carolyn Everson, to explain the company’s position over hate speech and political content moderation, seeking to assure ad companies including Omnicom and Dentsu Aegis Network. Separately, Facebook head of trust and safety policy admitted that the company has a "trust deficit" in a call with Canadian advertisers. 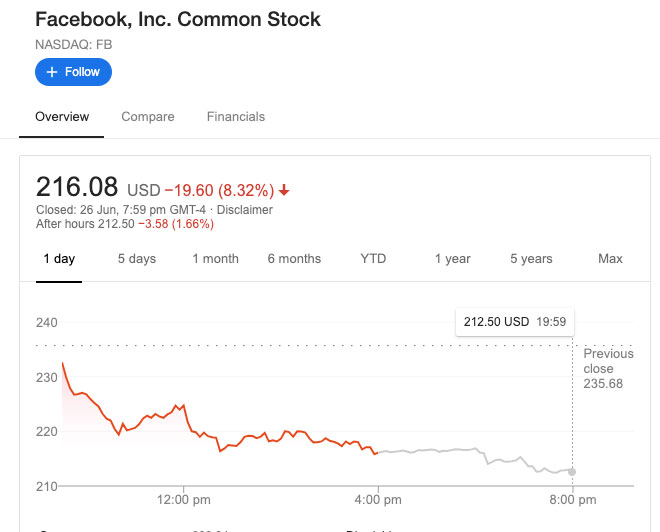 In his address, Zuckerberg tried to counter the trust issue, citing a study from the European Union showing Facebook "acts faster and removes a greater percent of hate speech on our services than other major internet platforms, including YouTube and Twitter". Zuckerberg noted that artificial-intelligence systems and human review teams now remove 90% of identified hate speech before anyone reports it to Facebook.

Zuckerberg said Facebook believes "there is a public interest in allowing a wider range of free expression in people's posts than in paid ads". As a result, Facebook says it will now ban a wider category of hateful content in advertising:

He said: "We're expanding our ads policy to prohibit claims that people from a specific race, ethnicity, national origin, religious affiliation, caste, sexual orientation, gender identity or immigration status are a threat to the physical safety, health or survival of others. We're also expanding our policies to better protect immigrants, migrants, refugees and asylum seekers from ads suggesting these groups are inferior or expressing contempt, dismissal or disgust directed at them."

While the focus on advertising shifts attention away from his controversial decision to allow an inflammatory post from US president Donald Trump and became the root of the most recent widespread backlash against Facebook, Zuckerberg also outlined a new process for dealing with "newsworthy" content that may be controversial.

Facebook says it will "soon" start labelling the content it leaves up that it deems "newsworthy", even though it may violate the platform's policies, "if the public interest value outweighs the risk of harm".

Zuckerberg explained: "We'll allow people to share this content to condemn it, just like we do with other problematic content, because this is an important part of how we discuss what's acceptable in our society – but we'll add a prompt to tell people that the content they're sharing may violate our policies.

"To clarify one point: there is no newsworthiness exemption to content that incites violence or suppresses voting. Even if a politician or government official says it, if we determine that content may lead to violence or deprive people of their right to vote, we will take that content down."

Other measures outlined by Zuckerberg related to the upcoming US election. These include attaching links to Facebook's US Voting Information Center for posts that discuss voting, including from politicians, banning posts that make certain false claims to discourage voting and a pledge to more quickly remove false claims about polling conditions in the 72 hours leading up to election day.

Zuckerberg noted that Facebook will continue to review its policies and adjust its approach as new risks emerge.

A version of this story first appeared on Campaign Asia-Pacific and has beed edited to include details of Diageo, Starbucks and Levi's joining the advertiser boycott

How much power do brands have to change Facebook's behaviour with boycotts?