Before the clowns take their final bow, a look back at the outsize influence of "The Greatest Show on Earth."

There will be many sad clowns and kids in May when Ringling Brothers and Barnum & Bailey Circus takes its final bow after 146 years. Thanks to declining ticket sales—a years-long problem exacerbated by the loss of its elephants last year—parent company Feld Entertainment has decided the show simply can’t go on any longer.

In many ways, the history of "The Greatest Show on Earth" parallels the history of advertising itself. Its founder, P.T. Barnum, coined terms like "there is no such thing as bad publicity" and "there’s a sucker born every minute," and wasn’t afraid to generate a little news—or just plain invent it—to sell tickets. The circus that bore his name was also at the forefront of guerilla marketing and PR before such terms existed, and in later years began experimenting with 3D video and geofencing.

"Ringling Bros. and Barnum & Bailey has always been at the forefront of advertising," said Vicki Silver, CMO of parent company Feld Entertainment, in an email. "Beginning in the days of P.T. Barnum when the circus would advertise with large posters or actual paintings on barns and other structures, the circus has been an advertising pioneer.Today we integrate a wide array of platforms—from traditional such as TV and outdoor to evolving mediums such as mobile and social so our audiences can see what a special experience awaits them when they come to see Ringling Bros. in person."

In the end, advertising couldn’t save the circus, but here’s a look at how clever (if sometimes shockingly immoral) marketing kept it alive for more than a century.

Known as the "Shakespeare of Advertising," Barnum embraced the fantastical, if not always the factual, when promoting his show. An act that launched his career is a blatant example of what we would now call fake news.

Before founding the circus that would make him famous, Barnum had his own show called "P.T. Barnum’s Traveling Museum, Menagerie, Caravan & Hippodrome," widely known at the time as a "freak show." In one of his more famous and outlandish moves, he paid $1,000 to buy Joice Heth, a female slave who was supposedly George Washington’s 161-year-old wet nurse. In this poster, dated 1835, Heth is described as "The greatest natural and natural curiosity in the world!"

Heth was a big draw at first. But once the novelty began to wear off, Barnum revived interest by writing an anonymous letter to a Boston newspaper claiming that the woman was not only a fake, but a robot. The letter worked. People debated whether the woman was alive, and ticket sales increased. Barnum even went so far as having a public autopsy once she died, selling more tickets to the event.

In 1884, Barnum was responsible for one of the first and most sensational examples of experiential marketing. The Brooklyn Bridge was set to open in May of 1883 after 13 years of construction, and Barnum saw an opportunity. He proposed to test whether the bridge was safe by leading his circus elephants across it.

He was initially turned down, but a year later, his wish was granted, and New Yorkers and the press marveled at the sight of 21 elephants and 17 camels crossing the Brooklyn Bridge on May 17, 1884. Jumbo, Barnum’s prized six-ton elephant that inspired the circus, brought up the rear. "To people who looked up from the river at the big arch of electric lights it seemed as if Noah’s ark were emptying itself over Long Island," according to a New York Times article. The New Yorker commemorated the scene in 2004 with cartoon elephants on its cover. 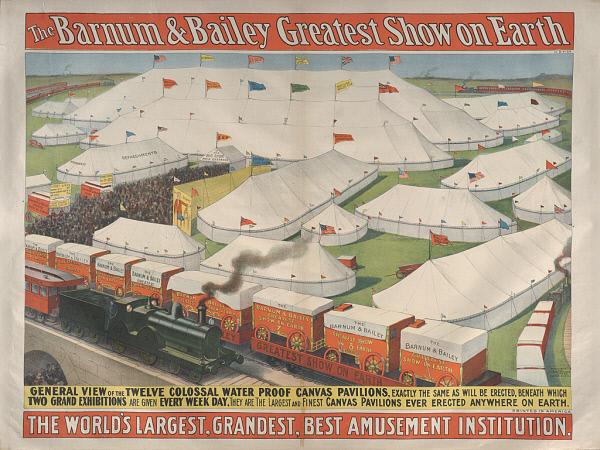 Decades before radio or TV commercials, the traveling circus would bombard each city it toured with posters, letting everyone know that the circus was coming to town. It was a task not easily achieved; each new location needed new ones at least a week before the circus came to town. Today, those posters are collectibles. 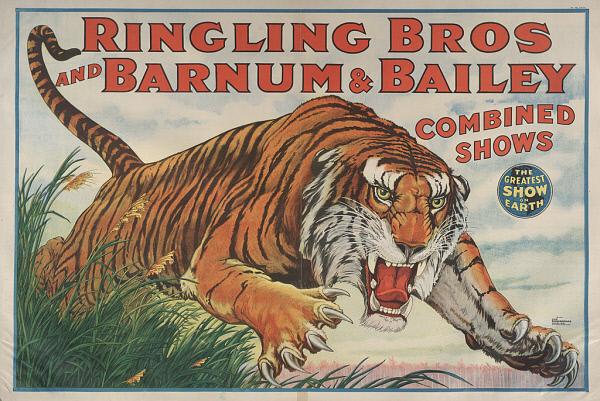 Neil C. Cockerline, a circus historian, describes this poster as, "Probably the greatest image ever produced as a circus poster design" in a newsletter for the Western Association for Art Conservation, "[T]his particular image may well be the most recognizable circus image in history, and it is still utilized today, often appearing in set and costume designs in current productions of the Ringling Bros. and Barnum & Bailey Circus."

The Ringling posters of the 1930s through 1950s focused on singular acts with bright colors and large lettering. 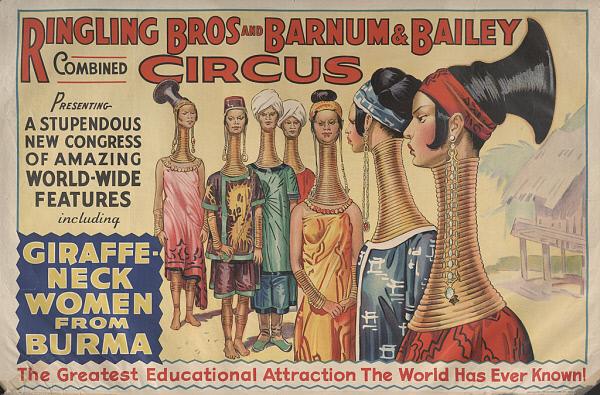 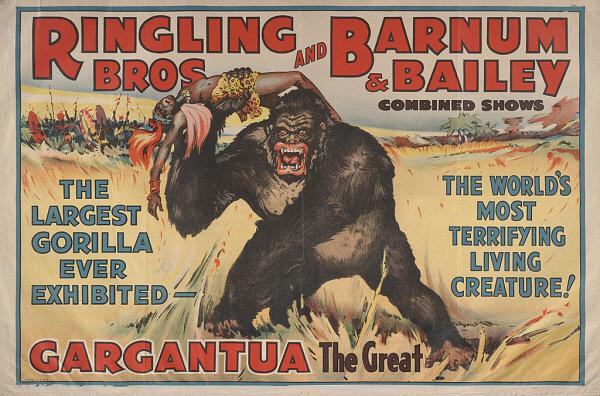 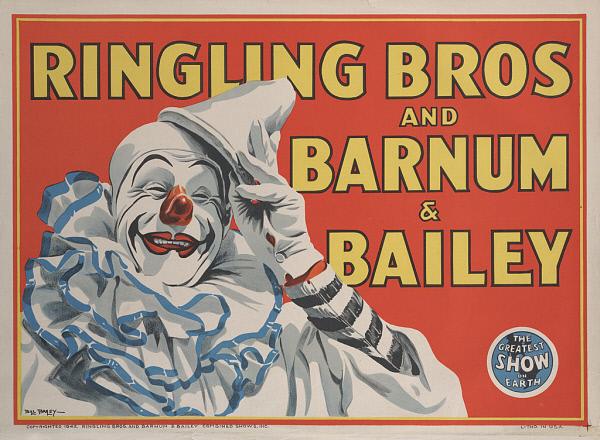 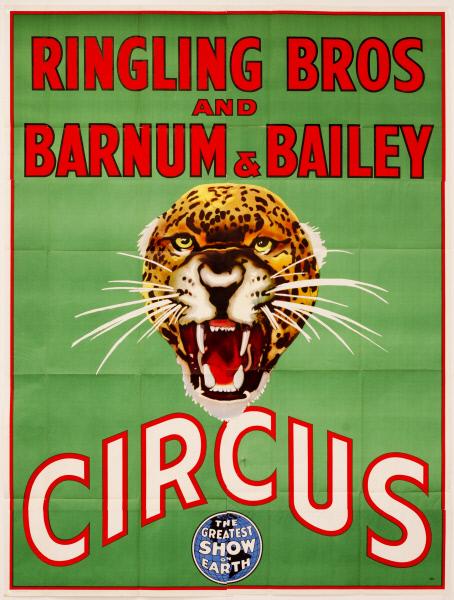 After a series of fires and declining ticket sales, by 1956, the circus moved from tents to arenas. Soon, the transition from print posters to television ads would also take place. This commercial from the 1970s is an example of an early TV spot for the circus: 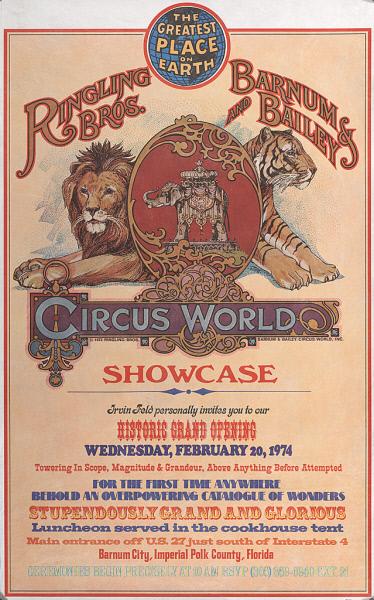 To expand its circus universe, Ringling Bros. and Barnum & Bailey Circus, bought by Feld Entertainment in 1967, created a theme park in Florida. When it opened in 1974, the park was complete with roller coasters, a Ferris Wheel, several live shows and one of the first IMAX theaters. This is an invitation with the Circus World logo.

At the time, the theme park proved a threat to Disney World. Learning of plans about Circus World, Walt Disney greenlit the popular rides "Pirates of the Caribbean," "Big Thunder Railway" and "Treasure Island" for his theme parks.

But Circus World didn’t last long. In the early 1980s, Ringling Brothers sold the theme park to Mattel. The park then passed through several owners before shutting down in 1986.

In the spirit of P.T. Barnum, the company began advertising that real unicorns were part of its shows in 1985. The circus named the beast Lancelot and trademarked the term "Living Unicorn." Of course, the claim was false, and these unicorns turned out to be goats that were cross-bred to produce a single horn. Ringling offered biologist Oberon Zell, the owner of the goats, a four-year licensing contract for four of the mystical creatures, according to Mental Floss. The mystery brought the crowds in, but also the animals rights groups.

The Humane Society and the American Society for the Prevention of Cruelty to Animals (ASPCA) were quick to disapprove of the goats’ condition, concerned that the animals underwent painful surgeries to have the horn inserted. The US Department of Agriculture sent vets to check the goats and found they were healthy and the single horn might be due to a tissue graft surgery that made the horn grow unnaturally.

Despite the report, Ringling still held onto the fantasy of the "living unicorn." Debbie Linde, a spokesman for the circus, told The Observer in April 1985 that, "As far as we’re concerned, it’s a unicorn. A unicorn is an animal with one horn." And, according to the paper, Ringling placed a full-page ad reading, "Don’t let the Grinches steal the fantasy! Come see for yourself: the living unicorn!"

1999: A change to an emotional appeal

By 1999, Kenneth Feld had taken over the production of the show from his father Irvin Feld and had been committed to making changes at the company, including hiring the first African American ringmaster. Feld told Fortune Magazine at the time that a few years before 1999, he had also brought in outside help—Stuart Snyder, a former Turner executive, to act as Chief Operating Officer, and Eric Stevens, a marketer from Dreamworks.

Stevens introduced a new advertising agency to redefine the company message. "Past advertising focused on the circus coming to town and here are the new acts," Stevens told Fortune. "Now we're selling the emotional experience: looking at the smile on your child's face and sharing something special."

This 1999 commercial focuses on the smiles and laughter of children and their families, a clear deviation away from past advertising methods.

In March 2015, after numerous complaints from animal rights groups and changes in city laws, Ringling Brothers and Barnum & Bailey Circus took its elephants out of "The Greatest Show on Earth." Without its elephants, Feld Entertainment predicted that the end might be near for the brand. The challenge then became how to market the show without its star elephants.

In July 2016, Ringling opened "Out of this World," an intergalactic-themed acrobatic show with a few animals thrown in. Feld Entertainment decided to make the rebirth of the show sparkle with new technology. When speaking to the press, a Feld Entertainment executive said technology would transform the show, including 3D video projection mapping, segways and trackable programming spotlights.

Ringling also developed its first app, giving audiences the opportunity to learn more about the performers and take "Circus Selfies" with clown noses. It also included  a geo-fencing photo gallery featuring all the pictures from a single show.

October 2016: The Circus Wants the Circus Back

During the 2016 presidential election, many pundits described the political landscape as a "circus."  That didn’t fare too well with the clowns and ringmaster. In October, nearly at the end of their rope (pun intended), Ringling Bros. and Barnum & Bailey took a jab at the comparison by launching a new campaign called, "The Circus Wants the Circus Back."

The 1:12 commercial points out all the ways that politics are not like the circus. The Ringmaster states, "People keep calling politicians clowns," and the circus clowns respond with, "but we’re real clowns and we take clowning seriously."

A new beginning, a little too late

The announcement of the circus’ closing came two days after the debut performance of the company’s first female Ringmaster, which Ringling promoted on its social channels.

How to be ageless in advertising

Even Clinton put Election Day on hold for the #MannequinChallenge