The horror of last Friday night will live on in the hearts and minds of us all.

But the weekend was additionally tragic for those who knew Pat Fallon, who died suddenly across the ocean from the indiscriminate violence in Paris.

Tributes from those who worked with him have flooded in, full of appreciation for the culture he created at Fallon and his persistent loyalty to its staff. Robert Senior, a co-founder of Fallon London and the global chief executive of its Saatchi & Saatchi sibling, said it would be the "twinkle in his eye" that he would miss the most.

Seventeen years have passed since the launch of Fallon London and Senior is the only one of the five co-founders still involved with the agency. But the fruits of Fallon’s mentorship can be seen across the industry. Michael Wall is the global chief executive of Mother after a stint at Lowe, Laurence Green is a co-founder of 101, which he launched with Richard Flintham, and Andy McLeod is a director at Rattling Stick.

The approach Fallon took in hiring the quintet in 1998 and then letting them get on with running the agency is credited with much of its early success. Fallon had wanted to invest in youth and each of the five were emerging talents, already star performers but not yet running their own agencies. They pitched as a family, which resonated with Fallon’s own approach, and bought into his two-pronged strategy of believing in both the work and doing the right thing.

Once Fallon established that he had the team to deliver on that vision, he relinquished control. Far from constantly having to report numbers back to the US, Senior says it was he who used to call Fallon. The only contact Fallon instigated was a rallying cry before pitches to fire up the troops. And it paid off. The shop created celebrated work such as Sony "balls" and Cadbury "gorilla", and was Campaign’s Agency of the Year in both 2006 and 2007.

Amazingly, Fallon was probably the last US shop to really prosper after launching in London. Anomaly, Crispin Porter & Bogusky, Droga5 and Mcgarrybowen have all struggled to gain a foothold in the market and The Martin Agency has yet to prove itself. Moreover, Creature London arguably only really came into its own after cutting the ties to its Seattle-based parent.

When Fallon McElligott Rice burst on to the ad world in 1981, it ran an audacious ad in the Minneapolis Tribune promising to be an agency for brands wanting to outsmart, rather than outspend, the competition. 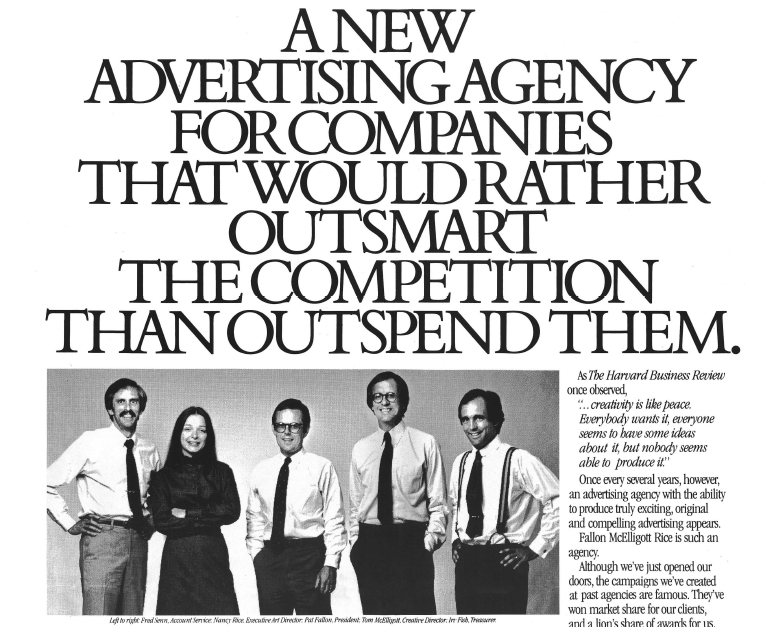 That confidence came from Fallon and Tom McElligott, the copywriter, having worked together for eight years. The importance of chemistry as well as confidence is a lesson that agencies looking to build should heed.

On partnership with Pat Fallon and death in advertising