The contrasting fortunes of the two brands embroiled in recent social-media controversies provide a textbook example for marketers.

In the past two weeks, we have had two tales of social media, two controversies and two different results that are perfect examples of what brands should and should not do when a storm brews online.

The first was about Femfresh, and unless you were sensibly enjoying a holiday sans digital device, you will have noticed how a brand came undone on Facebook in textbook style.

It was the story we summed up on our digital blog The Wall with the headline 'Femfresh suffers social-media vagina backlash' – and what a backlash it was.

Yes, we used the word 'vagina' as it was a story about how women do and do not talk about their genitalia that hit at the heart of Femfresh's branding. For the uninitiated, Femfresh is a brand designed for women to use 'down there' that uses a variety of 'fun words', such as 'lady garden', 'froo froo' and 'kitty', to describe the vagina.

It made natural sense to extend this branding to its Facebook page, where something was lost in translation. Some people took umbrage with Femfresh talking this way; they resented the use of childish euphemisms, and they did what people do on social media – started to talk.

Caught on the back foot

It started with a trickle, but it turned into a torrent as hundreds posted comments and the Church & Dwight-owned brand lost control.

It posted a holding comment, which boiled down to 'we're listening and considering a response', that cost Femfresh the ball game. People interpreted the indecision as weakness and several hundred more comments were made.

The story had gone viral and Femfresh and its agency had no response. They were rabbits in the headlights, roadkill waiting to happen. That made its misguided decision to pull its Facebook page almost inevitable. Result: defeat.

The second controversy came soon after Femfresh had fallen and it was a much bigger story in that it was global, involving the Kraft-owned cookie brand Oreo.

Unlike Femfresh, whose woes no one could have easily predicted, in this instance Oreo courted controversy from the off. The brand took a stand, in the most laudable of fashions, that it knew would excite fierce online debate, including waves of negative comments.

Most brands and their agencies will run a mile from controversy, particularly any involving politics. Marketing and politics are not natural bedfellows.

Oreo, however, took a decision that its products were for all, regardless of sexual orientation, and posted a picture on its Facebook page celebrating gay pride. Whoever saw that coming? 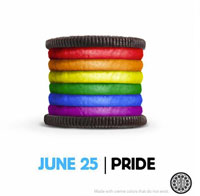 Many thousands descended on its page and stories appeared around the world. People commented from both sides. Those from the religious right, who saw Oreo's statement as offensive, and said they would never buy the brand again and were 'unliking' the page, and those supporting the brand.

Oreo's response was to let the conversation happen. It didn't post a statement of its own. It let the gay pride image do all of its talking and it won easily. It had more than 26m Facebook fans. It now has more than 27m.

Kraft had clearly thought about its response in advance, and it did not wobble.

If there is a T-shirt slogan to heed when social-media crisis hits, it is this 1939 classic: 'Keep calm and carry on.' That's what Femfresh should have done. While it had hundreds of negative comments, it also had more than 5000 'likes' and some positive comments.

That was enough to ride out the storm, if only it had come out right away with a positive statement that articulated that it heard what was being said, but that it had the confidence to stay the course.

Gordon MacMillan is social-media editor at the Brand Republic Group and editor of The Wall blog @thewalluk. Follow him on Twitter: @gordonmacmillan.

Why you need to find your brand's social-media voice

Kraft investors to vote on Cadbury name next year