'Tis the season of Christmas light unveilings, and what better way to celebrate, than by taking a look back at some of the most creative switch-on events of recent years?

A total of 2,000 people came together to perform the stunt, which saw individuals positioned under a 300 square-foot ceiling complete with mistletoe. Participants were then asked to execute 1,000 one-second kisses at the exactly the same time, at which point they lit up the lights. 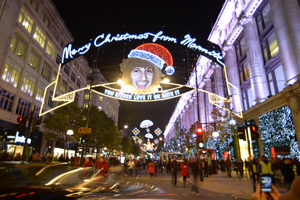 In the lead up to Christmas 2013, Marmite teamed up with production company Grand Visual and agency DDB to create a series of social-powered Christmas lights on Oxford Street.

Members of the public were invited to post their ‘love it or hate it’ expressions along with a selfie on the brand’s Facebook page, to see it appear on a digital banner next to Selfridges.

The shopping centre brand selected singer Mariah Carey to turn on the Christmas lights at its London property in 2009. The centre’s Southern Terrace was complete with pink carpet, and butterfly confetti was released into the air as Carey made her entrance.

The brand has selected artists including Rita Ora and Rihanna for similar events over the years.

Approximately 50,000 people are said to have attended the event, which was designed to coincide with the world premiere of 3D Disney film, A Christmas Carol at Leicester Square. Piggotts produced the display; meanwhile The ADI Group supplied screens, enabling attendees to view the lights from multiple angles and locations. 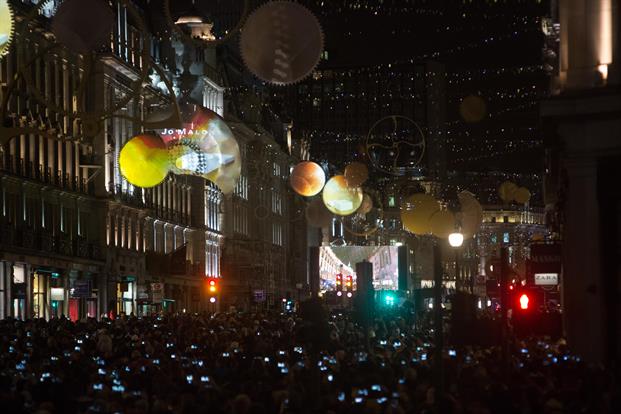 Coined Timeless Elegance, the lights feature video animations and projections that are in constant transformation. Branding by Jo Malone and Regent Street features on the circular objects that hang overhead, and some showcase the brand’s iconic white packaging.

More: The best Christmas brand experiences from the past five years