Despite its aims to remain largely free from commercial marketing, Worthy Farm will host a few big name brands at Glastonbury Festival this week (24-28 June).

A Somerset-based neighbour to the festival, dairy business Yeo Valley is now a perennial brand at Glastonbury. The company has set up its own dining installation featuring its 'Yeogurt' and ice cream varieties and an outdoor seating area in the D Market section of the festival.

Yeo Valley will also be handing out Glastonbury tote bags to revellers on the way to the festival. The bag was designed by Samantha Owen who won a competition to have her artwork put into print. 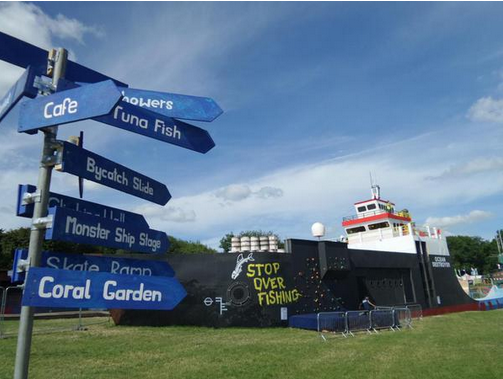 Another friend of the festival and its philosophies is global charity Greenpeace, which devised a 3D experience featuring David Attenborough at last year's festival. This year, the environmental brand is focusing on the plight of the world's oceans.

The activation features a trawler boat that guests can climb and dance on. The vessel will also host talks from fishermen whose businesses are at threat from 'monster' boats, and houses a music venue and bar known as The Engine Room.

Elsewhere, the charity has installed a skate park, a huge fish that festival-goers can walk through, a farmer's market, a café, hot showers and a skate ramp.

Channel 5's children's brand Milkshake will be hosting a live version of its TV show, dubbed Pop, Rock and Bob, at the Kidz Field in the festival. Presenters Jen Pringle and Derek Moran will be joined on stage by the likes of Bananas in Pyjamas, Little Princess and Bello from Jelly Jamm. 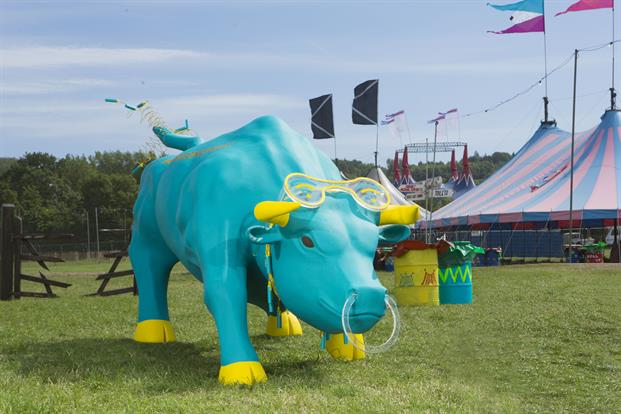 Telecoms brand EE has created an eye-catching 'Charging Bull' sculpture, which will act as a double-speed 4G wi-fi hotspot and charging station for festival-goers. The activation has been designed to draw attention to the telecoms brand's role as the official technology partner of Glastonbury 2015.

EE is also hosting two Power Exchanging Cabins at the festival, where guests can head once their phones have run out of juice. Meanwhile the bull has been designed to give attendees the chance to give their EE Power Bars – portable mobile phone chargers – a quick boost of energy.

The NHS will be encouraging guests to sign up to become blood donors at its activation. The immersive activity will form part of the NHSBT's role as Glastonbury's health campaign of the year.

The 'Be this year's headline act' activation will invite festival-goers to perform as a headliner on a specially-constructed 'Drop stage'. Afterwards, they will be able to share their experience on social media using the hashtag #headlineact.

Things to do this weekend: Vintage festivals, Corona parties and Dorset Cereal giveaways

Things to do this weekend: Brazilian beach pop-up, Festival of Love and more