Video has become a form of speech in its own right - and not just for teenagers, writes Nicola Kemp.

You can no longer ignore the YouTubers. Even President Obama has turned to the power of the YouTube generation, inviting top vloggers to the White House to interview him following his State of the Union address.

YouTubers are no longer a secret trend confined to the bedrooms of teenagers; they’re a reality of the media landscape

However, traditional media’s obsession with the teen starlets of the YouTube Generation doesn’t constitute a genuine understanding of this fast-maturing medium. It is a tension underlined by the uncomfortable juxtaposition of Debrett’s – a relic of a bygone age – listing PewDiePie’s Felix Kjellberg, Zoella, Alfie Deyes and Jamal Edwards in its list of the 500 most influential people in the country.

Kate Glover, head of UK accounts at StyleHaul, the biggest fashion and beauty network on YouTube, says that brands need to shift their focus. "YouTubers are no longer a secret trend confined to the bedrooms of teenagers; they’re a reality of the media landscape," she adds.

It is a reality that increasingly demands marketers shift their focus to make better use of the platform. Ruth Barton, managing director of creative content agency VCCP Kin, says: "With TV consumption dropping to the floor more brands are investing in long-form content. YouTube is evolving; pre-roll advertising is a transition phase. It is a massive mistake brands make to run TV ads, when bespoke content that enhances existing content is a better strategy."

Digital has fundamentally changed the very foundations of what constitutes influence, with significant implications for brands. With this in mind, here are the five key marketing lessons from Generation YouTube.

1: Embrace fame for the web generation

Derek Scobie, head of YouTube brand propositions, Northern and Central Europe at Google, says that fame for the web generation has shifted. "How you become famous has changed; we sit back and get broadcasted at less. I don’t think it’s unique to YouTube but there are many more routes to fame. Essentially you can create your own programming guide and broadcast system," he adds.

According to research from Tesco Mobile, almost 40% of 16- to 25-year-olds said they would prefer to follow in the footsteps of professional bloggers, rather than make a living from being a reality TV star (6%). Young consumers clearly see a phenomenal social-media imprint as the key indicator of fame.

Matthew Hook, managing director of Carat, Europe’s biggest media network, says that peer-to-peer is a key trend. "Consumers want to see celebrities more as their peers. This is why you see stars such as Rio Ferdinand having direct relationships with their fans."

Ironically, although many of the new YouTube superstars achieve cut-through on the channel, they actively seek out exposure on more traditional media channels. He points to fashion and beauty vlogger Zoella as a case in point. "Arguably, she achieved mass-market fame through having a printed book and a radio show," he adds.

2: Beware the Myth of the ‘Screenager’

While the focus on video is important, marketers must avoid believing that they are broadcasting to an invisible army of teenagers who look at nothing but an ever-flickering screen. 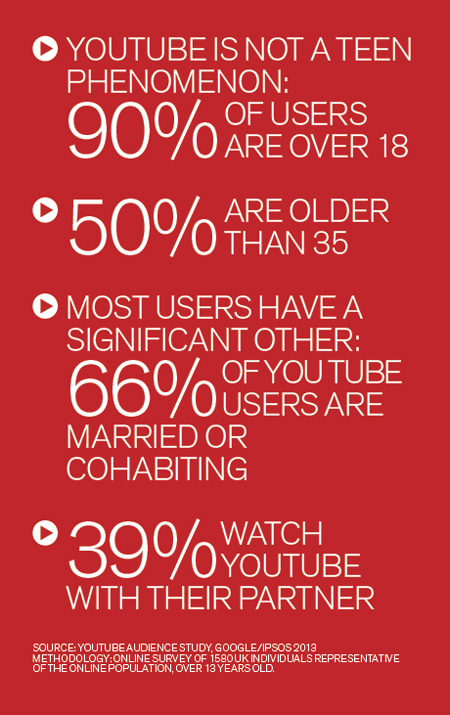 The average YouTube user spends five hours a week reading books and magazines and seven hours a week listening to the radio. Indeed, far from being the sole preserve of teenage boys in their bedrooms, 50% of YouTube’s audience are in fact over 35.

Nor should marketers confuse the volume of focus on teen YouTube sensations with being an accurate reflection of the diversity of the video platform’s content and audience. While traditional media channels have defined demographic audiences, YouTube stars rise and fall and, as such, marketers must address the platform as a constantly evolving ecosystem.

"Vloggers are part of the rock-star paradigm and were, until recently, the sole preserve of the younger audience – but things are changing. As brands have become more aware of vlogger power, as with any other influencer, role model or talent, this talent has become more valuable to brands and advertisers," explains Russ Lidstone, former chief executive of advertising agency Havas.

Influencers from Generation Y and Z have built huge audiences on YouTube, Vine and Instagram, and brands have already started working with these teen media moguls. However, the rapid growth of this online entertainment universe points to a widening gap between those ‘born on the web’ and millennial and post-millennial audiences.

The first true generation gap since the 1960s, a phenomenon which is driven by young consumers embracing their peers over more traditional media voices

According to trend consultancy Stylus, this constitutes "perhaps the first true generation gap since the 1960s, a phenomenon which is driven by young consumers embracing their peers over more traditional media voices".

However, it is not only young consumers who are embracing peer-to-peer marketing. Courtney Maywald, strategist at communications network Publicis Chemistry, says: "YouTube is the second biggest search engine in the world. Ask your mum – if she’s online, she’s more than likely watching stuff on YouTube, too. So while there are no superstar Granny YouTubers yet, it is only a matter of time. We’re already witnessing the rise of the Major Mummy Vlogger, like Surrey mum Anna Saccone, with two kids, six Maltese Terriers and 550,000 subscribers."

4: Flawed is the new flawless

The YouTube era’s emergence must be viewed as part of a broader shift toward transparency and authenticity, which has significant implications for brands.

This presents a twin challenge for brands seeking to bask in the authentic glow of YouTube vloggers without alienating their audience or damaging their credibility.

Lidstone says YouTube celebrities work because their audience wants authentic perspective. "The danger for the celebrity is that endorsements compromise their perceived objectivity, which is at the root of what initially made them popular," he argues.

Continued reliance on pre-roll advertising and the slick commercialised 30-second spot fails to tap into the authenticity and immediacy the medium demands. To truly capitalise on this trend, brands should invest in creating their own content or partnering vloggers.

5: Embrace video as a form of speech in its own right

We are in the middle of a step-change in communications. Just as previous generations had to learn how to use a landline, then the mobile phone and smartphone, today’s consumers are adapting their communication to adopt images and video as a casual part of speech in their own right. Using the phone as a channel to talk is in significant decline. After a decade and a half of uninterrupted growth, the amount of time Britons spend on the phone went into decline in 2011 and has continued to drop. Today’s teens are more accustomed to image and text-based communications, their understanding and use of visual communication flawless.

Video is nearer to how we naturally communicate. We were taught to consume words by text but video offers a more human way to connect

She adds: "Video is nearer to how we naturally communicate. We were taught to consume words by text but video offers a more human way to connect."

In line with this, brands need to shift not just the platforms they use to reach consumers, but reassess the tone, style and substance (or lack thereof) of their advertising messages.

I’m always a bit worried when people talk about YouTube and You Tube ‘stars’ as though they were some mysterious new phenomena, opaque to anyone over the age of 20. YouTube has been around for 10 years now and constantly gives out data about how it works – there’s nothing mysterious going on here.

YouTube won’t take over TV advertising, because people don’t watch YouTube like they watch TV. It can do a bunch of unique things but it can’t do what TV advertising does. YouTube is neither a threat to TV nor a substitute for it. Anyone who thinks either of these things understands neither TV nor YouTube.

Despite what journalists think, YouTube views are not an ‘effect’ of advertising. At best – putting aside the issue of ‘real’ views – they are an efficiency metric, with organic views enabling reach to be achieved more cost-effectively. But few brands will be able to make the most of this to any great degree. It is not a game everyone can play and win.

Pre-roll advertising can be a useful tool to expand reach – especially among audiences who watch little or no TV – but ultimately suffers as a form of media because it makes your YouTube experience worse. One thing that the tech economy is teaching all of us is that people don’t like to wait for things – even for a few seconds. In my view, in 2015, it’s not a good idea to be something that makes people wait for what they really want. When a pre-roll ad comes on, my eight-year-old daughter groans and complains. Bear in mind, all her clothes, food and the house she lives in are ad-funded. If she feels that way, then there’s not much of a future in this for anyone else.

YouTube ‘stars’ are one of the most refreshing and exciting things to come out of the platform. It has helped to democratise talent by handing the means of production to the people and it has smashed the hegemony of producers and editors at broadcasters. It’s great that these stars can develop such an intimate relationship with audiences and not a problem at all that they are often disproportionately famous with a younger generation.

Brands and broadcasters can use YouTube celebrities in two distinct ways. When you get them involved, they bring their audience with them, enabling your advertising to be cross-promoted on their channel but they are also tried and tested talent. That can easily be introduced to broader audiences beyond YouTube. Their mass-market appeal should lie not in their fame but in their talent.

Perhaps the greatest challenge that YouTube offers to TV is in the regulatory framework. On YouTube, the line is often blurred between entertainment and commerce. Audiences seem quite easily able to navigate it without a banner saying "this is an advertisement". Given the maturity and ubiquity of this media, it might be worth Ofcom thinking about whether the labyrinthine restrictions on advertiser-funded programming and long-form advertising are really helping either audiences, broadcasters or brands nowadays.

Us marketers, we don't know what we're doing

ASA calls for clearer guidelines between vloggers and brands