Say what you will about the new logo (and many, many, many have) but the launch of the new Airbnb brand was handled masterfully—from the pre-launch teaser right through to the post-launch damage control via Twitter. In the Internet pile-on age, when large companies are conditioned to fear wholesale change it's refreshing to see a company confidently herald something new in such an engaging, inclusive manner.

Airbnb wasted no time educating its customers on what the new brand stood for and what it meant for the business, even going so far as introducing a platform for customers to create their own interpretation of the brand’s symbol. This launch was a declaration of what the once-quiet back channel booking agent had grown into. It appeared spontaneous while leaving nothing to chance. It proactively told the story Airbnb wanted the world to know and that’s pretty much the best thing a young brand can do.

When it comes down to it, the success of Airbnb’s launch can be distilled into five core principles that every brand should keep in mind at launch:

According to Bloomberg Businessweek, Airbnb invited the press to an $895/night Tribeca loft before the launch where Joe Gebbia, one of Airbnb’s co-founders shed light on the planned changes. If you examine Businessweek's article a bit closer, you'll notice the lead graphic was this GIF provided by Airbnb. Why have someone reinterpret your story if you can furnish it directly?

Anything preventing a launch from appearing abrupt or unplanned is highly advisable. By creating a simple launch site, airbnblive.com, complete with a countdown clock and an interview with the founders, Airbnb took control of the conversation. The campaign's teaser line, "See what's brand new" was descriptive without overpromising. 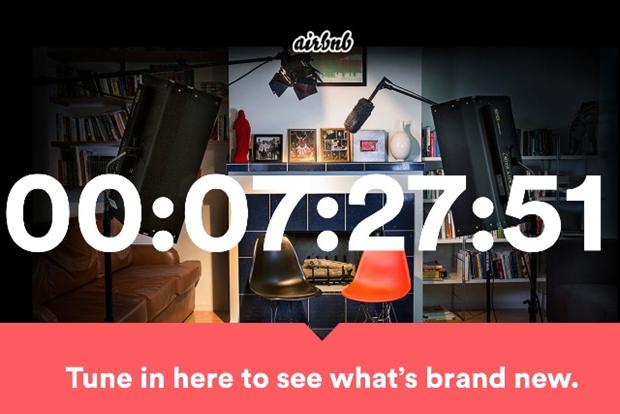 Yahoo! overpromised and underdeliverd with its 30-days-of-new-logos launch campaign. GAP did the opposite byleaking a logo without conviction or narrative. The Airbnb approach falls somewhere in the middle. Without overcomplicating things, the company made a big statement seem basic.

3. Deliver a compelling story with room for contribution

By confidently telling its story across all channels (product, blog, motion, social), Airbnb secured its best chance at defining itself on its own terms. By engaging the community with personalization and storytelling tools like create.airbnb.com and continuing a genuine 2-way social dialogue, Airbnb brought its biggest fans and supporters into the fold.

This is rebranding 101 but it's amazing how often it doesn't happen. Airbnb clearly held off on this launch until it had a new and improved customer experience to launch with it. Forget scrubbing old logos, Airbnb redesigned nearly every important customer touchpoint. The website is littered with tangible examples of how the new brand is making things better and, more importantly, why.

Yes, Airbnb offered the expected posts promoting the new brand. And of course, Twitter and Instagram were seeded with compelling new content and major brand partnerships. But the true highlight of Airbnb's social strategy was how deftly it handled the unplanned hiccups and curveballs.

When observers pointed out some less-than-wholesome aspects of the new symbol, Airbnb responded with light-hearted acknowledgement

When Erik Spiekermann pointed out a striking similarity to another recently rebranded company, Airbnb went right to the source, straightened it out, and released a joint statement. Sure, that might be easy to do when you're a company valued at $10 billion, but what's so remarkable is that it happened almost immediately.

Call it PR, social media or community engagement, but Airbnb convincingly personified its brand with honest communication and passion. The company appeared smart, caring and undeniably human. All the world's innuendo can't take that away from them.

Airbnb counts down to event unveiling evolution of brand

Is the design industry in serious need of a rebrand?