Park Village's Harry Bradbeer discusses Fleabag's effect on creativity and how storytelling might evolve in TV, film and advertising.

Few TV series in recent memory have had quite the impact of Fleabag. The BBC’s comedy drama, created and written by Phoebe Waller-Bridge, was a hit among the public and critics alike, sweeping awards shows and inspiring a generation of creators.

Harry Bradbeer directed both series of the show, working closely with Waller-Bridge to bring the work of her "naughty hand", as she calls it, to life on screen. He was also the lead director on the first series of Killing Eve (also written by Waller-Bridge) and has shot ads, including Durex’s "Ladies let’s lube", through Park Village.

While at home during lockdown and preparing for the release of his feature film this summer, Bradbeer talked to Campaign about the Fleabag effect on creativity, what makes a compelling show or ad and why he hopes to see more love stories after this crisis.

How is lockdown going for you?

I’m spending it at home with my family. It’s been quite busy because just before lockdown I was finishing a movie which I've been making, Enola Holmes, which is now coming out through Netflix in August.

I was about to go to America straight away to do a show for Hulu and Searchlight about Elizabeth Holmes [founder of failed blood-testing start-up Theranos]. That’s been put off, but we’re still doing prep; we just don’t quite know when we’re going there yet.

Tell us about your upcoming feature film.

Enola Holmes is an eccentric feminist adventure starring Millie Bobby Brown as Sherlock Holmes’ teenage sister. She has this very unconventional upbringing, brought up in the wild by her mother, played by Helena Bonham Carter. The mother runs away suddenly and the girl is left on her own. Her brothers try to force her into boarding school, but she runs away to London to escape and, like her brother, she becomes a detective in her own right.

You seem to be drawn to female empowerment stories.

Someone asked me why I do so many female stories and you’d have to ask my therapist – I don’t know. I’m really interested in how women tick. As Phoebe [Waller-Bridge] said, I would just keep asking her questions. I think a lot of men, it’s safe to say, tend to tell women what to think and what to do. I really like sitting in the driving seat of a female imagination.

What was it like being in Waller-Bridge's driving seat?

[Waller-Bridge and I] would do a certain amount of role play – there were lots of 2am moments of her typing away while we thought aloud. We used to say, if it’s weird, we’re getting somewhere.

Someone once said that to create universal appeal, you have to be very specific. It’s those specificities of character that come out of her and her fingers. She calls it a naughty hand when she’s writing, that will twist and change and enhance, making it more mischievous.

Did you expect the second series of Fleabag to resonate with people so much? Why do you think it did?

We were very nervous making it, partly because we felt that Fleabag had completed a certain journey. [Series one] was a classic tale of redemption which ended with catharsis and it felt that she had told that story in a complete way. We didn't want to do a second series unless it was really good.

When it became a love story, it turned out to be worth doing and very prescient. Something in people wanted to see a love story. You see that now in stories like [BBC TV series] Normal People. People have an appetite for a story of love and something that is honest and uncynical.

We knew Fleabag was complicated in her attitudes towards men, trust and sexual gratification and validation. When you put that together with a Catholic priest – that is a strong bit of tension. Underneath that is what we used to call the real love story, the one between her and her sister. So you have two love stories; one is very fraught with history and the other is fraught with religion and ethics.

The fact that it was about God had an extraordinary effect on people. It was digging deep in our idea of faith – faith in ourselves and faith in something other than ourselves. And it’s also funny: how does someone like Fleabag end up with a Catholic priest?

It was very honest about the pain of love – what you give of yourself and what you lose of your own dignity when you give yourself over to someone else. Perhaps that speaks to us and why we find it so hard to do it. 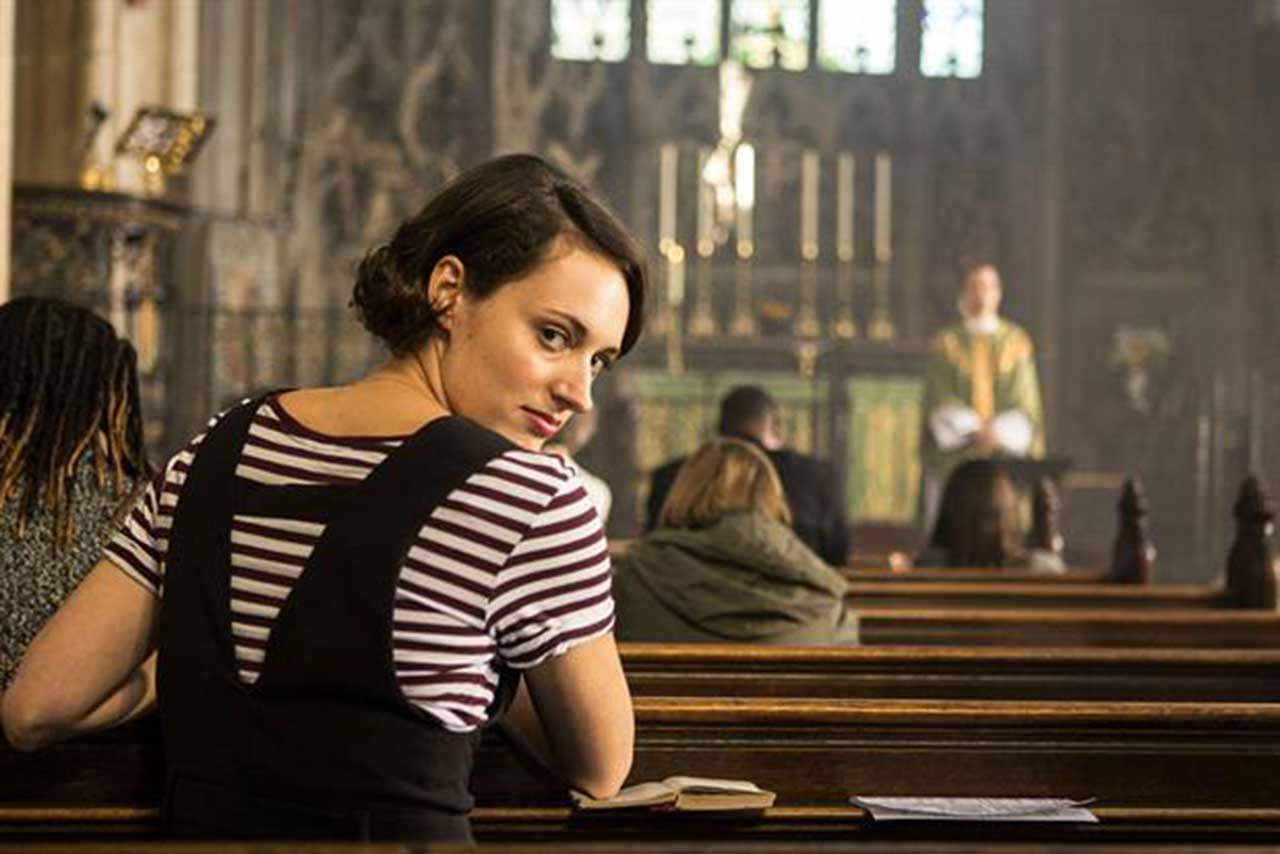 People have spoken of the ‘Fleabag effect’ on TV, film and storytelling. What do you think this means and how do you see it influencing culture?

There is a fruitful discussion about bringing comedy and drama together, because it’s not often that you can go that far in comedy and pathos at the same time. That's a balance that’s quite hard to reach. The idea of telling a story that runs very deep while also being hilarious is certainly an advance.

This was a woman’s story that was unapologetic, rude and honest. Perhaps it’s given people more confidence. A lot of female writers have come to me and said it inspired them to write honestly about their own experience. Phoebe says to write like you have no fear – and it’s encouraged more writers to work like that.

The half-hour format has been given a new kind of respect. For a long time, half hours were just a place for comedy, not necessarily comic drama. Being able to tell those tight stories in half an hour was a real pleasure.

Why do you think some Killing Eve viewers liked Villanelle [the assassin character] so much?

Because she gets something she needs out of these murders. She’s fascinated by death and watching life go out of people’s eyes. There was something in her that desired life. Her sense of humour and naughtiness really appealed to people, and her wit and mischief in the way she kills people off. She’s very unknowable, because she is a psychopath and someone who has no true emotional barometer. That’s appalling and also attractive. She was an individual, funny and mischievous.

I like the idea of her being unapologetic. People often talk about "strong" female characters, but that’s the wrong word. "Strong" characters are specific, individual, unapologetic and surprising. Those are the characters that are good, whether male or female.

You directed Durex’s ‘Ladies let’s lube’ campaign [in 2019]. Why did this ad appeal to you?

I liked its honesty and humour. It felt like it had something useful to say and give to women – it wasn't just selling a can of beans. It was tapping into and opening a door which I hadn't seen open often enough. There was a kind of mission behind it, which I loved.

Fleabag, which is closer to my heart than Killing Eve, was instrumental in opening up a door for many women to see more honestly into themselves. That is another thing that the lube advert did.

What kind of ads do you want to direct?

Ones that are beautifully written with characters I can believe. An ad which has something to say or one that makes you cry. I loved the John Lewis penguin advert ["Monty the penguin" in 2014] – that was a joy and had a lot of elements which appeal to me. It’s not cynical and requires honest, spontaneous performance. The writing is well-crafted. I feel for the product and people around it. I’ve always wanted to make films that move me and that's the same with commercials.

People are far more likely to buy something if you move them emotionally. It’s about finding emotion and not just being clever – more Fleabag than Killing Eve.

What changes do you expect to see in the creative industries after this crisis?

I’m hoping that working from home will help people who have children. Childcare is a huge issue in the business. We may have got used to working in such a way that it’s going to make that easier.

There’s also a question of how we’re going to be intimate with each other again. Filmmaking is such a tight-knit process. I can’t be too optimistic about that, but it’s something we need to get to know.

People are going to become a bit more romantic about intimacy and being closer to each other and it may bring out more love stories in our output. People are going to value human relationships more than they have, because they’ve been deprived of it. I’m hoping it will make us less cynical in the work we’re making.

If we are to be filming in smaller amounts, with smaller crews and casts in more isolated situations, maybe people’s stories are going to become more direct to camera in the same way Fleabag was.

Have you watched anything in lockdown you particularly enjoyed?

Normal People. That speaks to everything we've been talking about. There is an extraordinary opening of the second episode, where we spend 10 minutes in one love scene, from that moment she starts making up before going out, then getting to him and having their first sexual encounter. It felt like you were going through an experience in real time.

There was no shot that wasn’t hinged on one or the other of them. I get very impatient with work that seems to drift, which has wasteful material. Everything about that show and that particular section was direct and fearless, honest and all about performance.

This goes back to the commercials I like – they have interesting characters in them. That’s the challenge: you have 30 seconds or maybe more to tell your story. Have you got to know those people, are you hooking into them? Do I believe it and do I care?

All hail the Fleabag effect on creativity

Netflix and the Phoebe Waller-Bridge conundrum