Upfield, the Netherlands-based owner of the Flora food brand, has decided to stop working with Mumsnet after a trans activist drew its attention to "trans-hostile posts on its website".

Flora came under pressure after the activist noticed its packs had started featuring a ‘Mumsnet Rated’ badge and declared she would no longer buy it.

Mumsnet Rated is the parenting website’s commerical product endorsement business, which is based on reviews by Mumsnet users and has awarded the status to the likes of Yeo Valley’s Little Yeos, the O2 Family Plan and the Sky Kids app.

The activist, who posts on Twitter as @mimmymum and has just over 8,000 followers, raised the issue on 9 October in a tweet which has since received 339 likes. 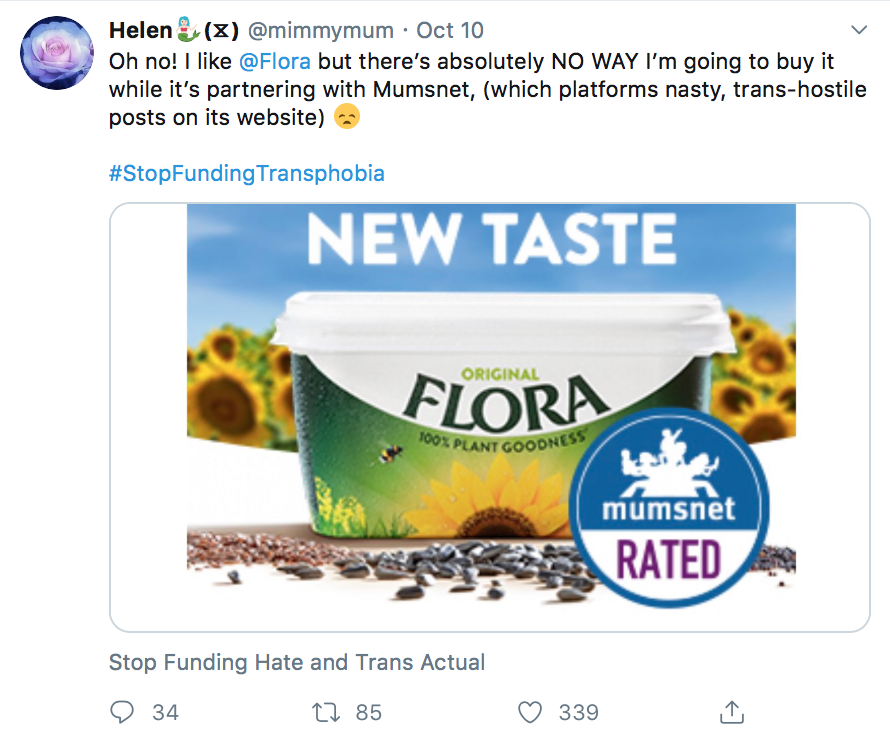 Two days later, Upfield replied: "We've investigated. We are wholly committed to our values, which include treating everyone equally, so have made the decision to no longer work with Mumsnet. #DiversityMatters @Flora."

Stop Funding Hate, the campaign group that pressures brands to withdraw advertising from media it sees as discriminatory, brought both tweets to greater prominence by retweeting them to its 96,000 followers.

Mumsnet has responded to the affair by underlining its commitment to free speech, which it said it balanced with deleting transphobic comments when they are flagged.

In addition, its founder Justine Roberts was quoted by the Daily Mail as saying that Flora had bowed to pressure from "a handful of activists on Twitter".

She said: "Mumsnet has turned down hundreds of thousands of pounds of advertising over the years from companies which we feel don't make parents' lives easier, so we're well used to putting purpose before profit. I do think in the end consumers will value companies which show a bit of backbone."

Upfield also owns a number of other spread brands sold in markets outside the UK, including the US, Europe and Brazil. Its chief marketing officer is Uwe Sommer, who is also the CEO of its Europe operations and its general manager in Germany.

Campaign sought to clarify whether Upfield had incurred any penalty under its contract with Mumsnet, but an Upfield spokesperson said the company was unable to comment because of commercial confidentiality.

The spokesman also provided a fresh statement about its decision to stop working with Flora:

"Flora has been a brand for everyone for over half a century. We have always been supportive of women and mums and will continue to be. We are also wholly committed to our values and Human Rights policy which includes treating everyone equally and feel that more could be done to moderate online discussion and tackle discriminatory posts."

A new wave of LGBT+ media is demanding respect

What the closing of Gay Star News means for queer advertising

TBWA campaign urges parents to 'come out' for their LGBT+ children