Press was the most valuable advertising medium (ahead of TV) for decades. It was only when the internet took off that print newspapers and magazines declined and the market dramatically changed with consequences that are still unfolding.

Hugh Cudlipp stared into the camera, a cigar between his fingers, on the front of the debut issue of Campaign in September 1968, and declared: "I detect a swing among advertisers away from TV and into the press."

With hindsight, Cudlipp, chairman of IPC, the then owner of the Daily Mirror, might sound hopelessly optimistic, yet he was right. There was a swing back to press as Rupert Murdoch bought The Sun in 1969, marking the start of his remarkable dominance as a media owner that has lasted throughout this past half-century.

Press – newspapers and magazines – had a combined 70% share of UK adspend in 1968, and peaked at 73% in 1974. TV gained share slowly but advertisers would continue to increase the value of their print investment during the 1980s and 1990s.

Press declined in value only after 2005, when it dropped below a 50% share, according to Warc, which has supplied this data for Campaign’s 50th anniversary. The decline of press accelerated after the 2008 financial crisis, dropping below 30% in 2010, as TV and the internet each took a greater share for the first time.

Today, the internet reigns supreme, with more than 50% share, and TV has held steady with nearly a quarter. Press has dropped to 8%, even though newspapers and magazines have picked up some online revenues.

The dramatic plunge underlines how violent the change has been in the past decade.

Adjusting for inflation, adspend has risen 183% in real terms – almost exactly in line with a threefold increase in the wider economy, based on GDP figures.

Back in 1968, press ad revenues were three times the size of TV, which explains why Murdoch saw such a big opportunity when he acquired The Sun, although he also built up a stake in LWT. Murdoch turned The Sun from broadsheet to tabloid (and introduced "Page 3"), prompting the Daily Mail to reduce its size in 1971 and the Daily Express to follow in 1977. Murdoch’s title overtook the Daily Mirror to become Britain’s biggest-selling paper in 1978.

Press ad revenues quadrupled to £1.5bn by 1980 – although inflation was a serious economic problem. Television’s revenues rose six-fold to more than £600m, yet there was only one commercial channel, ITV. It was served by different regions and franchises – each with its own sales director, such as LWT’s gregarious dealmaker, Ron Miller.

The BBC had a stranglehold over radio but the rise of pirate stations led the broadcasting authorities to grant licences to LBC and Capital in 1973. Commercial radio’s ad revenue jumped from £1m to £50m by 1980 but it was barely 2% of a £2bn market.

Media planning required little sophistication. "It was dead easy – you were either on telly or on posters or in press," Guy Zitter, former managing director of the Daily Mail, who started in Fleet Street in 1980, says.

Newspapers held so much sway with advertisers because, as Zitter put it: "If you wanted immediate reach and didn’t mind the quality of the reproduction, you would reach 13 million people the following day – smack, that was it."

Press and TV ad revenue both trebled during the Thatcher decade as free-market economics and deregulation drove growth. Murdoch took on the unions when he moved The Sun and The Times to Wapping in 1986, which improved efficiencies and paved the way for Today, the first colour newspaper, and The Independent to launch in the same year.

"Moving out of Fleet Street and not to have a cleansing vodka and tonic at 10am every morning was a hell of a shock, let alone the advent of colour printing," Zitter recalls, half-joking, before explaining how newspapers became more efficient and doubled ad yields by moving from black and white.

Commercial TV blossomed with the launch of Channel 4 in 1982 and the ITV breakfast franchise TV-am in 1983. Breakfast TV might seem a minor development, but Colin Gottlieb, EMEA chief executive of Omnicom Media Group, who began his career as a planner buyer at the end of the 1970s, says: "It was a material change. It was the beginning of the culture of 24-hour television and the idea that you could create content across the day."

Murdoch would exploit this new market by setting up satellite pay-TV platform Sky in 1989.

The rise of media agencies

By the end of the go-go 1980s, the £7bn ad market was growing at 10% a year and becoming more complex. A wave of entrepreneurs quit traditional agencies and set up media shops with planning and buying capabilities and trading muscle – as opposed to focusing on creating and producing ads.

The first media "independents" emerged in the 1970s but the tipping point came when Saatchi & Saatchi group, which was founded in 1970, took the media departments of four different agencies and merged them to form Zenith in 1988. Other new entrants included BBJ Media, PHD and Manning Gottlieb. Many went on to become global networks and key parts of the big agency holding companies.

Jerry Buhlmann, co-founder of BBJ Media, sold his agency to Dentsu Aegis Network, where he is now global chief executive.

WPP, which Martin Sorrell set up in 1985, was relatively late to invest in media, with the foundation of Mindshare in 1997, but it leveraged trading scale aggressively by setting up buying unit Group M in 2002.

Tim Berners-Lee invented the world wide web in 1989, yet it took a decade to generate meaningful ad revenue. In 1997 – the first year the internet registered on Warc’s figures – it brought in £8m.

Newspapers and magazines continued to grow, fuelled by a boom in classified job ads and glossy supplements, as Britain recovered from the 1990-91 recession that nearly felled both Sky and WPP. "It was The Sun wot won it," Murdoch’s tabloid boasted after the 1992 general election.

Lorna Tilbian, former head of media at Numis Securities, who spent more than 30 years in the City, says: "For print media, advertising was a licence to print money until the internet came along. It was a wonderful model. The advertising would fall in a downturn, but then you could put a few pennies on the cover price."

Adspend passed £12bn for the first time in 2000. Press generated £7bn, TV about £4bn and internet advertising just £150m. Stocks in online companies slumped after the dotcom bubble burst but 2000 was a landmark as Google opened a UK office, two years after its US launch. It was making more than £2bn a year in UK ad revenues within a decade, leapfrogging ITV to become the biggest media owner in Britain in 2009 as print classifieds migrated online.

Records tumbled: internet spend overtook cinema in 2000, radio in 2004, out-of-home in 2005, magazines in 2006, newspapers in 2009 and television in 2011 – even if those figures don’t take into account how established media channels began generating digital revenue.

Super-fast broadband, the smartphone and social media accelerated change. "Everything can be traced to 2007," Gottlieb says, describing Apple’s iPhone launch as the most pivotal moment for media consumption since the dawn of commercial TV.

However, US tech giants were exerting a vice-like grip on digital ad growth, despite doubts about online effectiveness. Facebook, which opened a London office in 2007, overtook Channel 4 and Sky to become the UK’s third-biggest media owner, behind Google and ITV, in 2017.

British media organisations suddenly looked modest in the shadow of Facebook, Apple, Amazon, Netflix and Google, dubbed the FAANGs. Murdoch described it as a "pivotal moment" and sold Sky. As Campaign marks its 50th anniversary, Britain’s media industry is entering a new era.

UK adspend has soared from £450m in 1968 to £22bn in 2018. Adjusted for inflation, this represents a 183% real-term rise, mirroring that of the wider economy, based on GDP figures. Click on the image to see a larger version. 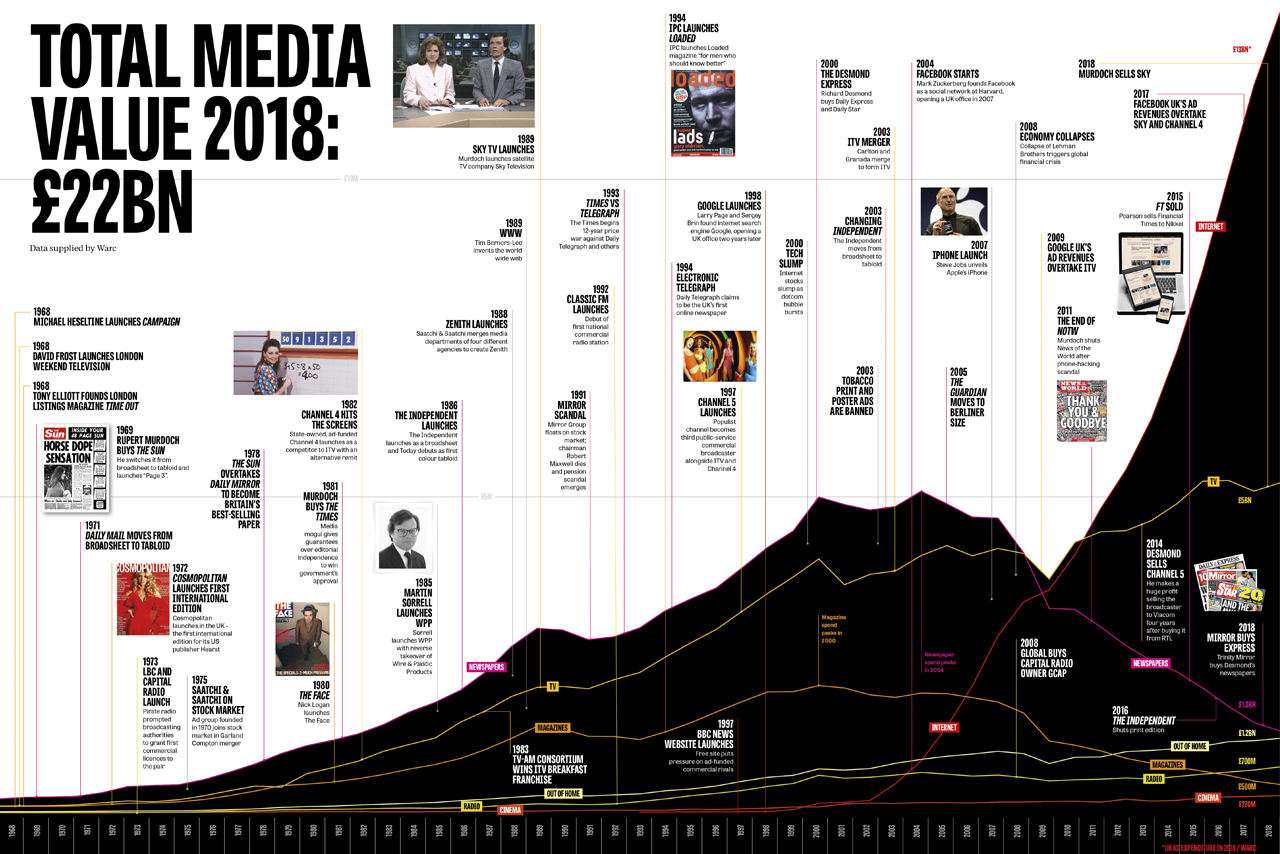 Inside Global's big bet on outdoor: the money, the strategy, the digital opportunity