The sports body's chief commercial officer is determined that it should be more proactive in bringing big-name brands to the fans.

They say you should keep your friends close, but your enemies even closer.

The Football League and Premier League may not be sworn rivals, but individuals working at the former must surely let out a sigh each time they hear the Champagne corks popping at their shared Marylebone base, in celebration of yet another record TV-rights deal for football's 'big boys'.

Since the top 20 English clubs broke away from The Football League in 1992, the Premier League has steadily increased its power and prestige, leaving the remaining Football League divisions – the Championship and Leagues One and Two - and their 72 clubs languishing in the shadows.

In an attempt to bolster its brand and revenue streams, The Football League has recruited former NBA executive Richard Heaselgrave as chief commercial officer. It has high hopes that, as one of the individuals hired to grow NBA basketball outside the US – current RFU chief commercial officer Sophie Goldschmidt was another – Heaselgrave's innovative approach will lift the perception of its product among fans and brands alike.

Heaselgrave is far removed from the boorish stereotype attached to those working in football – his voice, for instance, rarely rises louder than a whisper. And, although he hails from a footballing family, the former Anheuser-Busch sponsorship boss played professional rugby union in France, and has spent his career working in a range of sports, from motor racing to skiing.

With a knowing smile, he admits that reinventing The Football League, now in its 125th year, may well be his greatest challenge. 'We're the oldest sports league in the world,' he says. 'That's an amazing thing, and the board have finally realised we've a lot to shout about. We attract millions of fans to games every year, so commercially it's time to push on.'

The statistics are certainly impressive: nearly 17m people attended Football League games last season, while its network of websites attracted more than 8m unique visits. Heaselgrave also gushes about the marketing potential of the '£90m match', the Championship play-off final for promotion to the Premier League, which is widely considered to be the most financially rewarding encounter in world sport.

While the likes of Doncaster Rovers, York City and Torquay United may not set potential sponsors' pulses racing, the League's network of 72 clubs provides unmatched geographical breadth. In Heaselgrave's words, if The Football League were a sport in its own right it would be 'enormous'.

'If you are a fan of our clubs, you are often more committed to that than anything else in your life. You're not a fan of Crewe Alexandra because you're showing off - it separates off the "festive fans" that, say, Chelsea would get. Our selling point is the collegiate combination of the clubs,' he comments.

Yet, while Football League annual revenues have topped £100m for some time, this is dwarfed by the scale of the Premier League's £1bn-a-year domestic TV rights deal. If The Football League stands any chance of keeping pace with its prodigious offspring, Heaselgrave must package the League as a viable alternative for brands looking specifically at the UK market – something he is confident he can do.

'There are limitless opportunities to talk to our fans as a brand. People pay money to see our games in every corner of the country – which brand wouldn't want to talk to those people? We have a higher number of ABC1s, cumulatively, than the Badminton Horse Trials. Our clubs attract women, kids, men aged 18-25. We can say to marketers: "Who is your audience, where are they, and what do you want to communicate to them?" and then provide a solution,' he says.

The Football League has hitherto focused heavily on getting the best possible price for its title sponsorship properties across the League and League Cup – currently held by Npower and Capital One respectively. The latter signed up this year, replacing long-time incumbent Carling as sponsor of the knockout tournament, which includes Premier League teams, while energy company Npower has only one season left of its estimated £21m, three-year deal as League sponsor. The League has also signed up an array of category suppliers, including Kia Motors and sports equipment manufacturer Mitre, to complement its broadcast deals with Sky and the BBC.

However, Heaselgrave believes this approach is partly to blame for the organisation's mediocre performance to date.

'In the past, The Football League was too focused on those title sponsors and a few suppliers, but it is so limiting,' he says. 'I just feel there is more we can do.'

As well as ensuring the League secures a blue-chip title sponsor for next season and beyond, the commercial chief is focused on the smaller deals, which, as well as increasing revenue, may act as persuasive case studies for future big-brand sponsors.

One such example is a partnership signed earlier this month with online betting brand Bet Butler, replacing its deal with Coral. In a departure from its previous method of working, the rights-holder will be responsible for the sponsorship's execution, with a Bet Butler team working in-house at the League.

'We've always had a betting partner, but it struck me that, even though we could go out to the old favourites, it wouldn't be pushing the needle,' says Heaselgrave. 'With Bet Butler, we've become its agency, with the obligation to deliver not just the rights but also the performance. Who knows the fans best – a marketing agency in London, or the clubs and the League?'

He adds: 'I would like to do more of that. We can make more money from it and it will deliver more value for the partner, but also those are fantastic case studies to attract other brands. It's about trying to be more proactive.'

Heaselgrave agrees that, to fully convince potential sponsors, Football League clubs must heed the 'Olympic effect' and consumer expectations. The days when the idea of a trip to the football evoked images of violence and crumbling terraces are, thankfully, long gone, but the positivity generated by London 2012 has transformed sport.

Heaselgrave denies that football should feel threatened by the sudden popularity of sports such as cycling and athletics, claiming that – after a dip in July and August – online searches for football clubs have returned to pre-Games levels. However, he concedes that spectators expect more when they attend matches.

'There are strides we can make across the 72 clubs to improve the match-day experience. People now have more choice about how to spend their Saturday afternoons, and we're looking at how we can learn from the Games Makers volunteer approach,' he says. 'When I went to the Olympic Stadium, I felt welcome and it was something I'll never forget.'

If Heaselgrave succeeds in putting a spring in the step of The Football League, he says its brand identity would come under the microscope, claiming it would 'need to communicate' any positive cultural differences. However, first and foremost he will be judged on the level of revenue coming into the organisation.

'Confidence' is the buzzword Heaselgrave returns to time after time: to imitate, rather than be intimidated by the brash exuberance of the Premier League. If some of those plans come off, who knows: perhaps a few Champagne corks will be popping in the Football League boardroom, too. 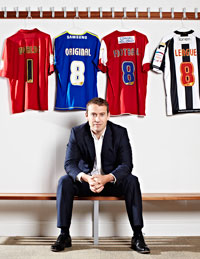 Hobbies Sport. 'My father and grandfather were professional footballers, both for West Bromwich Albion. I played rugby professionally, and I love skiing.'

Favourite brand London 2012. 'It was such an amazing success of detailed planning, and it might not have been. The way the crowds were at the Paralympics was incredible.'

THE SPONSORSHIP - THE CAPITAL ONE CUP 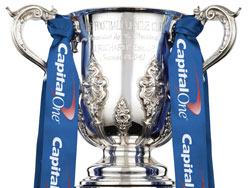 In May, it was announced that Capital One had taken on the sponsorship of the League Cup in a four-year deal, after lager brand Carling opted not to continue its 14-year tie.

The credit-card brand hopes the deal will help it to re-establish its brand in the UK, after a period in which it carried out little marketing. Capital One's chief marketing officer, Michael Woodburn, says the brand wants to become associated with 'opportunity'.

He adds: 'The other key resonance is that the Cup and The Football League are very much about authenticity both of teams and fans. That is something we are striving for as well. We're a very authentic organisation, we really try to deliver and want that to come across.'

How UEFA has looked to grow its Europa League brand

Capital One Cup 'will help brand stand for opportunity'

Capital One in frame to become League Cup sponsor