Almost four in ten people using ad-blockers are "whitelisting" the Financial Times' website and agreeing to view ads after being asked to do so, a survey by the newspaper reports.

A sample of 15,000 registered FT.com users were split into three groups and encouraged to whitelist the website by giving them varying degrees of access to content. 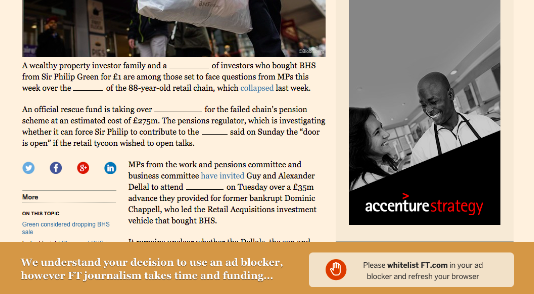 Registered users only make up 0.75%, while about 20% of the FT.com’s traffic comes from people using ad-blockers, the FT said.

Last month, the financial newsbrand released an advertising charter, which outlines its commitment to readers on issues like trust and transparency. It claims user experience will never be compromised by the ad experience.

Publishers such as The New York Times have experimented with blocking website visitors using ad-blockers, while Facebook has sought to nullify the likes of AdBlock Plus by making commercial content indistinguishable from non-commercial content in newsfeeds.

Dominic Good, global advertising sales and strategy director at the FT, said: "Through open dialogue with FT readers we are emphasising the importance of advertising as a revenue stream for quality, independent journalism.

"These results show that FT readers accept advertising as part of the reader/publisher value exchange, and they trust us to create the best possible advertising experience with our partners."

Adblock Plus to launch delayed ad exchange in December

Ad-blocking on linear TV: could it happen and what would we do?