Game, the beleaguered gaming shop, has taken time out from dealing with the aftermath of administration to run a light-hearted ad making fun of the horsemeat scandal.

The press ad, which appeared in The Sun today, has the tagline, "We make mince meat out of anything", in white letters against a dark background.

It is understood that the ad was designed by Game Group’s in-house team.

A spokeswoman for Game said: "Although several of the games sold at Game feature horses ['Red Dead Redemption', 'Assassin’s Creed', 'Darksiders', etc], we have double-checked and none of our products actually contains horsemeat.

"However, we do encourage 100% horsepower when gaming."

Other recent marketing from the retailer includes a partnership with IGN Entertainment for a series of activities, beginning with an offer to play Xbox 360 game 'Gears of War: Judgement' in-store, ahead of its release.

Campaign’s sister magazine Marketing revealed this morning that Game is seeking a marketing director , as the incumbent Anna-Marie Mason prepares to leave the retailer in the coming weeks.

A number of brands have taken advantage of the scandal over horsemeat in products labelled as beef, including Mini in an ad designed by Iris. 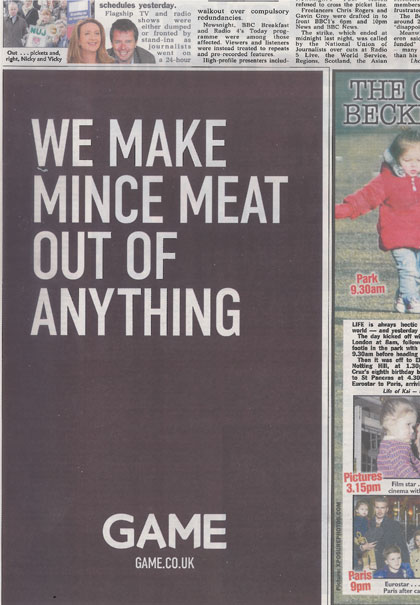 Findus is latest brand to be caught up in horsemeat scandal