Donald Trump gets a grilling in Gourmet Burger Kitchen's latest ad campaign, which lampoons the US presidential candidate by comparing him to a hamburger.

The campaign, created by You Agency, aims to convey that GBK is the original premium burger restaurant in the UK, using the US presidential election campaign as a hook. 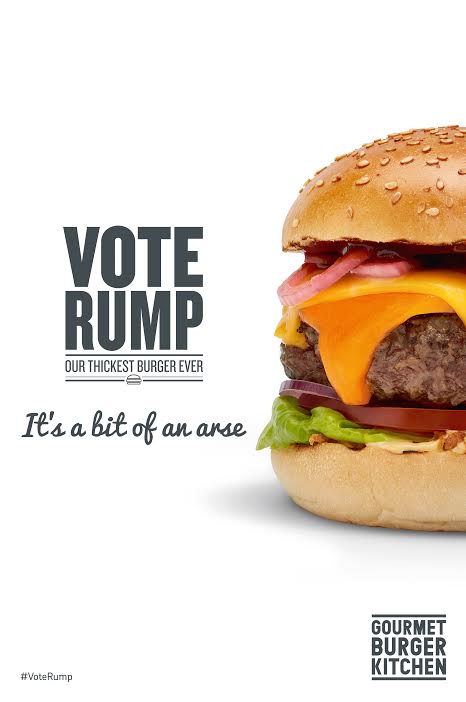 GBK apologised in January for its previous ad campaign which sparked a deluge of complaints for mocking vegetarians.

You, which was also the agency behind the previous ads, said the controversial posters had garnered "worldwide publicity, all for a mere £100,000". The agency added that the Vote Rump campaign "promises to deliver a similar level of talk-ability".

The "Vote Rump" ads will appear nationwide, with a particular focus on Transport for London poster sites, with one 48 sheet positioned at the exit of Westminster Station for the benefit of those working in and around Parliament.

GBK, which is being sold to Wimpy owner Famous Brands, has operated in the UK since 2001.

Erin Kennedy, marketing director at Gourmet Burger Kitchen, said: "Sometimes it’s the simplest ideas that are the most effective, and our new Vote Rump campaign is a prime example of that.

"At GBK we never take ourselves too seriously so humour was always going to play a big role in this campaign – we hope people enjoy the ads, as much as the Rump Burger itself."

Campaign Viral Chart: Airbus shows off planes in this week's most shared ad

Men more likely than women to complain about ads to ASA