"I’m not going to be the person I’m expected to be any more." With this smouldering snarl of defiance, the guy from the Bleu de Chanel commercial announces the start of the silly season. He’s as mad as hell and he’s not going to take it any more. For the rest of us, I’m afraid it’s a parade of mystifying tableaux vivants ending in the words "pour hommes", interspersed with the tinsel-toed advances of our nation’s retailers.

Of course, the silly season is deadly serious for many advertisers, with up to 50 per cent of their business conducted during the Christmas period. Conditioned by the likes of Marks & Spencer and John  Lewis, our expectations and their production budgets are high.

This year, it appears that Saatchi & Saatchi and Bartle Bogle Hegarty are doing most of the heavy lifting, with a long-awaited contribution from Adam & Eve/DDB. Saatchis opens with the controversial Asda spot featuring Mum as the sole source of Christmas creativity and effort. Surely this is based on a focus-group truth rather than a real insight? Any group of women emboldened by free crisps and Pinot Grigio will claim to be overworked and under-acknowledged.

Even if Cinderella Syndrome is a genuine widespread condition, this depiction is just mildly depressing. Never confuse empathy with pathos, my friend. Never. As a single male parent, I don’t find this work sexist but, if I were a married mum, I might feel a tad patronised.

Dads are also found wanting in BBH’s new Barclaycard spot. This must have been in post-production when the Ikea toys campaign broke, and the new work suffers by comparison. Some of the gags and characterisation seem to have been borrowed from Toy Story 3 and, despite meticulous execution, this work lacks the childlike anarchy of the Swedish flat-packer’s effort. Furthermore, the central proposition that dads find it difficult to buy toys for their kids just doesn’t ring true to me. Even Asda might allow men this one area of competence.

Perversely, Visa was the first to harness the Six Degrees of Kevin Bacon meme from the mid-90s in a US television commercial. Saatchis dusts him off for the launch of the modestly named Everything Everywhere. Now, these walk’n’talk presenter-to-camera spots are harder than they seem. Samuel L Jackson does a mean one. So does Robert Carlyle. Bacon doesn’t quite have the chops to maintain the necessary grip on our attention. To be fair, this is largely because he is given too much, too selly to say, including the word "connected" at least five times.

A botoxed old biddy does the to-camera piece for Freesat: "Satellite TV so good you won’t believe it’s free." (Does that sound a bit like an apology to you? As in: "What the fuck do you expect for nothing?") Anyway, the time-shifting point is efficiently made here, but the semiotics are shot to shit. This ad screams sad, desperate and lonely. Is that what you want, Mr Freesat? At Christmas? Is it? Really? Thanks, mate.

A similarly party-pooping vibe is given off by those smug bastards at Waitrose. Just as we’re lifting another glass of eggnog to our puckered lips, Delia and Heston are raising their eyebrows and tutting. "We’re not having a fun ad this year so we can give more to charity," they smarm, as if the public had no idea of media costs and the sort of fat fees demanded by celebrity chefs. Humbug!

Perhaps the best present advertising can give the public at this time is a universal truth well-told. That is precisely what John Lewis delivered last year with its "it is better to give than receive" spot. This year, despite the beautiful production values and The Snowman-style sentiment, we’re back to the prosaic "get your gifts at John Lewis". I’m sure millions of people will enjoy this ad. But they won’t connect with it in quite the same way as its predecessor. 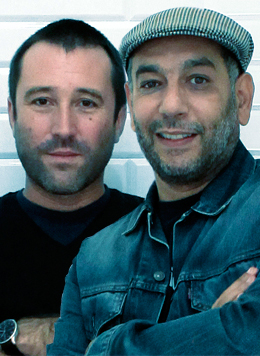 Hello, London. You have no idea how lucky you are to live in a city with such a high level of production. We’re in Paris, but not only. Now, we’re also in Shanghai. We love it. We really do. But advertising-wise, production-wise, it’s a different planet. It just sometimes feels good to dive into a usual British advertising week. Why does London have such a good level of production? Is it because British cinema doesn’t exist? It feels like all the talent works in advertising… talent way too big for advertising. It’s unfair that directors like Ringan Ledwige or Chris Palmer live in London. We hate you for that, but it’s difficult not to respect you.

That said, let’s start with this Waitrose spot. Clever idea. Just wonder whether the tone feels right? The laughs and the little music at the end… We would have preferred to keep it pure, serious and as raw as possible. It’s a pure idea, why spoil it at the end? A simple smile would have been enough. What happened? Did Nigel brainstorm with the creative team to crack the end?

Celebrating mums can easily turn cheesy. But the Asda family looks pretty real. The scenes are well-observed. The mother is touching. The emotion works at the end. The brand is elegantly introduced: "Behind every great Christmas, there is Mum, and behind Mum, there is Asda." It’s just honest about what Christmas is in real life. We enjoyed the way the mother sacrifices herself by sitting on the small brown footstool around the table. It almost made us want to call our mums to apologise for being such a disappointment.

The Barclaycard film captures the sheer scale parents are faced with over the chaos of the decision of that one perfect gift. The poetry of Chris Palmer makes this work. It’s fun, fast and entertaining – a welcome change from the twee, sentimental tone of other Christmas ads. But in reminding how hectic stores can be around Christmas, it might also encourage people to do their shopping online this year rather than go use their cards in stores.

Then… "Best use of snowman" goes to this sweet John Lewis spot. The power of love. God, we miss London sometimes… Romantic story giving life, heart and soul to a snowman and his snowwoman. "Give a little more love this Christmas." It’s naïve, in a good way. We need more naïve ads. Our world is craving for naïvety. Plus, it’s not the easiest genre to crack. So it’s always good to support creative teams who dare to enter this dangerous zone.

Moving on to the Freesat spot. The basis of the idea, "the secret of turning back time", is interesting. But, overall, the execution feels a bit clumsy, trying too hard to be funny, contrived by too many boring details. They used a thick brush where a fine pencil would have been just perfect. Hey, Mr Client, please let your agency work next time! Get a beer, relax, trust them.

"This, Britain, is how Bacon rolls." Oh, EE. After a perfect cameo for Logitech in the US a couple of years ago, made by our friends at Goodby, Silverstein & Partners, Bacon is back as… himself. But, this time, he implores us to "get connected", building on the popular saying that everyone is connected to Kevin Bacon by six degrees or less. We like the literal approach. And Ringan Ledwidge shooting Kevin Bacon – come on, what can we say? Bad acting, shitty direction? London, please… get a cinema industry and stop bothering the whole advertising world with all these talents.