The Conservative Party has been in government for nearly a decade, which hasn't been without difficulty, but thanks to a very impressive general election campaign it has just secured its biggest majority for more than 30 years.

One of the things that unites many famous and successful brands is the presence of a clear objective that is unreasonably difficult to achieve.

Uber endeavours to make transport as reliable as running water; Tesla wants to get everyone around the globe to transition to electric vehicles; Facebook is trying to bring the world closer together.

By forcing through an election without having led the country out of the European Union, the Conservatives set themselves an unreasonably difficult challenge and only a 36-day campaigning period to complete it.

Their ambitious objective was to unite the coalition of people who voted Leave at the 2016 EU referendum under the Conservative Party banner and, in doing so, gain significant numbers of seats.

Achieving this objective required getting voters in constituencies who hadn’t returned a Conservative MP in generations – and in which "Tory" has been a dirty word – to support Boris Johnson.

This steep and narrow path was the only viable route to victory. Were they to fail, there would have been no obvious direction for the next stage of their journey.

However, thanks to a campaign that combined charismatic leadership, clarity, creativity and cunning, the Conservative Party managed to turn Labour’s red heartlands blue and paved its way to a big majority.

The Conservatives’ campaign slogan was one of the greats of recent electoral history.

Focus groups conducted by research company Public First for The Times revealed that "Get Brexit done" was the only slogan that undecided voters could remember.

Labour’s shadow chancellor John McDonnell even parroted the phrase in his BBC interview after the exit poll was announced.

It’s easy to understand why it was so effective. The slogan is a wonderfully simple, colloquial and action-oriented summary of the Conservatives' electoral pitch: we are the only party who are both able and determined to deliver on the referendum result.

While it was single-mindedly focused on the most important issue of the day, it was also broad enough to allow the Conservatives to feature a wide range of messages that were necessary to appeal to different parts of the electorate; once Brexit is done, Johnson relentlessly explained on the campaign trail, all manner of things would become possible – from investment in public services to tax cuts and reduced carbon emissions.

Intertwined with this campaign platform was the personal narrative the party constructed around Johnson; it positioned him as "the punk PM who doesn’t care what it takes to get Brexit done".

This narrative manifested in refusing to follow conventions around what interviews to do, bullish behaviour at debates and partaking in stunts such as riding a digger through a brick wall emblazoned with the word "deadlock".

The party hoped this rebellious spirit would appeal to people who hadn’t voted Conservative before – and they were right.

For those in any doubt of the veracity of this suprising positioning of the Old Etonian leader, note the references to The Clash in the Conservatives' Vogue-style party election broadcast, the occasional homage to the Sex Pistols and the regular deployment of the slightly anarchic, DIY-style art direction of their slogan.

The strategic rigour behind their campaign advertising was tight and the volume and quality of the executions have been impressive.

The Conservatives have found myriad ways to tell us that the country is stuck because of Brexit gridlock, that we are under threat from a potential Jeremy Corbyn-led government and that the quickest, fairest way to move on as a nation is to deliver a Conservative majority hellbent on delivering the referendum result and fixing public services.

While the creativity with which the Tories executed their campaign platform has been strong, there are unanswered questions around their approach to paid media.

Facebook’s political ad data over the seven days up until 9 December show that there’s relatively little to separate the amount spent by Labour, the Liberal Democrats or the Conservatives.

The Conservatives bought a YouTube masthead, which is a considerable investment, but thus far there is no evidence that their sizeable war chest was used to dramatically outspend their opponents in paid media – although, thanks to the lack of political ad regulation in the UK, it is possible that they have done so on digital channels that journalists and watchdogs can’t track.

It seems likely that a number of Conservative-supporting non-party campaign groups invested significant sums on Facebook on Johnson’s behalf in the final days of the campaign.

It must be noted that elements of the Conservative campaign were at best juvenile and at worst deeply destructive of democratic norms; misleading factual claims, duplicitous editing of news footage and dishonest digital practices were consistent themes of Conservative Campaign Headquarters behaviour.

Research by YouGov for The Coalition for Reform in Political Advertising in the week of 2 December showed that more than a third of people agreed with the statement: "Politicians and parties have been less honest than at previous elections."

It has never been more urgent that political parties work together to appoint a political content regulator and agree a new code of campaign conduct.

The Labour Party didn’t succeed in marketing the idea of a Corbyn-led government running a second Brexit referendum, rapidly expanding the public realm and instigating radical changes to levels of taxation.

Its original campaign platform of "Real change" didn’t resonate and Labour changed it halfway through the election to "On your side"; this platform mainly manifested in pledges that would support public services and put money in the pocket of the young, vulnerable and working class.

This change coincided with an uptick in the polls, but it didn’t inspire any level of widespread enthusiasm.

Its advertising was flat and devoid of creativity. There is also evidence from political ad transparency watchdog Who Targets Me that suggests Labour managed to pay roughly double the price the Conservatives paid per thousand impressions on Facebook. 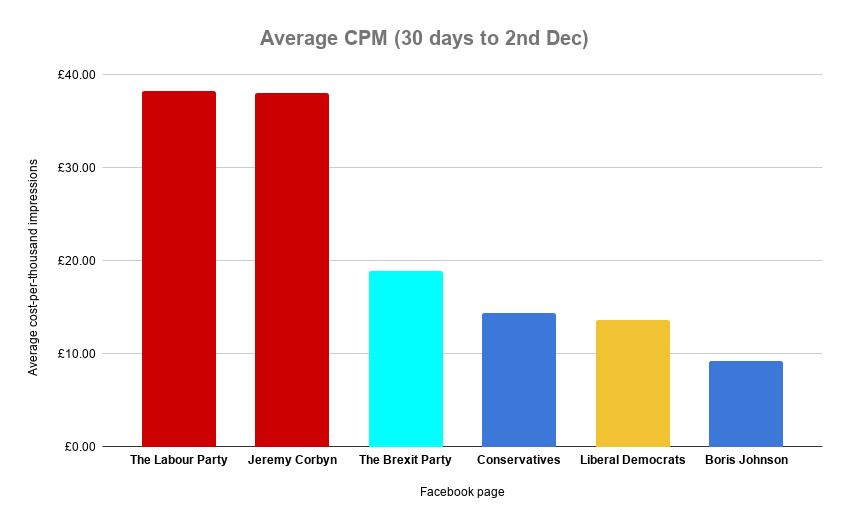 When the election was called, Labour was so far behind the Conservatives on being seen as competent on the most important issue of the day (Brexit), and Johnson out-polled Corbyn on leadership by such a margin, that its only hope (for the third general election in a row) was to bang on about the NHS.

Labour repeatedly attacked Johnson for wanting to sell off the NHS and focus group analysis showed that it cut through, but many found it a spurious accusation.

At the start of the campaign, the Lib Dems were polling around 18%, according to The Guardian’s poll of polls, which put them six points below Labour. However, the promise of "due weight" of coverage on broadcast news, the possibility of detailed scrutiny of Johnson’s deal and Labour’s years on the EU fence made the possibility of a jump in popularity during a Brexit election very possible.

The party’s campaign platform of "Stop Brexit; build a brighter future" was perfectly solid. It followed the same formula as the Conservative Party’s: our solution on Brexit = the way to improve the country.

But as the slogan was only a minor advancement on their 2019 EU election campaign slogan, it felt a little tired at the start of the campaign and the party failed to breathe new life into it.

The level of creativity in their advertising was low. The Lib Dems carried out a huge amount of message testing on Facebook, but then failed to turn the winning options into memorable creative work; it rarely got beyond using text-led graphics saying "Stop Brexit" and accusing the legacy parties of being stuck in the past.

There were very few insightful, withering attacks on the Conservatives’ approach to Brexit or Johnson’s leadership of the country. Without making the country feel like the real battle of ideas on Brexit was between Jo Swinson and Johnson, the Lib Dems' position on revoking Article 50 felt unconvincing and undemocratic.

The lack of excitement and emotional resonance in their campaigning meant that the party failed to connect with the educated, socially liberal audience who would be vital for any Lib Dems electoral breakthrough.

Focus groups carried out by Lord Ashcroft in Lib Dems target seats revealed that some Remainers who had previously supported Labour felt that Swinson seemed "quite right-wing". Most knew that she was a member of the 2010-2015 coalition government and they feared that she would "do a deal behind the scenes" and was "prepared to go into government with the Tories" again.

The perception, and arguably the reality, was that the Lib Dems were arguing for the status quo and their pitch felt uninspiring when sandwiched between two populists promising to take the country in radically different directions.

The Conservative Party’s gains came partly off the back of the demise of the Brexit Party.

Nigel Farage effectively signalled that he was not going to mount a serious campaign when he decided not to stand for election himself and pulled candidates from Conservative-held seats.

This concilitiary body language towards the Conservatives from the self-proclaimed "Bad boy of Brexit" was a key factor in enabling former Labour voters who had supported the Brexit Party at the EU elections earlier in the year to allow themselves to get behind Johnson at a general election.

While the polls predicted a Conservative majority from fairly early on in the campaign, such was the audacity of the approach that few commentators allowed themselves to believe it to be possible.

But the Conservatives have fulfilled their heady ambitions and delivered a stonking majority.

Just as it is no longer ridiculous to imagine our streets being free from petrol-powered cars, it’s also not unreasonable to believe that the electoral map will look very different for many years ahead.