Tesco’s 'Pop to your local if you can' campaign ran across national newspapers. 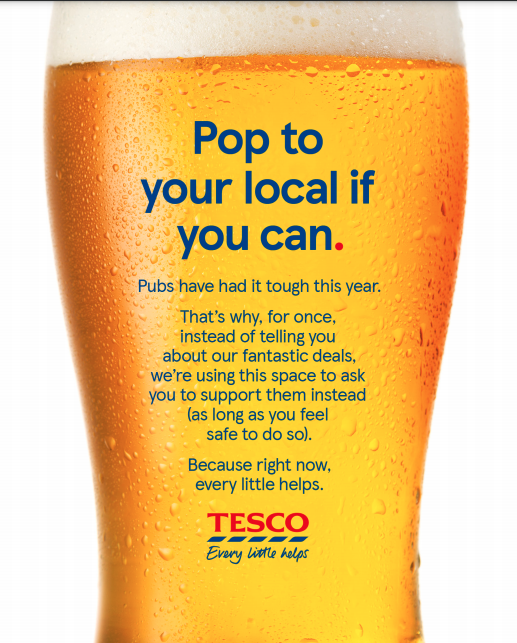 Supermarket giant Tesco has chosen to use its advertising to tell consumers to "give Tesco a miss" and instead visit their local pubs as they reopened yesterday.

Tesco’s “Pop to your local if you can” campaign ran across national newspapers and digital outdoor billboards, as well as on social media.

The ad, created by Bartle Bogle Hegarty London, is written as a call-to-action and finishes with a variant of the familiar Tesco slogan.

It says: “Pubs have had it tough this year. That’s why, for once, instead of telling you about our fantastic deals, we’re using this space to ask you to support them instead (as long as you feel safe to do so). Because right now, every little helps.”

The ad was created by Daniel Seager and Richard Biggs at BBH, and MediaCom planned and bought the media.

The campaign is an implicit recognition that supermarkets' sales have benefitted significantly from pubs and restaurants being closed during Covid-19 lockdowns.

A spokeswoman said: “We're using our adspend to encourage the nation to give Tesco a miss in favour of a visit to the pub. We urge our customers to head to their local for a drink or a bite to eat with friends and family if they can."

Tesco’s profits rose by more than a quarter year on year last October, six months after the Covid-19 lockdowns began in the UK, as grocery demand surged with millions forced to stay at home.

The supermarket, which is the UK’s biggest by market share, spent £81m on advertising in the UK last year (marginally more than in 2019), according to Statista research.