From embracing 'chosen family' to slapping a rainbow on a product, Campaign takes a look at how brands are celebrating Pride.

Pride Month, the annual month-long celebration of the LGBT+ community, is upon us, marking 50 years since the Stonewall uprising.

Much has changed since the 1969 riots in the New York gay bar Stonewall Inn, but the Pride movement continues to fight for equal rights and unity.

And while inclusivity should be at the top of every brand's agenda, every day of the year, Pride Month provides marketers with the opportunity to shout even louder about key issues impacting LGBT+ people and fly the rainbow flag.

From creating meaningful partnerships to the obvious box-ticking tactic of slapping a rainbow on some packaging, Campaign looks at the good, the bad and the lazy attempts to celebrate Pride.

Sip on a ‘Pride colada’ 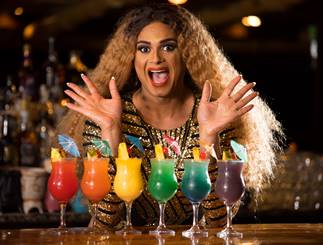 Hilton Hotels & Resorts is serving up the colours of the Pride flag in the form of piña coladas.

The "Pride colada" comes in six of the rainbow-inspired flag colours, but stays true to the classic cocktail’s coconut flavour to highlight we are all the same on the inside, regardless of exterior appearance.

It is available until 1 September and £1 from every drink sold will be donated to its charity partner Stonewall. Cheers to that!

Clothes that say: we are family

Sometimes your family is the one you're born into, sometimes it’s the one you’ve built yourself. Levi’s is celebrating family with its latest collection, "Proud. Together".

The range features T-shirts, jeans, truckers and accessories, all sporting multiple interpretations of Levi's own logo and the Pride rainbow.

All net proceeds from sale of the collection go to OutRight Action International, which works to advance human rights for LGBT+ people globally.

Separately, Levi's is partnering Queer Britain, the national LGBT+ museum, to launch a three-year collaboration that will start with a photography exhibition around "chosen family".

The exhibition will be open for Pride in London. After that, each photograph will be donated to the ever-growing Queer Britain archive.

Dr Martens has adorned a rainbow on its classic boot, with the word "Pride" stamped along the heel.

The uninspired shoe will set you back £130, of which an undisclosed amount will be donated to LGBT+ youth homelessness charity Akt. 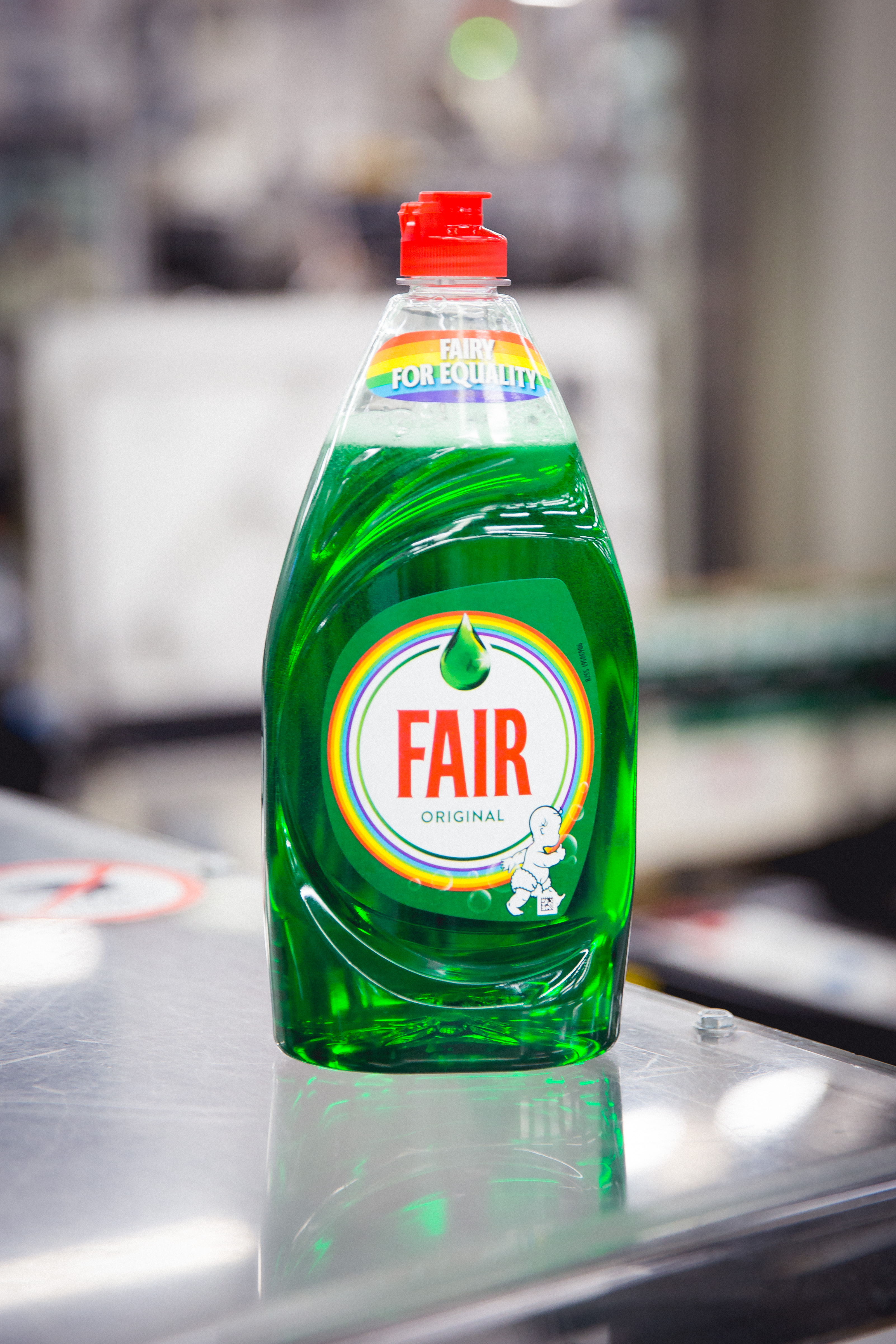 P&G has rebranded its washing-up liquid brand Fairy as Fair in a limited-edition range to coincide with Pride month to highlight the need for a "fair family" for all. It coincides with the brand's own research, The Fair Report, which revealed that a quarter (27%) of British parents think it is fair to treat people differently because of who they love or who loves them.

Although the idea has been recycled from the brand's 2016 International Women’s Day campaign (where the "y" was also dropped from Fairy), the FMCG giant is supporting the latest initiative by donating £50,000 to Akt.

SodaStream is depicting historically set scenes through an LGBT+ lens in its latest campaign.

From miners proudly posing in their rough work attire while kissing to a same-sex couple attending prom, the spot tweaks portraits from the past to represent the true community.

The video, which features transgender woman and face of the 2019 Tel Aviv Pride parade Lila Blilat, aims to send the message that no-one should ever have to hide who they are. 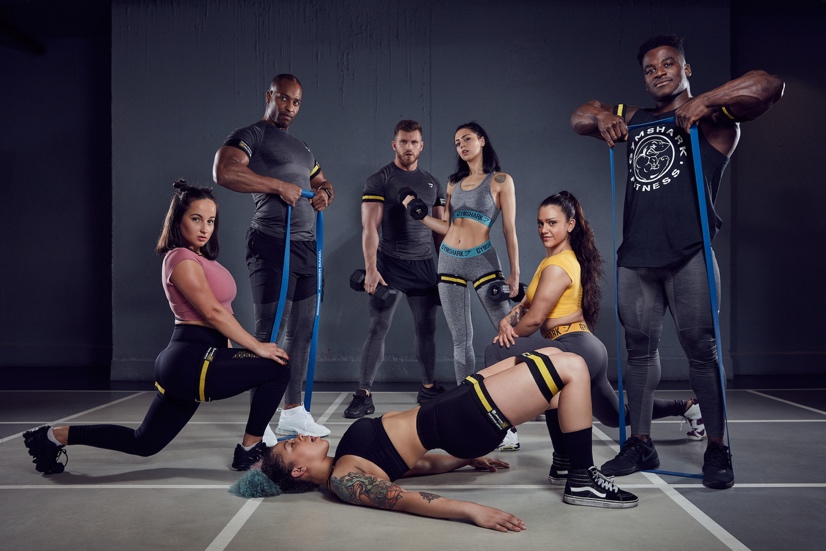 In the run-up to the Pride in London parade on 6 July, Gymbox is introducing a week of "fully inclusive classes" for identifiers of every part of the LGBT+ spectrum to connect, work out and get "parade-ready".

All proceeds of ticket sales are going to Switchboard, the helpline dedicated to ensuring all LGBT+ people are informed and empowered.

Budweiser champions all communities to fly their flags 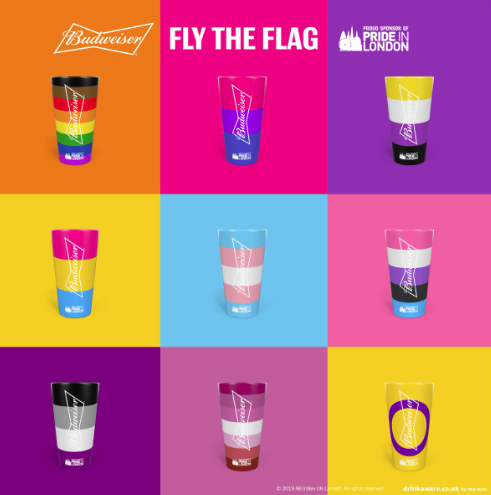 The beer brand is shining a light on every group within the LGBT+ community with a collection of limited-edition cups. Budweiser’s "Fly the flag" campaign aims to highlight all the diverse communities under the Pride umbrella.

As part of the campaign, Budweiser is working with nine diverse charities and is hosting a series of events throughout Pride Month.

As well as the more conventional "stick to selling beer" attacks, Budweiser was hit with some accusations that it was endorsing regressive ideas with the use of the flags, which represent groups including pansexual, asexual and gender-fluid people, in part because some use pink and blue to represent female and male.

One Twitter user, Julie Outrageous‏, wrote: "Gender is a spectrum so coming up with labels for it is like trying to sort all the grains of sand in the Sahara into different categories. That's why the rainbow flag works so well. It's for everyone." 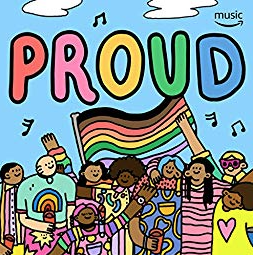 The "Proud playlist" by Amazon Music features new tracks from LGBT+ artists, from King Princess to Sam Smith, and will be updated weekly.

The official music partner of Pride in London has also put together a playlist of established LGBT+ artists, "Sounds of Pride", which includes classics by Diana Ross, Lady Gaga and George Michael.

So, in case you are struggling to put together your own collection of hits to celebrate Pride, here’s the collection exclusively available for Amazon Music customers.

Say it with an H&M slogan tee

H&M has released a capsule collection featuring a range of slogan T-shirts, sportswear-inspired garments and accessories, which celebrate "everybody’s right to love whoever they want".

The uninspired collection includes black tops with capital cities (such as London) printed in rainbow colours, a white cap with a rainbow slapped on it and a hoodie that looks like a unicorn puked all the colours of the rainbow on it (this last one will set you back £60).

So H&M went for a rainbow theme, then.

On a positive note, 10% of the sale price will be donated to the United Nations Free & Equal campaign.

Following the success of their previous capsule collections, Asos and media monitoring organisation Gay and Lesbian Alliance Against Defamation have partnered for a third time.

The inclusive yet stylish #SpiritDay collection, which comprises 50 items (up from 22 in the previous collection), is available in both "plus" and "curve" sizing, as well as unisex products.

Better yet, 100% of all net profits made will go to GLAAD to continue its work of taking a stand against bullying and fighting for acceptance.

Converse steps in the right direction 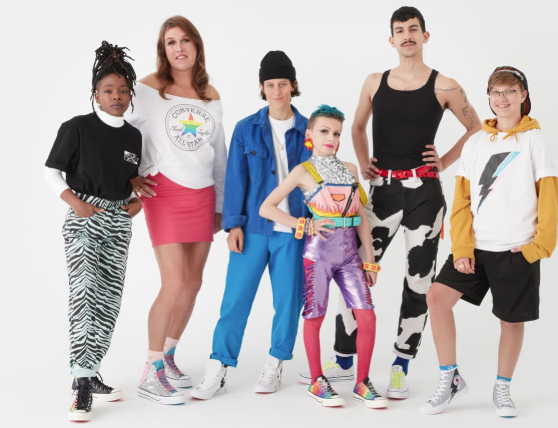 Converse has released a Pride collection every year since 2014 and this year's range features its first trans-flag-inspired Chuck Taylors.

Customers can now finally get their hands on a pair of pastel pink and blue Chucks (with no shortage of glitter), in addition to other designs featuring a rainbow sole and black with multi-coloured lightning bolts.

Proceeds from the collection support various local and global LGBT+ groups, including It Gets Better Project and OUT MetroWest.

This is not just any sandwich, it’s an M&S 'LGBT sandwich' 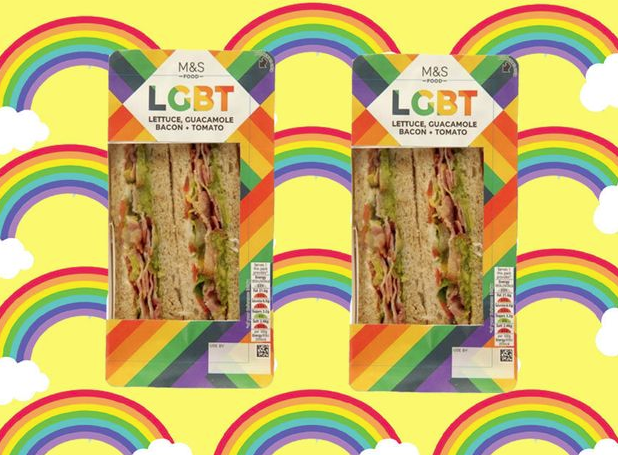 Marks & Spencer, inspired by the letters LGBT, has released a £3 lettuce, guacamole, bacon and tomato sandwich to mark Pride Month.

The BLT-plus-guac sandwich, complete with rainbow packaging and absolutely not inclusive of vegetarians in the community, caused a stir on social media.

One Twitter user, artistic director Aaron Wright, wrote: "Basically equating us to a sandwich? Can't imagine them doing this with other marginalised groups."

On the bottom of the divisive lunchtime item’s packaging, M&S revealed it was donating money to the Albert Kennedy Trust, a charity that supports homeless LGBT+ youth, and the BeLong to Youth Services in Ireland.

To mark Pride, the independent energy provider has adopted an unoriginal rainbow logo.

It is also encouraging its employees to don rainbow attire on 14 June, which it has dubbed "Utilita Pride Day".

Express yourself with Revolution 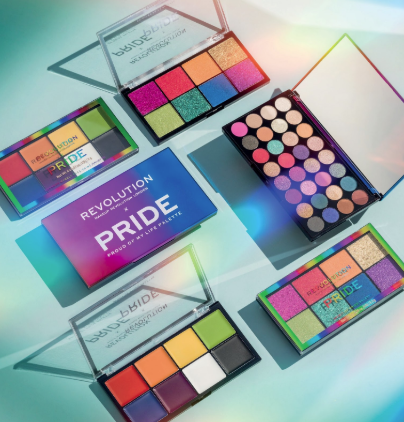 Revolution is encouraging beauty aficionados to unleash their creativity and express themselves with a Pride range. It includes a 32-shade eyeshadow palette, "Proud of my life", which includes bright pops of colour and pressed glitter.

Regardless of product sales, the beauty brand is pledging £25,000 to the Human Dignity Trust to mark the occasion.

The stock photography website has curated a selection of images celebrating diversity.

However, users should note that the revenue generated from this collection will not be donated to Pride.

BBC "Pride of a nation" by BBC Creative