The Google+ global marketing director believes that its latest social-media offering will give it the edge over its longer-established rivals, writes Matthew Chapman.

Marvin Chow's LinkedIn profile captures the swagger of a man who made his name in a leading multiple-country marketing department at Nike before scaling the heights at Google.

'Start-up survivor', 'brand pimp' and 'propaganda minister' are some of the terms the Google+ global marketing director uses to sell himself to the world; he lists one of his specialisms simply as 'wow'. However, when the subject of his profile is broached, Chow laughs it off as 'tongue-in-cheek.'

Google's bosses will hope that his evident talent and enthusiasm for personal marketing can be transferred to his work for the social network. Google is not a company associated with failure; after just 15 years of existence, its annual revenues exceed $50bn, which co-founder Sergey Brin has described - with an understatement that betrays its ambition - as 'not a bad achievement'.

Nevertheless, the average consumer would struggle to identify Google Buzz, Google Friend Connect or Orkut. This litany of names represents Google's previous ventures into social media. Brazil-based Orkut is the only surviving precursor to Google+, the company's latest stab at the platform, which launched in 2011.

Even now, Google+ is yet to achieve anything approaching the awareness of the company's eponymous and ubiquitous search engine. 'If you walked down the street and asked 10 people (about Google+), I don't think you would get very far,' admits Chow, speaking on a flying visit to London.

The technology press has not shied away from slamming Google's performance in social media, and even Chow concedes it has 'clearly had some struggles in the past'. Despite this, he says: 'We believe we have something really special (in Google+).'

Google+ breaks the mould of the traditional 'walled-garden' models used by other networks. Sci-fi aficionados have described it aptly as a 'hive mind' due to the way it acts as a 'social layer' and interconnects all Google's products. Consequently, Google can cross-promote its services such as Gmail and YouTube to fuel the number of people signing up to Google+. Anyone who opens a Gmail account is now automatically signed up to Google+ as well, unless they opt out.

A Wall Street Journal report claims the aggressive user-acquisition strategy is an edict from chief executive Larry Page, who, allegedly, also wanted users to have to sign up to Google+ to read reviews, before he was talked out of it by fellow executives.

In December, Google revealed that 500m people had signed up (or 'upgraded' as the company prefers to term it) to a Google+ account. Of this group, it claims 235m are considered active users who will '+1' apps in the Google Play store or use the Hangouts video-call service in Gmail, which is open to those with a Google+ account. This figure dips to 135m active monthly users when measuring those active only in the 'stream', the equivalent to the Facebook News Feed.

'In some ways, not in our wildest dreams did we think that we would have 135m users at the end of our first year,' says Chow.

Despite a potentially huge audience, Google needs to dispel the perception that its stream is a ghost town, enlivened only by 'tumbleweeds', like the odd post by famous users such as Sir Richard Branson.

Statistics provided by Google would seem to contradict this version of events; they purportedly show increasing activity from daily Google+ users, the time they spend in the stream having risen from nine to 12 minutes a day in the previous three months.

'Clearly we want to drive more engagement and see more healthy active user (numbers),' says Chow. 'We are Google; we strive to be good at a lot of things.' 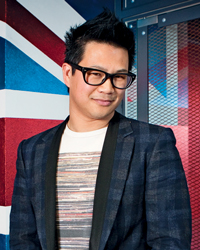 He points out that Google+ is still at 'the early stages of developing the product', currently releasing an average of one major product feature a day - a pace that is 'hard for the consumer to digest'.

Google has a lot of catching up to do on eight-year-old Facebook, which was built on the bedrock of organic growth driven by US college students using the site.

Although a latecomer to the social media stage, Chow argues that Google's omnipresent offering gives it the edge over rivals.

'If we can bring social information in context to where you need it, that is more valuable to you,' he says. 'Our goal has never been to create this single destination where you go to consume social then leave.'

Chow illustrates this point by saying his decision on whether to eat at a high-end restaurant could be influenced by the discovery of a review left by a friend who has given it a bad rating via Google+.

The example is particularly pertinent considering Chow was speaking the day after Mark Zuckerberg announced Facebook's Graph Search function, highlighting how it could be used to search for restaurants his friends had been to in the Palo Alto area.

Although the Facebook and Google+ offerings appear to be on a collision course, Chow is adamant that Google's open-web strategy is the better option.

'We believe that this content should live in multiple areas where it makes sense,' he explains. 'It's not that we won't have a stream of content, but it shouldn't be the only way for you to consume this information.'

The other major difference between Google+ and Facebook is the ad-free nature of the former, which Chow suggests will not change any time soon.

'There is no advertising on Google+ and we don't currently believe in advertising,' he says. 'It is a very disruptive experience when you are trying to have a meaningful conversation or look at a picture of a grandchild.'

Internally at Google, advertising on social-media sites such as Facebook has been dubbed the 'sandwich-board effect', with Chow likening the experience to having a man wearing a sandwich board running in front of someone when they are proposing to their girlfriend.

Instead the focus will be on bringing additional 'social layers' to ads, which it currently does through a social annotation function that shows a user how many people have given a brand a '+1'.

Chow claims social annotations on ads increase click-throughs by an average of 5%-10%, with H&M and Ocado recording 22% and 30% increases respectively.

'Measurement is going to be a very hot topic, which chief marketing officers are really going to want to see from social in 2013, and we are going to bring some really interesting points of view to that,' he says.

Beyond the practicalities of measuring effectiveness, Chow takes a more intuitive approach to marketing and has jokingly claimed in the past that he 'disdains' it.

'The brands that tell great stories about people, products or experiences are successful and I almost don't call that marketing,' says Chow. 'When you look around the world at marketing, that is very rare.'

Chow cites Apple and former employer Nike as among the 'rare' brands to have mastered the art of storytelling.

Google+ is exploiting its flagship Hangouts product to drive its own story. It has used them for everything from 'Ghetto Film School Masterclasses', which connected Precious director Lee Daniels to aspiring filmmakers, to interviews with key figures such as US President Barack Obama.

Other celebrity supporters include David Beckham, who participated in a 45-minute interview with Chow that was broadcast via a Google Hangout.

'We don't pay celebrities; it's a very slippery slope and a firm rule we have,' claims Chow. 'We want people to use the platform because they believe in it.'

Chow is not allowed to disclose the marketing budget behind Google+, or the number of marketers dedicated to it. The secrecy around the number of people who work on its initiatives is one of the idiosyncracies of a company where the mission statement is to 'organise the world's information and make it universally accessible'.

Some might argue that 'Don't be evil', another Google motto, also carries with it a tinge of irony, given the company's unrepentant stance on tax avoidance. While Starbucks, one of the other firms under fire for its low corporation tax contribution, found £10m for the Treasury's coffers, Google chairman Eric Schmidt declared he was 'very proud' of his company's tax structure.

Chow, a 'small-town' boy from New Jersey, says he is 'still learning about the UK', from which Google earns 10% of its revenues. 'For Google, this is my fourth time here. I try to get here every three to six months and meet partners and consumers.'

Google has ambitious plans for the UK, signalled by a recent £1bn investment that will result in it moving from Victoria and Holborn to consolidate its operation in one 2.4-acre site in King's Cross when the complex is completed in 2016.

It was during Chow's time in Korea, where he worked for Nike between 2004 and 2006, that he picked up - from someone he describes as a 'very old-guard' South Korean - the 'minister of propaganda' tag.

Does Chow feel pressured to proselytise people to Google+? 'I don't think it is something where, from the top down, someone is exerting this pressure onto us,' he reflects. 'We create our own pressure because we want to innovate; we want to bring more magic to users.'

135m active monthly users of the 'stream', its equivalent to the Facebook News Feed

Google ran a festive campaign showcasing the Hangouts feature on Google+ with a spot that brought together Aardman Animation characters from Wallace and Gromit and Chicken Run for the first time.

Wallace, Gromit, Shaun the Sheep and Ginger were among the characters shown opening gifts via a Hangout, which allows a multi-person video chat by up to 10 users.

The spot ran online only and followed on from the brand's first TV ad in March. In the latter, actor Benedict Cumberbatch read The Seven Ages of Man, charting the life of an 'everyman' named Tom.

Chow said the tie-up with Aardman was a 'fantastic partnership', adding that Google+ 'will continue to look for those unique opportunities where we have such a strong cultural connection'.

On interviewing David Beckham 'He said he would never leave to go to Paris Saint-Germain.'

The King's Cross turnaround: How a district ditched its bad image and lured in Google

Why an unfocused social-media strategy is a waste of money

Google+: ads create too much of a 'disruptive experience'