With the first major redesign since its launch 15 years ago, Google's AdWords is now touting a mobile-first approach for marketers trying to reach consumers in a multi-device world. Media insiders lauded the changes, but noted they've been a "long time coming".

Google unveiled the new AdWords at the Google Performance Summit taking place in San Francisco. Changes to the platform are part of a year-long project, and a reaction to shift in consumer consumption habits that now sees over half of searches on Google taking place on mobile.

AdWords product management director Paul Feng is leading the redesign endeavour, which incorporates material design, the design language that’s at the core of Google apps like Maps, Search, and Gmail. The company has reportedly said the project it will take up to 18 months to be fully completed.

"We have redesigned AdWords from the ground up and re-thought everything from creatives and bidding to workflow and measurement," said Google's senior VP of ads and commerce Sridhar Ramaswamy in a blog post outlining the changes.

The launch of the revamped platform follows the recently concluded Google I/O conference, where it was announced that Universal App Campaigns will now be available for iOS apps.

In addition upgrades were announced for Firebase, a mobile and web app development platform and 'backend as a service' company, which Google acquired in October 2014.

Firebase is expanding to become a unified app platform for Android, iOS and mobile web development and has launched a new analytics product.

It is also now integrated with AdWords, enabling users to track app installs and report lifetime value to the Firebase Analytics dashboard. Firebase Audiences can be used in AdWords to re-engage specific groups of users.

In-app events can be defined as conversions in AdWords, to automatically optimise ads, including universal app campaigns.

Earlier this year, Google removed right-hand-side ads on desktop to improve the search experience and make it more consistent across devices. This change was a prelude to the introduction of expanded text ads, optimised for the screen sizes of the most popular smartphones. The company claims that based on early testing, some advertisers have reported increases in clickthrough rates of up to 20 percent compared to current text ads. The option is slated to roll out later this year.

In addition, improvements have been made with responsive ads for display, which will be pushed out to the more than 2 million publisher sites and apps currently on the Google Display Network (GDN).

"Simply provide headlines, a description, an image, and a URL and Google will automatically design these beautiful responsive ads," said Ramaswamy.

The company is also extending the reach of GDN remarketing campaigns with access to cross-exchange inventory, which includes more websites and apps around the world.

With this inventory, European airline SAS drove about 20 percent more conversions at a similar CPA for its remarketing campaigns, Google claims.

The company is also adding more control and flexibility to optimize bids on specific devices in the coming months, enabling marketing to set individual bid adjustments for each device type—mobile, desktop and tablet within a single campaign.

"This lets you anchor your base keyword bid to the device most valuable to your business and then set bid adjustments for each of the other devices," said Ramaswamy. "You will also have a wider range to adjust bids, up to +900 percent." According to Google, nearly one third of all mobile searches are related to location, and the company is introducing new local search ads across Google.com and Google Maps.

Advertisers using location extensions will be able to prominently showcase their business locations when consumers search for things like "shoe store" or "car repair near me".

The company is currently experimenting with a variety of ad formats on Maps that make it easier for users to find businesses as they navigate around. For example, Maps users may start to see promoted pins for nearby coffee shops, gas stations or lunch spots along their driving route.

Local business pages will also be getting a brand new look, to encourage consumers to explore the store before they even arrive, with new features such as special offers and the ability to browse product inventory.

This will tie in with existing "Store Visits" metric in Estimated Total Conversions (ETC), which AdWords launched in late 2014. The company claims that since launch, advertisers have measured more than 1 billion store visits globally.

Businesses across a variety of industries around the world are using insights from AdWords store visits to measure the impact online ads have on offline activity.

Google shared that Nissan UK discovered that 6 percent of mobile ad clicks result in a trip to a dealership, delivering an estimated 25 times return on investment. 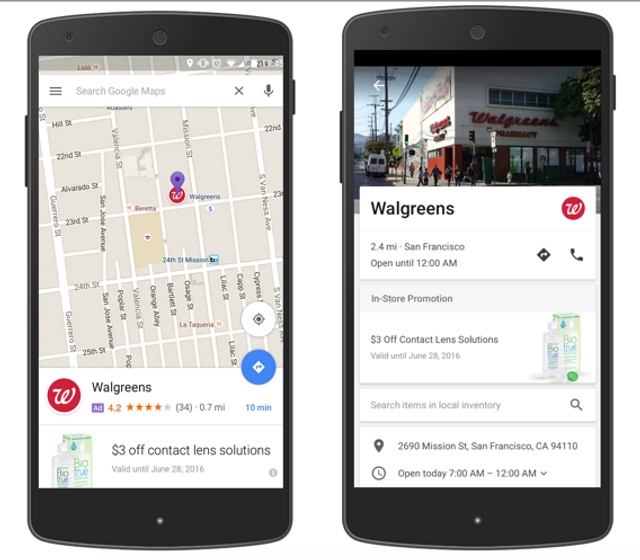 The mobile-first improvements are thought to be a welcome move for Asia-Pacific markets, where according to ComScore data, smartphone ownership in the region averages 85 percent or higher, compared to 79 percent in the US.

Pedro Cordero, head of performance for Mindshare Asia Pacific, said the agency was keen on the announcements coming out of the Performance Summit, as the APAC digital scene has already transformed in the last three years with most mobile performance indicators surpassing desktop devices.

"This is instigating new ways of targeting, and exposing ads to mobile users, so we are very excited to see Google taking steps in that direction," he added.

"In digital developing markets such as Indonesia, Malaysia and Thailand, where users’ only connection to the internet is via their smartphone, this will allow advertisers new opportunities to reach new consumers and educate them on not only the product but also the brand message," he said.

Hui added that the new AdWords advancements would allow for better-targeted media opportunities and placements.

"At the end of the day, creative, messaging and the environment matters," he told Campaign Asia-Pacific. "These moves from AdWords are further recognition of the importance of optimising your messaging for the mobile state of mind. In Asia, where mobile penetration continues to grow, brands understand the importance of adopting a mobile-first approach."

Industry practitioners surveyed by Campaign Asia-Pacific all agreed that the new AdWords should be beneficial to marketers in the region.

Jacob Teo, head of digital with IPG Mediabrands Singapore, said that there is a need for more robust and scalable advertising solutions centred on the mobile device.

"These improvements are naturally welcomed and may be a critical step into attracting a more diverse set of advertisers looking to address a myriad of business objective that can range from brand lift right down to acquisition via mobile," he said.

Hareesh Sthanumoorthy, regional senior communications manager at IPG Mediabrands Singapore, noted that the new developments should be viewed across various markets, where by the digital space is in different phases of life cycle.

"To come out with one single solution hence takes enormous knowledge of market and user nuances and the new developments from Google should be welcomed," he added. "I see it as a more evolving setup, and new extensions should be expected as we see more advertisers leverage this."

Sthanumoorthy noted that the enhancements would ensure better use of data and hence better audience understanding and targeting, which is a key challenge in the mobile space.

Teo noted that with the launch of Allo, Google’s new messaging app, there will be opportunities to commoditise space and include more social and native formats into AdWords.

Hui said that he would like to see how the new features in AdWords would lead to better predictive targeting methods.

"What always interested me is when I look up a product on Amazon, I also see what people are buying who purchased the same product as me," he added.

Looking beyond mobile-first, Hui said the next phase will be the capability to follow consumers across devices, connecting mobile beyond the PC with all other connected devices.

He added that if mobile is the first touchpoint of a search inquiry, following devices that the consumer is connected with allows for a search result (text and copies only), while retargeting can be in the form of video (connected TV), engagement elements (connected gaming consoles) and personal reminders (such as wearable devices).

Cordero said another area of interest is Google’s plans around business data, which he called "thrilling", as the agency’s adaptive principles are founded on making business data work for clients.

"Will Google be up to the challenge?" he asked. There’s only one way to know…"

According to figures provided by the search-engine giant, in 2015 its search and advertising tools drove US$165 billion of economic activity for more than 1 million businesses, website publishers, and nonprofits in the United States alone.

A version of this article originally appeared on Campaign Asia-Pacific.