Only a few years ago, people were afraid to talk about cancer. It was "the C word", less a diagnosis than a death sentence, for which treatment was often assumed to be worse than the illness itself.

Then, gradually, things started to change. Increases in research funding, breakthroughs in treatment and improvements in clinical practice started to pay off: more people were surviving cancer. But not enough of them.

England still lagged behind comparable Western European countries. And some of our most vulnerable citizens, people with less money and lower levels of education, were doing worst. The Government’s ambition, set out in ‘Improving Outcomes: A Strategy for Cancer (January 2011)’, was to save an additional 5,000 lives per year by 2014/2015.

Research jointly commissioned by my team, then housed within the Department of Health, and Cancer Research UK, revealed that many of these people were unaware of the early signs and symptoms of the most common cancers. Worse, when people did know, and spot, the symptoms, they put off going to see the doctor. This delay could be fatal.

The NHS is there for everyone, but it cannot treat people if they will not tell us they are ill. We needed to change the way people behaved.

Our assumption was that people delayed because they didn't want to be told about their cancer: why know, if you don't believe anything can be done? While there was some truth in this, our research revealed some more prosaic explanations: some people were embarrassed to talk about cancer symptoms (blood in pee, looser poo, bloating), some were afraid that they would be blamed for their illness ("of course you've got cancer, you're a smoker!"), others, showing the reverence for the NHS that is so peculiarly British, were afraid of "bothering the doctor" with something that might turn out to be trivial, and some simply did not  appreciate the potential seriousness of their condition.

Our solution was straightforward. In each ad, an NHS doctor describes symptoms in plain language, reassures that this might be nothing to worry about but, if it is cancer, early detection makes it more treatable and invites people to come in with the words "tell your doctor". It is a simple formula of educating, hope and entitlement: I won't be cross, I won't nag you, I won't  think you are wasting my time , but I might help save your life.

The approach is not without its risks. Would a tidal wave of 'worried well' descend upon GP surgeries the day after the advertising broke?

The approach is not without its risks. We were proposing to use mass media to encourage people with coughs or heartburn to go and see their doctor. How many people had these symptoms? Would the campaign cause panic or unnecessary distress? Would a tidal wave of 'worried well' descend upon GP surgeries the day after the advertising broke?

The answer was to test, learn and refine, and, above all, to follow the evidence. We started with a single cancer, in a small area.

We engaged with the local GPs, pharmacists, hospitals and cancer networks, so everyone was prepared. We put in place rigorous measures to track people's progress through the system. Once we knew the impact on demand and cut through of messages with our target audience, we were able to roll out to one TV region, and then nationally.

We launched the bowel cancer campaign nationally in 2011 and one for lung cancer in 2012.  Our tracking showed increases in symptom awareness; GP data recorded significant but manageable increases in patients; in turn, the GPs referred more people for testing, for example, following the bowel campaign we saw a 29.3% increase in attendances to general practice (a measure of behaviour change) amongst patients over 50 with the campaign-related symptoms. 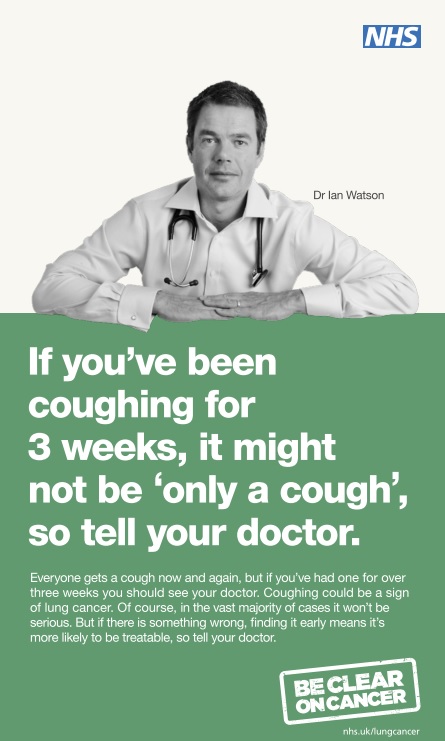 And, an increase of approximately 30% in two week wait referrals for suspected lung cancer in the campaign months, compared with the same period in the previous year, and with the bulk of additional referrals in the over 50s – our core target audience.

But were any cancers being detected and any lives being saved? Diagnosing and treating cancer takes time. It seemed to take forever for outcomes to come through. I began to envy fellow marketers working in retail or FMCG, with their dashboards of data, updated in real time.

But then there it was: the number of people diagnosed with lung cancer during the campaign period was 8,335 - just over 9% higher than the 7,639 in the same period in 2011. And around 400 more patients had their lung cancer picked up at an earlier stage. Surgery, which improves the chances of surviving the disease, was offered to 300 more patients than in 2011, 300 people who would previously may have died but are still with us a year later

Public Health England now has campaigns running on seven different cancers, with no evidence of wear-out and is looking at adapting the model for other conditions.

It seemed to take forever for outcomes to come through. I began to envy fellow marketers working in retail or FMCG, with their dashboards of data, updated in real time.

We have expanded beyond advertising and PR to media partnerships, digital communications, direct mail, face-to-face events in football grounds and shopping centres, outreach to black and minority ethnic groups through faith leaders and accessible materials for people with hearing or sight impairments.

It is too early to be able to assess progress against the ambition to save an additional 5,000 lives per year by 2014/15. However, we do know that cancer survival estimates and mortality rates continue to improve and, for the first time, have the evidence to show the real impact of our campaigns. With our budgets confirmed for 2014-15 we will roll-out a further three national campaigns and continue our efforts to help more people live longer, healthier lives.

'One wrong word and you lose them': the perils of marketing to mature consumers