Lack of verification, limited measurement and unfamiliarity with concept of brand safety are contributing to problem, Group M finds.

More than 80% of the world’s advertising fraud originates in China, according to Group M, which has valued the risk of global fraudulent advertising at $22.4bn.

There is an estimated $18.7bn of fraudulent inventory in China, representing 83.4% of total ad fraud globally, according to Group M’s estimates, which collated data from DoubleVerify, Integral Ad Science (non-China), RTB Asia, AdMaster and AdBug (China). 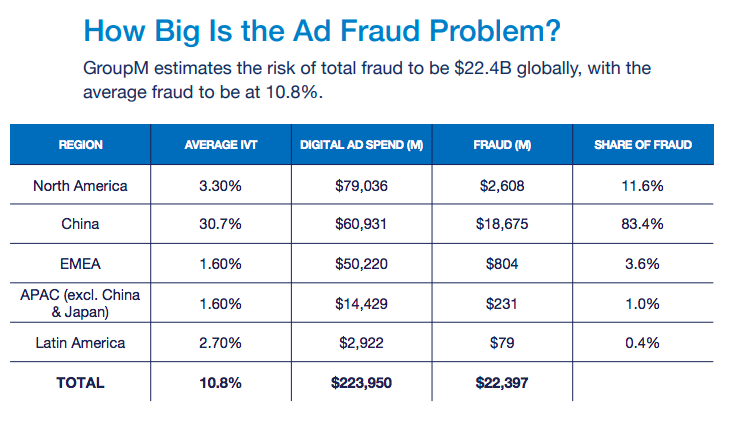 On a global level, fraudulent inventory represents 10.8% of total digital adspend, but this number rises to 30.7% in China.

This vastly outpaces the next highest market, the US, where 3.4% of the country’s total digital spend is estimated to be fraudulent. 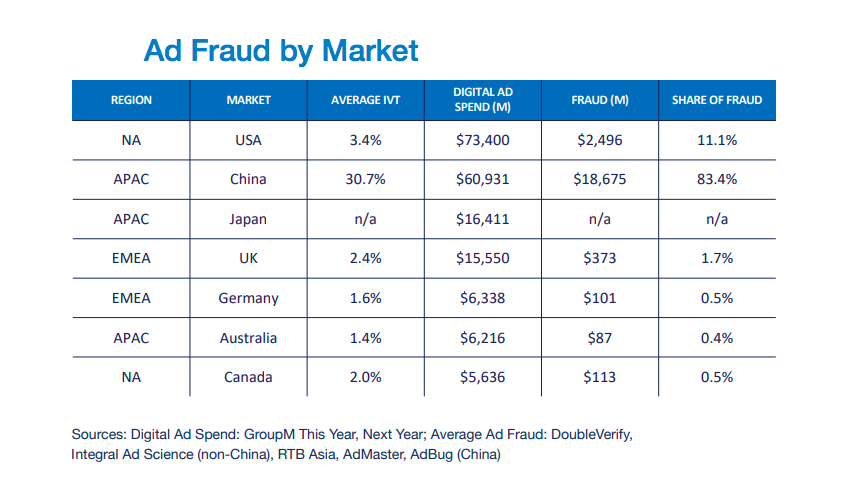 Since measurement standards are not yet widespread in China, this presents challenges in benchmarking any areas of risk and determining with certainty if brands appeared in a fraudulent environment, the agency said in its report.

Overall, the total cost of fraud is 3.8% of the forecast $591bn global advertising spend in 2019, according to Group M’s June forecast.

The agency cited several market-specific challenges that may be contributing to China’s fraud problem, including:

In addition, the "walled" nature of the Chinese internet – whereby three main players control the majority of online media – means it theoretically is not as complex for the industry to adopt one open-source SDK for mobile. Given that mobile accounts for 80% of the digital spending, viewability and IVT measurement will be "significantly increased and improved" if this were to happen, the agency said.

Excluding China, Group M estimates fraud to be worth $3.7bn, or 1.8% of total digital adspend. Several developed Western markets (the UK, US and Canada) have higher levels of ad fraud than the global benchmark, with the US contributing 65% of the total estimated fraud.

These markets are more open to fraud than Asia-Pacific and Latin America, because there is a higher value of adspend, a higher volume of inventory traded programmatically and a greater legacy of desktop display advertising, which is more accessible for bots.

Asia-Pacific has a higher level of mobile app and video advertising. The majority (54%) of fraud seen in mobile apps is classified as app fraud. App fraud consists of ad impression fraud or invalid traffic practices such as misrepresentation, laundering and hidden ads.

This report follows the creation of the Global Alliance for Responsible Media announced at Cannes this year, in the industry’s newest attempt to moderate content across platforms. Group M is a founding member of the alliance.

The Essence of media: people, data and automation together

The future of advertising could be staring you in the face

More than half of location-targeted adspend 'wasted'

Facebook launches 'first of its kind' lawsuit over ad fraud

Unilever: we're 'miles ahead of the pack' on tackling ad fraud

Two-thirds of top UK brands' ads have safety issues, with ecommerce most at risk