Group M has revised its 2017 UK advertising growth forecast down to 4.1% from 7%

A contributing factor is a more conservative outlook on pure-play internet growth which the media group has downgraded from the 15% estimated in November to 11%.

This is partly due to the brand safety concerns that prompted some large advertisers to pause investments on unmoderated user-generated platforms.

In February, The Times found that YouTube was running ads against extremist video content. This led to brands such as Jaguar Land Rover, Dropbox, Sandals, the V&A Museum and Marie Curie to suspend, or partly suspend, online advertising while the brands investigated the problem.

Then again this month, political ads in the general election campaign were found to be running against extremist YouTube videos, leading to the Conservatives, Liberal Democrats and Labour parties to pull their ads.

Google has since announced that it will take firmer steps to identify and take down extremist videos.

Group M's forecast follows Zenith's warning earlier this week that UK adspend growth would plummet to 0.9% this year, down from 9.6% in 2016.

Another reason for Group M’s predicted fall in ad investment growth is a generalised drop in TV investment by several of the medium’s largest categories.

This has prompted Group M to reduce its TV investment forecast from flat to -3% this year.

While online advertisers are big and growing supporters of TV, they are not enough to offset falling investment from more traditional categories such as food, finance, cosmetics and retail, the report said.

Overall, Group M predicts ad revenue to the traditional media will contract 4% in 2017, then stabilise in 2018.

Stabilisation does, however, depend on traditional media owners better justifying their premium prices to an agency/advertiser audience, the report warned.

"A continuing challenge in TV is the accelerating loss of the 16-24 year-old audience. TV has always been an older-skewing medium, but the loss of younger, 'lighter' viewers – or at least their escape from TV's measurement domain – makes TV’s measured audiences less varied," it said.

Group M predicts that this year will yield 59 billion impressions from the 16-24 year-old category – a 10% drop since 2016 and the lowest volume since the arrival of Sky Digital in 1998.

"We came into the year predicting zero revenue growth for TV, and now we are at -3%, a dramatic change compared to TV’s outstanding performance of 10% growth in 2015," Adam Smith, futures director at Group M said.

Nevertheless, digital video has "not yet knocked off TV’s crown" as the best-value cost per impression medium, he continued.

"We think TV's present pressures are more cyclical, which is typical behaviour in this sector and reflects the economic cycle, rather than structural issues," Smith said.

Despite these factors, the UK will still see healthy, if slow, growth for the eighth year in a row.

"The nation will remain one of the fastest-growing media markets in 2017 with a 4.1% increase in spending taking the industry to predicted investment of £18.6bn," the report said.

"We had previously discounted Brexit as a drag on the economy, but the recent UK general election has magnified rather than reduced uncertainty," Smith said. "This is not helpful for growth when consumers and public finances are already under stress, and corporate investment subdued."

GroupM’s first forecast for 2018 is for total UK media investment growth of 4.5%.

Pureplay digital is expected to gain two points of market share, rising to 58%.

GroupM’s forecasted distribution of advertising investment growth across media formats is detailed below: 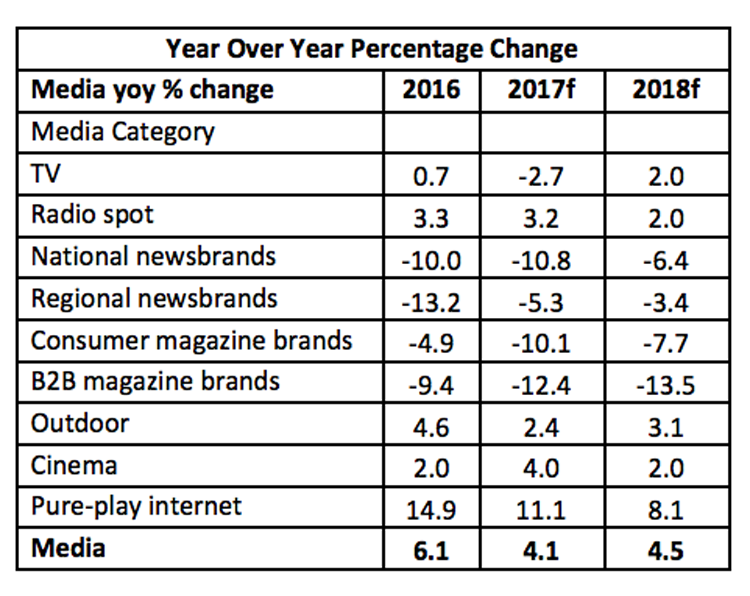 "Despite the challenging dynamics in economic and political arenas, our advertising forecast demonstrates the fortitude of the UK advertising market," Nick Theakstone, chief executive of Group M UK, said. "Sustained investment growth and advertisers’ embrace of automating technologies show the optimism and confidence marketers have for reaching the UK consumer digitally."

Stop predicting the death of anything: no media is a write-off, it's all opportunity

UK adspend growth to plummet to below 1%

TV adspend growth stalls and forecast to shrink in 2017

TV adspend forecast to fall in 2017