The UK market will 'only' shrink by 4.4% this year, the WPP agency group says, having witnessed a dramatic reversal in performance this year for online display advertising.

The UK advertising market will shrink by significantly less than previously thought, WPP’s Group M has forecast, in a remarkably more optimistic end-of-year assessment of the industry’s fortunes.

The UK’s largest media-buying group says the ad market will shrink by 4.4% this year to £21bn – far less than the 12.5% slump that the same Group M was predicting in June, three months after the first Covid-19 social distancing measures were announced.

That eight-percentage point difference represents nearly £2bn in media spend and the improved outlook is driven largely by a better-than-expected performance of online display advertising. Display was forecast in June to shrink by 12.5% this year, but is now expected to grow by 7.5% to £6bn in 2020.

Overall, what Group M calls “pure-play digital channels” will grow by 4.9% this year (its June forecast predicted a 7.8% fall). This does not include digital spend associated with offline channels, such as video-on-demand, which is counted within “TV” spend. 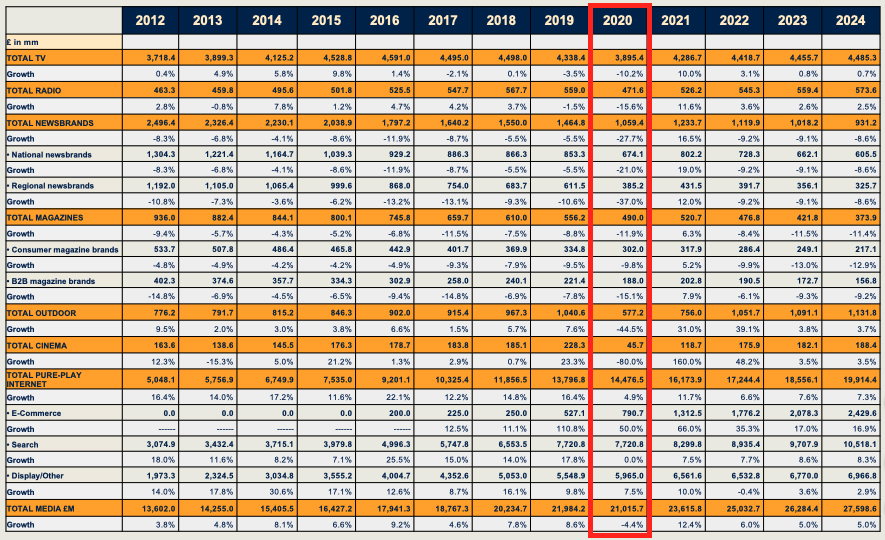 However, Group M warned: “While this year’s gains look strong in comparison to the rest of the industry, it reflects significant deceleration versus prior years.”

As well as small businesses being able to take advantage of tools and ad inventory on Facebook and Google, Group M suggested that US-based digital media companies and performance/direct-to-consumer marketers were driving online spend growth.

“When companies such as Amazon – now the world’s largest marketer in addition to the third largest seller of advertising – expand their marketing abroad, internationalisation of even a small share of their budgets to countries such as the UK can contribute to outsized growth,” the report added.

However, it does not think larger brands rooted in the physical word are growing digital budgets at anywhere near the average rates given in the report.

Ecommerce media spend, meanwhile, will continue to experience “rapid” growth, Group M says, rising by about 50% this year and then another 66% next year. It reckons ecommerce spend in the UK will hit £2.4bn in media owner ad revenue by 2024 – bigger than radio, newsbrands and magazines combined.

TV spend has returned “much more quickly than anticipated” in the second half of 2020, Group M said, thanks to advertisers adhering to “use it or lose it” approaches to maintain the same level of marketing budget in 2021. There has also been strong spend from FMCG companies and essential retail during the pandemic.

Outdoor and cinema, however, have been marked down even further by Group M’s latest forecast, as both sectors were hardest hit by the pandemic and social distancing restrictions.

Cinema, which has suffered badly since movie theatres were forced to close since March and have mostly remained shut ever since, is due to slump by 80% to just £45.7m this year. Group M expects cinema to bounce back to with 160% growth in 2021 as movie studios launch a backlog of big-budget releases, although that would still only bring cinema back to 52% of pre-pandemic adspend.

Out of home, meanwhile, is set to shrink by 45% this year to £577.2m – worse than the 35% fall Group M previously estimated. While “early-returning” categories such as ecommerce platforms and fast-food brands, as well as government public messaging, have mitigated the decline, social distancing has had a crippling effect on the sector. It is expected to expand by 31% next year, boosted by a growth in digital inventory and a return of advertiser demand, assuming a vaccine is widely distributed by the middle of 2021. 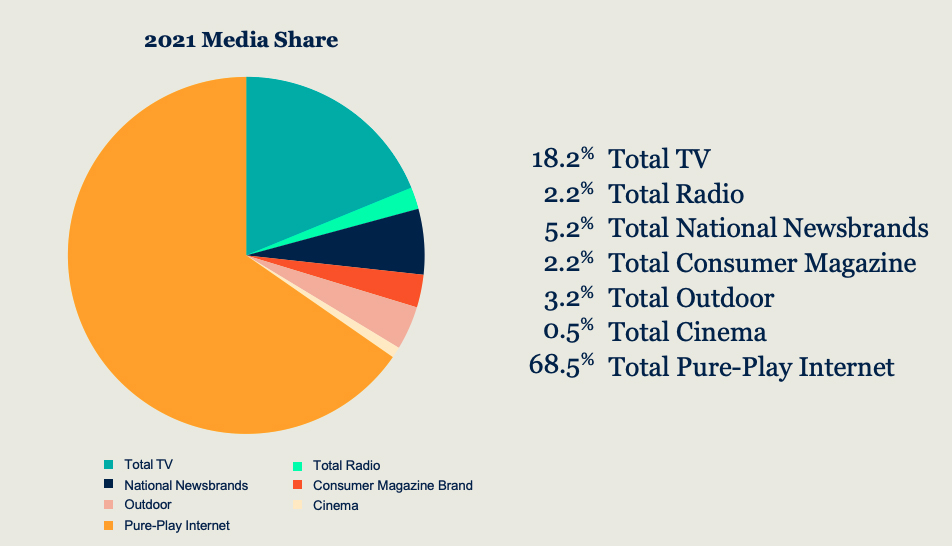 For next year, Group M warned that Brexit uncertainty still weighs on the British economy, but said its impact would be limited to a shift in spending away from the first quarter, rather than meaningful full-year cuts. Its forecast of 12.4% growth for 2021 is fractionally smaller than its previous forecast in the summer, while 2022 and beyond should see a return to growth in line with pre-pandemic activity of between 6% and 5%. 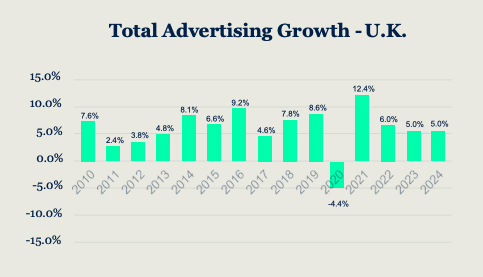 Group M, the media-buying arm of WPP, controls about $63bn (£47bn) in global adspend for brands such as Google, Nike, Procter & Gamble and Unilever and has close to 35,000 staff.