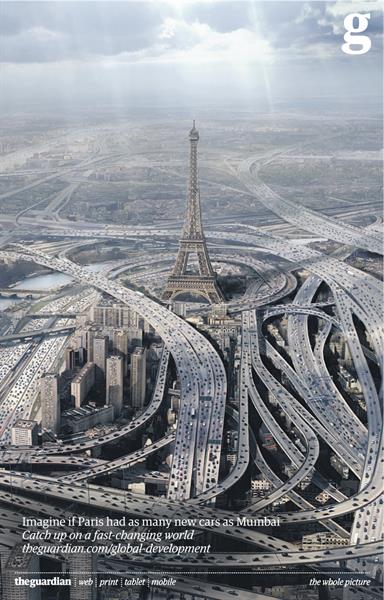 Bartle Bogle Hegarty has created a print and online campaign to promote The Guardian’s Global Development site. The work uses altered images of first-world landmarks to show the pace of change in developing regions. One execution features an image of skyscrapers crowding England’s coastline with the message: "Imagine if London were growing as fast as Lagos." Another shows what Sydney’s harbour would look like if it were as busy as Shanghai’s. The ads were written by Raphael Basckin, art directed by Shelley Smoller and illustrated by Jean-Marie Vives.

Adidas "Run to reconnect" by TBWA\London

The Guardian "own your weekend or someone else will" by BBH

The Guardian/The Observer "what a weekend" by Bartle Bogle Hegarty

The Guardian "do something" by Bartle Bogle Hegarty

The Guardian "one woman, a nation divided" by BBH

Guardian News & Media "own the weekend" by BBH

The Guardian 'The Three Little Pigs' by BBH

Private View: All hell may break loose (with Chaka Sobhani and Darren Bailes)

The Guardian "Hope is power" by Uncommon

The Guardian "Today in Focus" by Oliver