The Guardian has unveiled its biggest major ad campaign in seven years and the debut work by Uncommon Creative Studio since its appointment earlier this year, with a brand platform introducing the slogan: "Hope is power."

The global campaign, which was created by Uncommon along with Guardian News & Media's marketing and editorial teams, is designed to restate the publisher's purpose, build brand affinity among readers and encourage them to subscribe and support its journalism.

It goes live today (23 September), with the main spot breaking at 6.30pm during the ITV Evening News. The ad will also run during Channel 4's The Great British Bake Off on Tuesday and Grand Designs the following day. It will also be aired in cinemas and across video-on-demand on ITV, Channel 4 and Sky, running for five weeks.

The 60-second film opens in a darkened, unfurnished room. Sirens and sounds of protest can be heard from outside. A butterfly flies towards a window and makes increasingly frenetic attempts to escape, bashing itself against the glass as a cover of Anaïs Mitchell's Nothing Changes plays, with the audio pointedly tinny.

"Why the struggle, why the strain, why make trouble, why makes scenes," the voice sings.

As the butterfly's struggles become seemingly more futile, the refrain plays: "Nothing changes, nothing changes…" The glass then smashes and the butterfly flies free into the sunlight. "Change is possible," the on-screen copy reads. "Hope is power."

The ad, which is The Guardian's first major brand-led campaign since 2012's award-winning "Three little pigs", is being backed by outdoor, social media and audio activity, as well as via the newspaper's owns channels, across global markets including the UK, US, Australia. 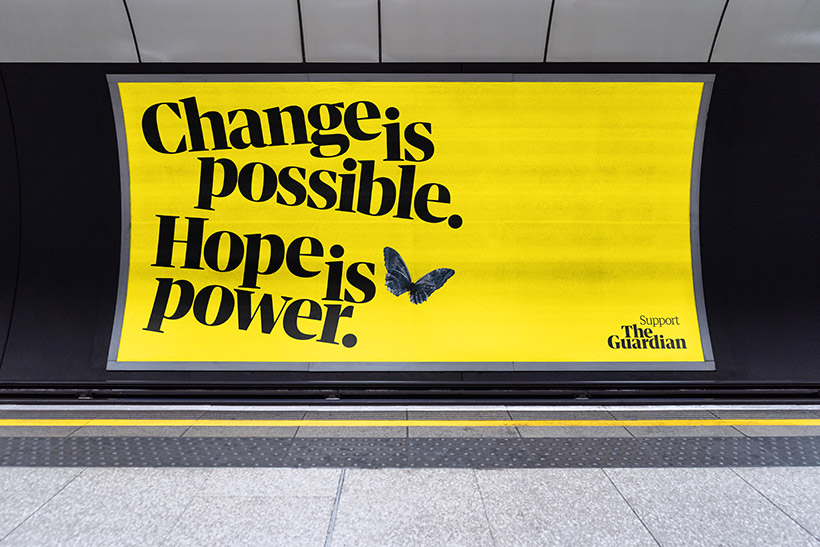 The film was directed by The Theory of Everything director James Marsh through Pulse Films. Media was planned and bought by PHD.

Speaking to Campaign, The Guardian marketing director Sonia Sudhakar explained that the work is inspired by editor-in-chief Katharine Viner, who in November 2017 published an essay entitled "A mission for journalism in a time of crisis". "So we translated those editorial values and purpose into the campaign," Sudhakar said.

"It's not an awareness campaign; we're calling it an affinity campaign to inspire support and [reinforce] what The Guardian stands for today. It's very much a collective message about standing with our readers."

With one million subscribers, The Guardian has set itself an ambitious target: to attract another million by 2022.

The goal of pulling in that "next million will be much harder", Sudhakar admitted, but added that "our global reach is huge, so there's still a lot of potential to convert supporters" – those who read The Guardian's content free online but who are not paying subscribers.

"The campaign shows reasons to be hopeful, but frames it in a way that's not just blind optimism," she said. "This is in Katharine's purpose – to use clarity and imagination to drive hope. We're looking for imaginative solutions to these problems, but not just close our eyes and hope for the best."

Sudhakar said that the initial message of "Hope is power" would set the scene and establish a platform for ongoing marketing communications, as opposed to the publisher's last brand push, "Three little pigs", which was a one-off.

Asked how long the platform would continue, she said: "For as long as it feels, it's the message that the reader needs to feel and we all need to feel. It feels right now; if it's not right in 2022 then, of course, we'll revise it."

Earlier this month, the media group announced that it had accrued one million subscribers on its main YouTube channel, with two million across all of its channels, which also include Guardian News (527,000), Guardian Football (134,000) and Owen Jones (129,000).

It said that its YouTube growth has resulted in double the number of video views and 160% subscriber growth.

In August, Guardian Media Group announced that it had brought in 80% of its ad revenues from digital in the past financial year, helping to offset print decline.

David Pemsel, chief executive of Guardian Media Group, will be speaking at the Campaign Publishing Summit in December.

Will The Athletic give traditional sports titles a run for their money?