Guildford Borough Council has approved an application proposed by organisers of Guilfest for the event to return to Stoke Park this summer.

The decision was announced yesterday (15 January) as part of a press briefing. It comes two years after Scotty Events, the organiser of the event, went into liquidation, which the company said was the result of poor ticket sales.

Guilfest 2014 is subject to organisers Trowfest (run by former Scotty Events head Tony Scott) meeting a number of conditions. These include the payment of a financial bond by the end of April to cover any damage or reinstatement costs.

Other criteria include Trowfest being solely responsible for ticket sales; payment for the hire of Stoke Park to be made in February, March and May; and Trowfest’s proposals and event management plan to meet the requirements of Surrey Police, Surrey Fire and Rescue, NHS, the council's licensing and building control teams and the event organiser, as well as licensing conditions.

Scott told Event he was pleased with the decision: "After Scotty Events went into liquidation in 2012, people asked us what was happening with Guilfest. We were inundated with phone calls and in September 2013 members of the public started a petition to bring back the event.

"Before we knew it the petition had gained 5,000 signatures, so we took this to Guildford Borough Council to highlight how much interest there was around the event. We then put in an application last October to run the festival in 2014 and presented a film about the event at a full council meeting." 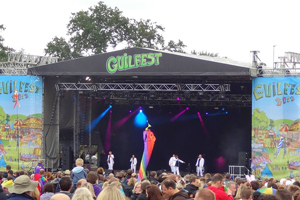 He added since the application was made the Trowfest team has been through a rigorous process and Guildford Borough Council has asked the company to present business and event management plans for this year’s event.

"Since the application was approved yesterday, we are confident we can meet the conditions proposed by the council and put on Guilfest 2014," Scott said.

Scott highlighted Guilfest 2012 was affected not just by bad weather, but predominantly the Olympic Games in London. "The Games probably affected our ticket sales by about 15-20%. Big, sell-out events like Glastonbury were immune to the Olympics. But general festivals and events like Guilfest were impacted."

Planning is underway for the 2014 festival, which will be a three-day event with camping and the ability to host 20,000 people each day. Dates and music acts have yet to be confirmed.

"We have ideas for this year’s festival and as a team we are putting our heads together," Scott said. "One idea we have had is that the event could be set out like a beach resort, a bit like a surfers beach."

Matt Furniss, lead councillor for environment, said: "We recognise that Guilfest is a popular family event. It supports local musicians and attracts thousands of visitors to the town. We are pleased to accept the proposal for Guilfest 2014 and continue our support for live music in the borough.

"Before we could make a decision on the application, we took steps to protect local council tax payers and public assets from potential event costs or damage. We put conditions in place for Guilfest 2014 following the previous financial difficulties experienced by the event operators. If Trowfest does not meet these conditions, the event will not go ahead."

A Guildford Borough Council spokesperson said a second application had been submitted for an event in Stoke Park this summer, but could not disclose whether it was Live Nation.