It was a great 2015 for BBDO New York and Leo Burnett Toronto. The UK can also celebrate a strong performance, Donald Gunn writes.

The latest edition of The Gunn Report – the global index of creative excellence in advertising – has just been released, encapsulating the overall performance of the advertising industry in the year January to December 2015 based on the results of 45 global, regional and national creative awards.

And it is great news for the UK, which retains its place as the second-most creatively awarded country in the world – behind the US once again but well ahead of Australia, Brazil and France.

Last year saw a stellar performance by Adam & Eve/DDB, which moved up one place to take joint second position (together with AlmapBBDO) in the most-awarded agencies in the world table. It is a double celebration for the shop as "Monty’s Christmas" for John Lewis has outshone a host of great commercials to become the most-awarded film ad in the world. The campaign was also joint fifth in the All Gunns Blazing table for the best integrated/innovative work globally and reached number two across all Gunn Report media categories. 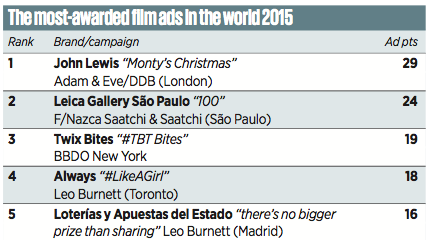 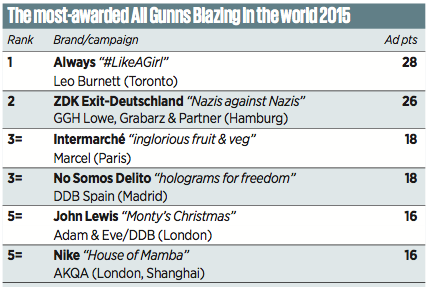 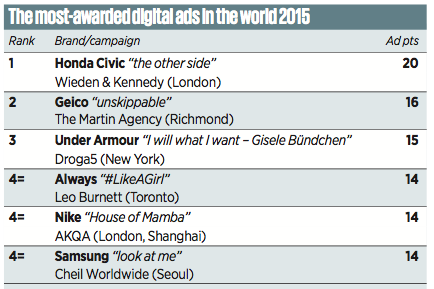 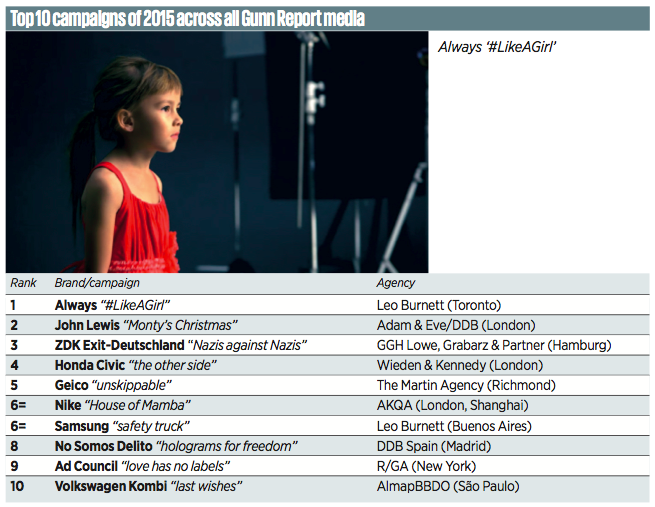 Other great UK performances include Sainsbury’s "Christmas is for sharing" by Abbott Mead Vickers BBDO, which was joint sixth in the most-awarded film ads table. The 28 Too Many campaign, by Ogilvy & Mather London, was the fourth-most-awarded print ad; Harvey Nichols "bad fit", by Adam & Eve/DDB, took seventh place in the same table. 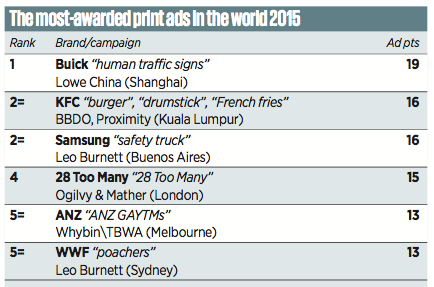 Equally impressive are the accomplishments by the UK production industry. Smuggler is ranked number one (up from seventh in 2014) – followed by Stink/Stink-digital, Blink and MJZ, which all have offices in London – in the most-awarded production companies in the world rankings. The UK’s Dougal Wilson is named the most-awarded director in the world (his previous best was number eight in 2012).

Overall, taking the crowning glory of the top ten campaigns across all Gunn Report media categories is the highly acclaimed Always "#LikeAGirl" by Leo Burnett Toronto. The campaign was also top in the All Gunns Blazing table, the fourth-most-awarded film ad in the world and joint fourth in the most-awarded digital ads list – a truly brilliant performance.

The car category continues to lead the way in the most-awarded advertisers table, with Volkswagen taking the top spot for the 12th time in The Gunn Report’s 17-year history (despite the car-maker’s troubles in the latter part of 2015).

In the agencies and networks leagues, BBDO pulled off a double. BBDO New York was top in the most-awarded agencies table. BBDO achieved its tenth win in ten straight years in the networks table – an exceptional display of consistency and excellence. Leo Burnett and DDB came second and third respectively. 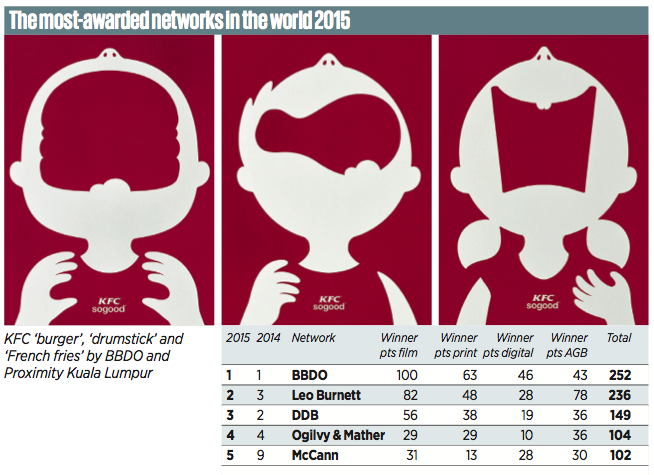 All in all, 2015 will go down as a very good year with lots of wonderful work – particularly, it seems, in All Gunns Blazing and print. The year saw a healthy mixture of consistency, with previous winners proving their greatness again, and surprises as new and future stars moved up the tables.

A strong year for the UK

To view The Gunn Report in full, subscribe to www.gunnreport.com